“Transition into a new phase of life can seem frightening; however these transitions can result in positive consequences. ” Discuss this statement with reference to two of Blake’s poems and the visual stimulus ‘Growing Up’. As an individual, we may feel daunted by the thought of moving into a new stage of life. However we must realise that change can in the long term result in positive outcomes, despite some negative experiences in the process. This feeling is explored in the poems ‘The Lamb’ and ‘The Tyger’ by William Blake.

Don't use plagiarized sources.
Get Your Custom Essay on Transition in William Blake’s Poems Just from $13,9/Page

In ‘The Lamb’, the poet tells us of his childlike beliefs about the nature of creation and faith. Looking at ‘The Tyger’ we see him starting to question both these beliefs. This leads him to a deeper understanding of the world, despite seeing the darker side of this transition. The infographic, ‘Growing Up’ by Jorge Estrada, Kasey Lum, Marisa Torres, and Alexander Badr from The Vancouver Film School, uses a variety of techniques to explore several aspects of the fears associated with the process of growing up.

In the ‘The Lamb’, Blake explores his childlike innocent understanding of the nature of Jesus and creation. This poem is one of the Songs of Innocence and uses a Biblical style reminiscent of the 23rd Psalm. Repetition is used as “Little Lamb I’ll tell thee” to bring out his definite views he has learnt from childhood. There is further evidence of this innocent belief expressed through the repeated use of “Little Lamb” an example of alliteration. This demonstrates the level of understanding he has of Christ, which is very similar to the simple style of language we use to teach a child about Jesus.

The childish imagery created in ‘The Lamb’ is parallel to the background illustrations in the ‘Growing Up’ infographic for example the green hills, blue sky, fluffy clouds. These pictures are very similar to how a child draws their natural environment, through their naive perspective of life. Therefore, when we are not moving into a new phase of life, how can we be fearful of anything? It is clear from Blake’s innocent perspective that we cannot be afraid of anything, unless we are moving into a new stage in our lives.

Growing up can cause us to challenge our beliefs, this is seen in ‘The Tyger’. In Blake’s Songs of Experience poem, there is clear evidence proving that we will likely feel daunted by the idea of moving into a new phase of life. Through Blake’s use of rhetoric questioning in “Did he who made the Lamb make thee? ’ we see how he is querying ‘the tyger’s’ creator. Despite that he does not get an answer, he still is sure that there is a creator, evidenced in “What immortal hand or eye, Dare frame thy fearful symmetry”.

Through this we can ascertain that he clearly has a fear of the creator and his faith. It is the different answers for his question that are overwhelming for him and cause him to challenge his childlike beliefs seen in “Did he smile his work to see? ” This questioning is frightening for him and is also seen in ‘Growing Up’ where these possibilities are symbolically represented three times, firstly when the screen is filled up with paper notes, as objects pilling upon the person, and when the dark clouds are closing around the person.

The paper notes are seen scrunched up, which would represent the fear of you ‘screwing up’ your life. The objects piling on the person represent the responsibilities you will have as you age, and the person is afraid of each one as it lands on the pile of responsibilities he has. The scene where the person is crying makes us fear the consequence of making the wrong decision. It is clear from the evidence revealed from both texts that personages can easily be fearful of making the wrong decision in a new stage of life, especially if they are inexperienced.

Ultimately the consequence of transitioning can be positive, despite experiencing some negative things in the process, however it is up to the individual to accept the challenges in order to reach a positive outcome. This transition Blake is in, shows us that our understanding will be broadened, seen when Blake challenges his child learnt beliefs expressed in The Lamb, and asks “Did he who made the Lamb make thee? ” in The Tyger. Moving through a stage akin to this, it is likely an individual will see the darker side of the world which is a negative experience.

If they accept this as a part of the process the end result of a transition is that you will no longer be naive therefore the individual will develop a better character. Through experience comes understanding, this is seen in ‘Growing Up’ through a line Visual Technique seen in the graph which examines how “the older you get, the more you’ll experience”. Having a positive attitude will lead to a good life as seen in “Growing Up’ in ‘embrace the dream, not knowing what will happen next. In a transition it is likely you will have a few negative experiences, but the result is always something positive and worthwhile persevering for. As an individual, we may feel daunted by the thought of moving into a new stage of life. However we must realise that change can in the long term result in positive outcomes, despite some negative experiences in the process. In the ‘The Lamb’, Blake explores his childlike innocent understanding of the nature of Jesus and creation. Growing up can cause us to challenge our beliefs, this is seen in ‘The Tyger’.

In Blake’s Songs of Experience poem, there is clear evidence proving that we will likely feel daunted by the idea of moving into a new phase of life. Ultimately the consequence of transitioning can be positive, despite you experiencing some negative things in the process, however you will have to accept the challenges in order for you to reach a positive outcome. Hence, if an individual is transitioning into a new stage of life, it is ultimately up to them to overcome what’s negative in order to get the benefits of the positive consequence. 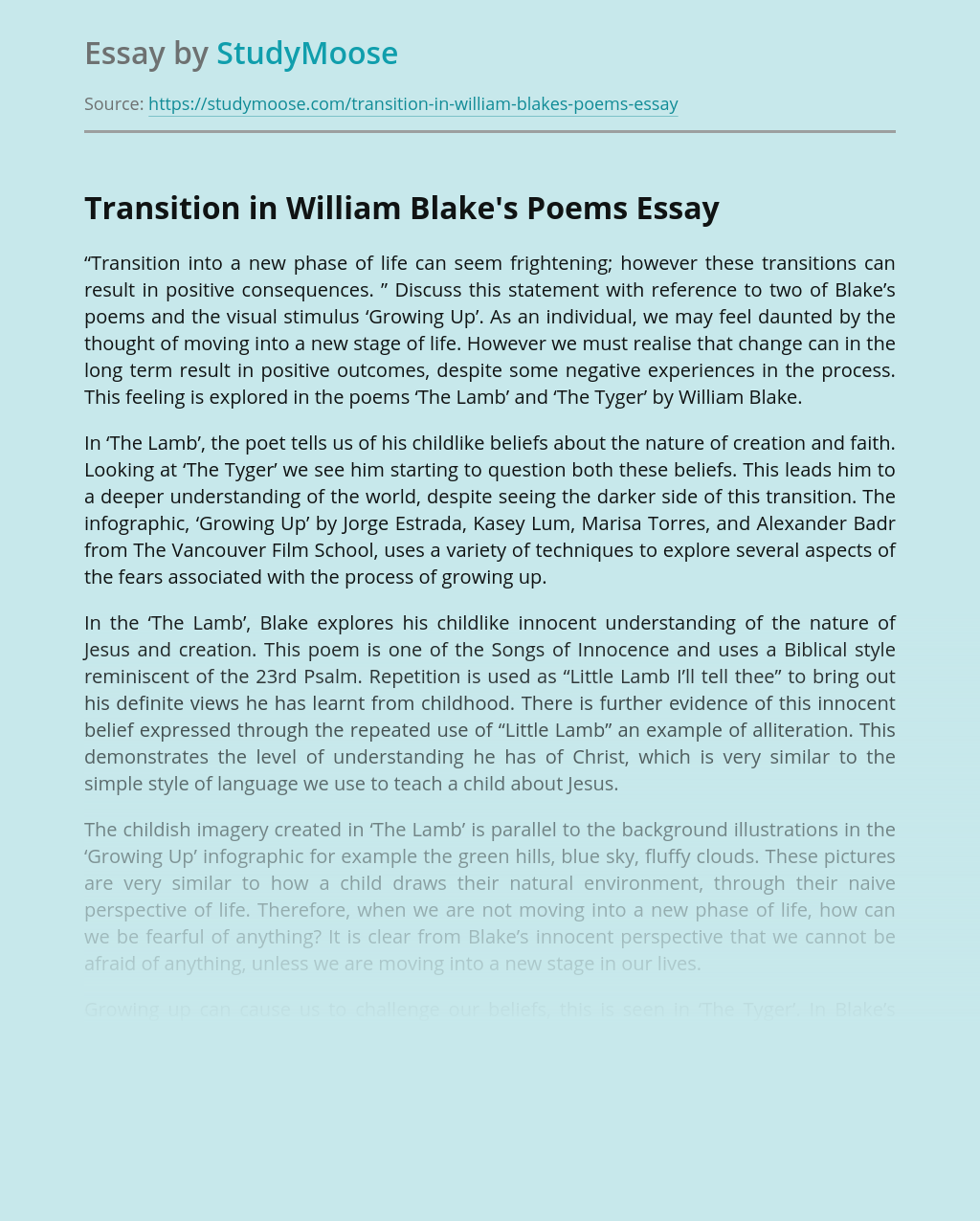 A Synopsis of the Movie I, Robot

I always asked myself if those stories about robots overcoming humankind will become real. Sci-Fi books are being my favorites since I was a kid and I watched every major movie about this subject. My favorites is “I, robot” that tells the story of a society in the future that relies on robots for all...

View sample
Death Of A Salesman-The Flute As A Motif

Death Of A Salesman The Flute as a Motif A motif is anything that occurs several times in the course of a literary work. Because they are repeated so often, motifs tend to show what is permanent in a character, a society or even the human condition. Even so, they also serve to establish a...

View sample
Get Essay
The Lord of the Rings

To begin describing my unlikely hero’s we first have to ask ourselves what makes a hero. Is it always a big, strong alpha male with a square jaw and cocky attitude? I hardly think so. I feel that a hero is someone who puts others needs in front of their own to complete whatever task...

This essay is an analysis of ‘The Monkey’s Paw’, a horror short story by William Wymark Jacobs. This story is about a talisman that shapes like monkey’s paw which has magical powers. It grants three wishes to its owner. It’s given to one family, husband, wife, and their son. They wish for some money, and...

Kate Chopin was an American author of short stories and novels. Considered as one of the earliest feminist authors of the 20th century, she was one of the most-celebrated female writers of her time. She wrote several short stories including The Story of an Hour (1894), Euphrase (1850), Mrs. Mobry’s Reason (1891), A Shameful Affair...