Toys for a Big Boys

Ronit Subramanian was seven years old and he was the tallest student in his class. It made him feel very proud. But when he remembered some of the things he used to do as a small kid, he felt a little shy. He wished his mother would not tell those stories to her friends again and again. Last week his mother’s old school friend had come to see her. They were meeting after 10 years. Ronit was just back from school but his ears pricked up when he heard his mother say in that goofy tone, “You know what my Ronit used to do as a baby?

He used to think everything and everyone was a part of the Subramanian family.

Don't use plagiarized sources. Get your custom essay on
“ Toys for a Big Boys ”
Get custom paper
NEW! smart matching with writer

“I wish mother would not do these things,” he said for the thousandth time. That evening his mother showed him the toys and games her friend had got for him. One stuffed dolphin and a game of blocks.

Ronit got angry. These are kids toys, kids toys and games. I am a big boy now. My hero is Spiderman. That’s the toy I want for my birthday this year. Spiderman and the spray that makes the spider web. ” “Are you saying you no longer want your favourite stuffed toy – pepper the doggy? ” Ronit’s mother asked.

They bought him a Spiderman T-shirt and trousers, a shiny Spiderman toy and a glove with a spray bottle attached to it. “Wear the glove and then press the spray button. It will make a web pattern on the wall, Ronit’s father said. Ronit, and even his father, were so excited with the spray that they used it again and again to see who could make a bigger web! There was even a Spiderman cake. After his friends left, Ronit opened up each gift package. Yesssss! He was a big boy now. He had got so many presents of toys and games and they were all for big boys.

He especially like a Lego set that made a battery-powered robot, a snazzy car racing video game, and, best of all, a cool skateboard. Ronit went to sleep clutching the Spiderman. You see he had decided he no longer wanted his favourite stuffed toy, Pepper doggy. As soon as his head hit the pillow Ronit fell asleep. He now slept in a room of his own. A room with sunny yellow walls. But until yesterday, he had gone to sleep clutching Pepper doggy’s ear. The softness of the toy always made him happy. But Spiderman was a metal toy. It was cold to touch.

At night, as Ronit’s blanket slipped down the bed, the cold metal of Spiderman poked him. Ronit dreamt that he was being chased by icy monsters who were out to freeze him into a statue. In his dream he shouted for Pepper. Not finding Pepper, woke up screaming crying. His mother heard him whimper and came rushing into his room. “I want Pepper. He is my friend. Big boys also have doggy friends” cried Ronit. Pepper has crept back into Ronit’s bed. Every night, Ronit and Pepper have a new adventure. In his dreams, Ronit sees Pepper in a Spiderman outfit. Isn’t that cool? 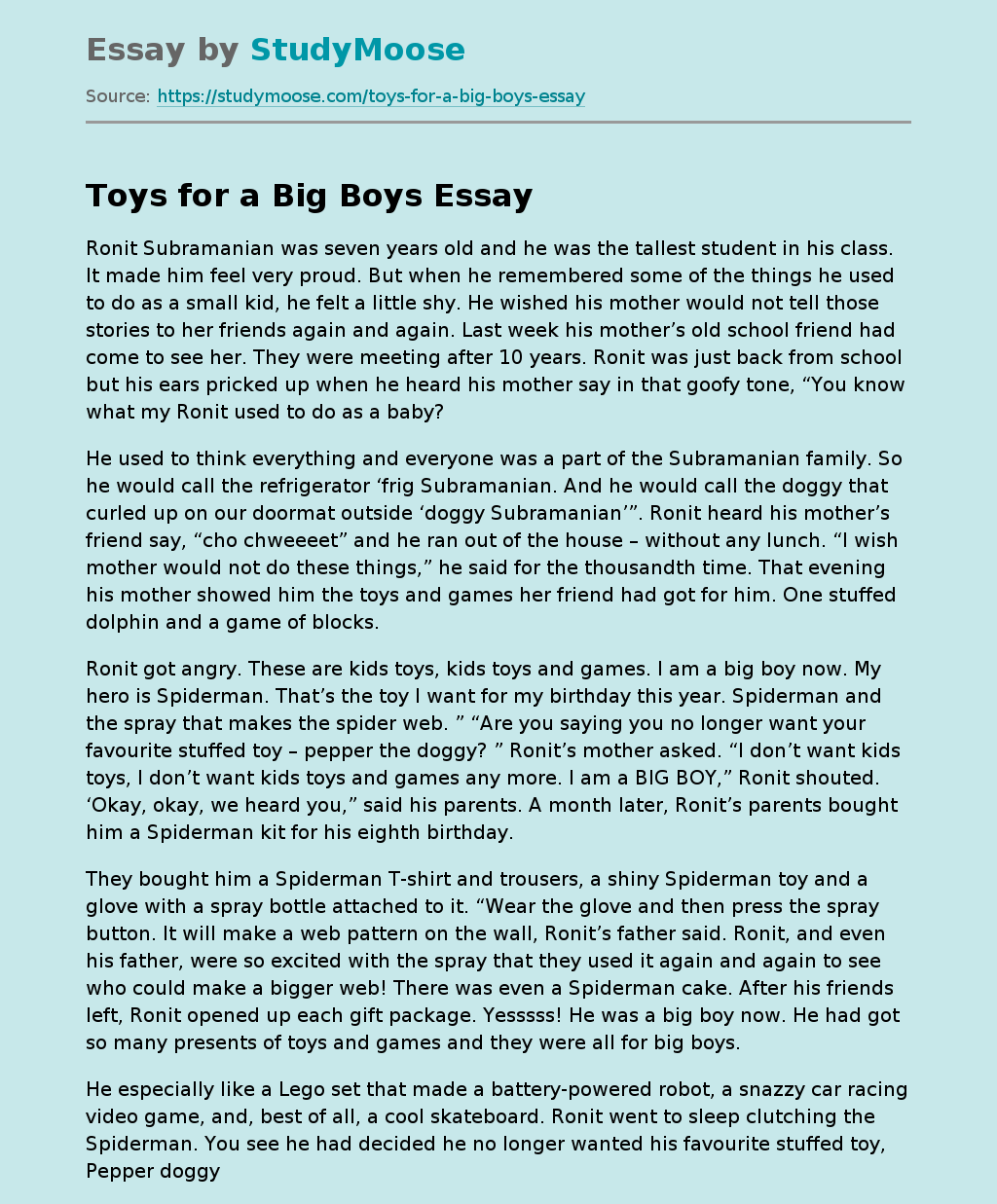