It is practical for Tom to use his wealth in order to impress Daisy, rather than more complex traits such as personality. Another example of the practical nature of Tom, including his wife, is shown in a scene after Myrtle gets hit by a car and Daisy admitted that she loved Gatsby. Nick states, “They [Tom and Daisy] weren’t happy… and yet they weren’t unhappy either. There was an unmistakable air of natural intimacy about the picture, and anybody would have said that they were conspiring together” (Fitzgerald 152).

Don't use plagiarized sources. Get your custom essay on
“ Tom Buchanan and Jay Gatsby ”
Get custom paper
NEW! smart matching with writer

The fact that Tom is rich and powerful allows them to push things over that would normally disturb any normal human being. The relationship between Daisy and Tom is one of convenience because they are both absorbed in their own superficial worlds and they are able to get by through their use of money. Tom and Gatsby differ greatly in their personalities because Gatsby chooses to live a life of struggle to obtain his dreams, while Tom simply does whatever is convenient for him at the time.

The final contrasting difference between the two unequal characters lays within the opinion of Nick the narrator.

Nick believes that Tom is an immoral character that uses people to only better himself. Nick expresses his disgust of Tom when he states, “They were careless people, Tom and Daisy-they smashed up things and creatures and then retreated back into their money or their vast carelessness, or whatever it was that kept them together, and let other people clean up the mess they had made” (Fitzgerald 186)… The cold-hearted Tom only wished to benefit himself, no matter if it meant harming people in his path.

After Nick confronted Tom about the murder of Gatsby and suicide of Wilson, Tom simply responded:

I told him [Wilson] the truth,… He came to the door while we were getting ready to leave, and when I sent down word that we weren’t in he tried to force his way upstairs. He was crazy enough to kill me if I hadn’t told him who owned the car. His hand was on a revolver in his pocket every minute he was in the house- … What if I did tell him? That fellow had it coming to him” (Fitzgerald 185 &186). Tom covered up the fact that Daisy was driving the car, which ultimately leads to the holocaust at the end of this story.

Tom’s cruel and destructive way of thinking was not shared by Gatsby. Gatsby only wanted to pursue his dream of wealth and love. He wanted Daisy more than anything else in the world, and he perused her until his final breath. On the subject of Gatsby, Nick thought that “Gatsby turned out all right in the end; it is what preyed on Gatsby, what foul dust floated in the wake of his dreams that temporarily closed out my interest in the abortive sorrows and short-winded elations of men” (Fitzgerald 8).

Nick believed that Gatsby’s determination brought about negative characteristics such as greed and breaking the law, but in the end he felt that Gatsby was not a bad person. Nick shows further support for Gatsby at the end of the book when stating, “They’re a rotten crowd [Nick, Daisy, and Jordan]… You’re worth the whole damn bunch put together” (Fitzgerald 160). These words were some of Nick’s last statements that he said to Gatsby before his tragic murder. Nick emphasizes his negative opinion for Tom and subtle support for Gatsby after being exposed to the twisted workings of upper class society.

In conclusion, contrasting Tom Buchanan and Jay Gatsby develops the central theme of class in The Great Gatsby through the perspective of Nick Caraway. The 1920’s were a time of rapid economic growth and people like Gatsby wanted a share of what people like Tom owned. The contrast between Tom and Gatsby reflect the two ways of achieving wealth: being born into a rich family, or making your own success. Nick reflects at the end of the book that “Gatsby believed in the green light, the orgiastic future that year by year recedes before us. 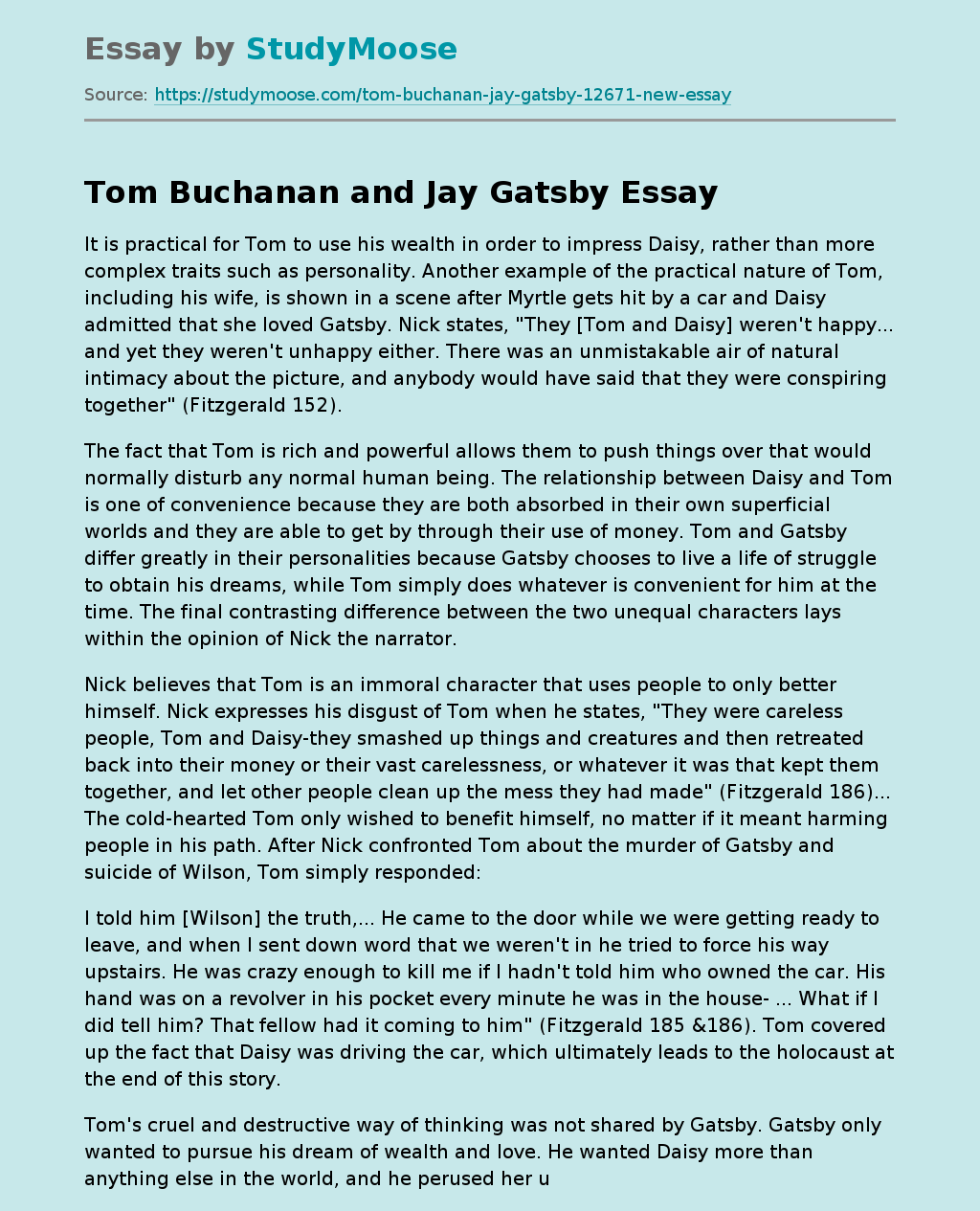