I plan to argue “To Room Nineteen” by Doris Lessing for an audience of professors interested in the field of psychology and it’s affect on women’s lives, stating that the cause of suicide for Ms. Dubois is not because of the social judgments and perception negatively that impacted Susan’s domestic responsibilities but rather the lack of emotion within her life and her relationship with her husband, because she could live up to the ideals valued by culture and beliefs but deep down she married for the benefit of others and no love in their relationship or with her children.

Don't use plagiarized sources. Get your custom essay on
“ To Room Nineteen Crytical Analysis ”
Get custom paper
NEW! smart matching with writer

Traditionally in the mid twentieth century, women held various duties that were crucial to keep their households intact. Most have sacrificed much of their freedom and independence to nourish their family. Women were accountable for food, cleaning, support, and other motherly resources. The novel revealed Susan’s transformation from the beginning of the novel as a calm and tranquil mother into a strange and insane person.

Matthew and her children depended on her to provide for their everyday necessities and without her the family will not function properly. The burden forced upon Susan caused her excessive desire for peace and serenity in the most remote place she can find. In “To Room Nineteen”, Lessing describes how stress and anxiety linked to Susan’s mental illness.

Susan encountered many obstacles emotionally and psychologically. One of the challenges she faced was quitting her job as a commercial drawer so that she can supply more of her time and effort into her family.

“She cooked and sewed and worked as before, day after day, while Mrs. Parkes remonstrated”(2765) Every moment, hour, minute, or second her husband and children needed her service, therefore she performed these numerous tasks in order to maintain the household. Since she was always confined at home taking care of her family, she does not have much contact to the outside world as she did before. “She was a prisoner.”(2766) Susan was excluded from her community seeing as she was bound to her loads of responsibilities. The only way she feels connected to the public is threw her husband, Matthew, informing her of the upcoming events or issues that was brought up.

Susan and Matthew Rawlings was considered as “well matched”(2759) pairs in her society. “The Rawlings appear to have everything that a couple could want; having married late “amid general rejoicing”, they have four healthy children and create what seems to be a stable and comfortable home.”(Lance St. John Butler) Other couple looked up to them for counsel and guidance through their relationship. This adds on a great weight of pressure on Susan’s shoulder for she is claimed to have the perfect married life. This was challenging for her since she discovered Matthew had deceiving affairs with another women. It was difficult for Susan to pretend to accept Matthew’s reckless betrayal.

“Susan forgave him, of course. Except that forgiveness is hardly the word.”(2761) She try to push this problem behind so that she would not have confront the chaos of her marriage. “Charting the failure of communication and subsequent decline of love.” (Janina Nordius) Matthew and Susan’s relationship begins to slowly deteriorate as lies and deceit plies in their marriage. These are all factors that contribute to Susan’s aspiration for solitude, so that she can get away from all the tension and hassles.

Susan’s pursuit for peacefulness and isolation is driving her mad since she is always surrounded by overwhelming commotion. Mrs. Parkes, the housekeeper, is constantly asking for Susan’s approval for everything that she does. Her hesitations and uncertainties especially aggravate Susan because she feels like people are always depending her on every little issue. “She was planning how to be somewhere where Mrs. Parkes would not come after her with a cup of tea, or a demand to be allowed to telephone (always irritating Susan did not care who she telephoned or how often), or just a nice talk about something.”(2765-2766) This is one of the reason why Susan have an eager craving for loneness. Also Sophie, the Rawlings’ household worker, replaced Susan’s position in the family.

Ever since Sophie was welcomed into the family, she has been more of a mother, wife, and mistress of the house than Susan, which caused her to feel out of place. “She took lunch with Mrs. Parkes, Sophie, Sophie’s Italian friend Maria, and her daughter Molly, and felt like a visitor.”(2777) It gives her the impression that she was invisible and separated from her family. In addition, her four children require her complete attention to tend for them so that they would grow to be strong and healthy adults. “She was breaking her part of the bargain and there was no way of forcing her to keep it: that her spirit, her soul, should live in this house, so that people in it could grow like plants in water, and Mrs. Parkes remain content in their service.”(2772) As long as she’s their mother, she will continuously put all her energy to raise her children. She could not deliver all these requests to nurture her children, so she decides to abandon her duties. Seclusion is a major aspect that influences a person to become odd and bizarre.

Women’s freedom and liberation are restrained because of the principles followed by customary lifestyles. “Doris Lessing draws extensively on women’s inner, private experiences and on their departure from the unsatisfactory reality of life in an alienated and alienating society.”(Rula Quawas) Ever since Susan was married, she does not have her independence to do something that will benefit herself because she is confine by her burdens of her household obligations. “What it amounted to was that Mother’s Room, and her need for privacy, had become a valuable lesson in respect for other people’s rights.”(2768) She wanted space where she can have her solitude and time to release her pain. Therefore she deserted her responsibilities and detained herself in regions that people will not come to disturb her. Such as the Victoria Hotel to find some relief from all the stress she carries.

“The room was ordinary and anonymous, and was just what Susan needed.”(2769) The amount of pressure she undergoes, Susan requires more alone time to obtain the peace that she wants. Therefore she searches in the mountains to escape the resentment and bitterness. “The mountains themselves seemed trammeled by her unfreedom.”(2771) Even though there is an enormous distant between her and her family when she has taken a vacation, her family still interrupt her break because the household was going to breakdown without her.

These distresses bring about her hostility and sourness. Susan needed to locate a place where no one will bother or remind her about her household duties. Fred’s hotel in room nineteen was the only place she was able to acquire her freedom. “This room had become more her own than the house she lived in.”(2774) There she felt at ease and comfortable releasing out all her troubling complaints about not being open to the world. She can forget about her family and society holding her back from her independence. Her hunger for freedom will drive her over the boundary, even suicide, to get away from it all.

Society’s values about people’s lifestyle caused Susan a great amount of mental disorder. For instance, Susan has developed an imagery evil demon haunting her garden. The demon represents her suffering and misery inhibiting her to obtain her freedom. “He is lurking in the garden and sometimes even in the house, and he wants to get into me and to take me over.”(2768) Once she was in Fred’s hotel room, the demon was gone. But when Matthew discovered her going to Freud’s hotel and assumes that she has been cheating on him, the demon returns to visit her.

Also the snake in her garden characterizes her dual personality. “the illusion symbolized that her schizophrenic psyche had been on the verge of corruption.”(Wang and Wen) Susan’s psychological conditions worsen as she starts to visualize snakes lingering her garden. Still when she brushes her hair it makes hissing noises similar to a snake signifies her illness is getting more severe. In addition, the mirror in her room signifies that her schizophrenia symptoms are getting critical. “Yet that’s the reflection of a madwoman. How very strange!”(2771-2772) Her other self is representing her bitterness and resentment. These are distresses that Susan is experiencing because of pressure put upon her.

The attitudes towards women’s role in society required them to be the providers of their family while the men were to work to supply financial support. “Susan Rawlings experiences a battle of wills between her mental consciousness, which insists that she accept her tradional role as a wife and mother, and her blood consciousness, which sparks her quest for absolute freedom.”(Wendy Perkins) Most women suffered from depression and agony because of their gloomy life style. Their freedom was taken from them, as well as their identity. They had no choice but to serve their family and support their husbands. Susan Rawlings burdens influence her to search for independence and avoid her responsibilities. The only way she could depart from her duties was to commit suicide and leave the world that caused her sorrow. 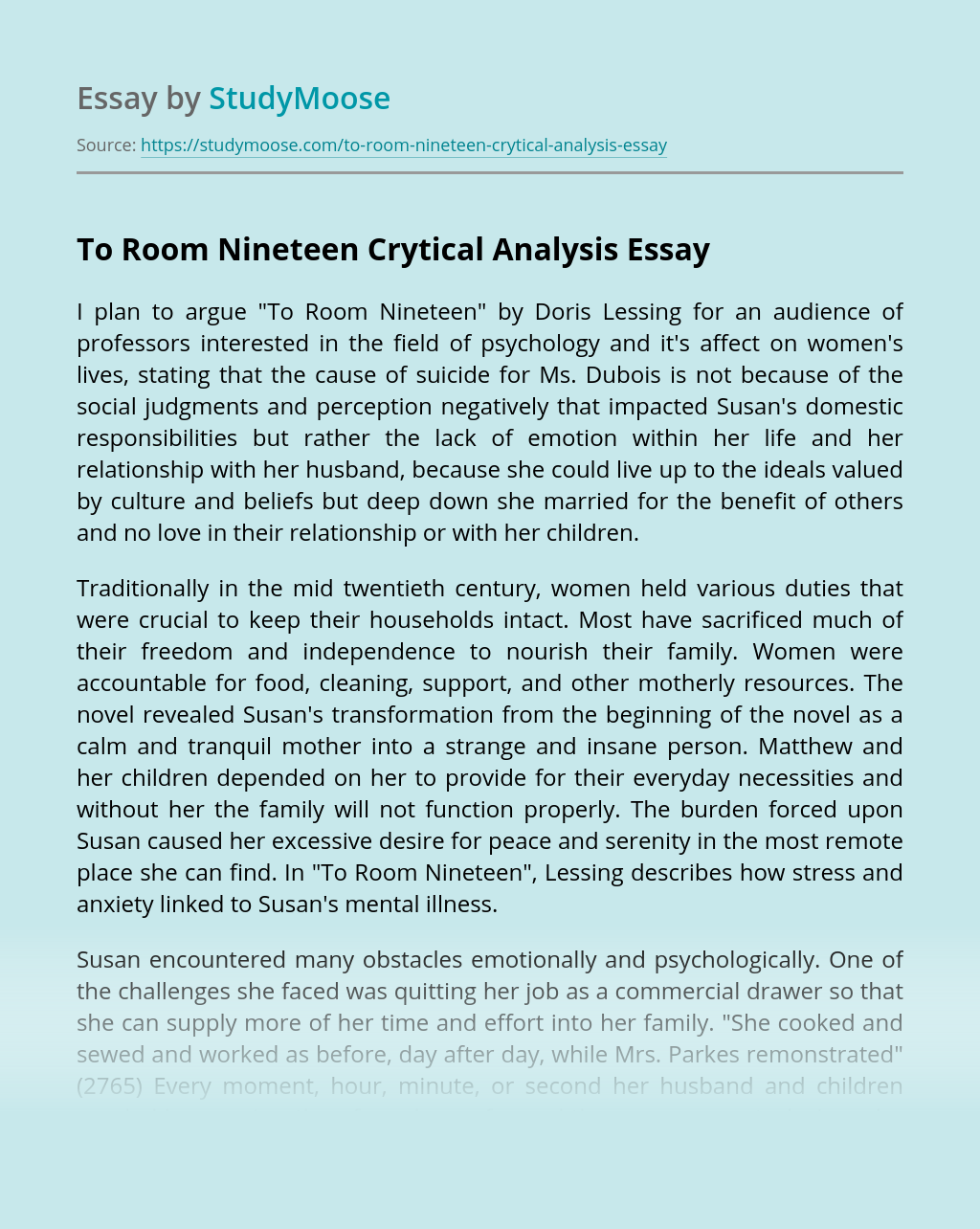