To Kill a Mockingbird Essay
We all grow up after a while. It’s just a part of life and maturing. This book is all about kids maturing and learning life lessons to learn more of the world and the way society works. They find it hard at first and don’t understand certain things and why people act the way they do. Sometimes, they will go to investigate something they saw and that can either give them clarity or give them more questions.

Don't use plagiarized sources. Get your custom essay on
“ To Kill a Mockingbird – Jem’s Maturity Growth ”
Get custom paper
NEW! smart matching with writer

A lot of the time these investigations have consequences as well but I guess that’s how kids learn what is good and what isn’t. To Kill a Mockingbird is about two kids, Jem and Scout Finch. Their Dad’s name is Atticus Finch, a lawyer defending a black man accused of raping a young white girl. Due to this, the whole family is resented and out-casted in the town. I will be talking specifically about Jem and the way that he matures over time by things that happen to him, things he hears and see’s and consequences he has to do.

Throughout the book you experience Jem’s journey through maturity and you see how he learns about how the world works at that time such as: when they want to go see Atticus defending Tom Robinson in the court case.

They don’t think that the court case will go how it does, with everyone being so easily swayed even though Atticus has made clear evidence that Tom is innocent.

The children are both really surprised at the outcome and the way that that people treat Tom, such as how Mr Gilmer speaks to Tom during the court case. He is so disrespectful and rude to him that it makes Dill feel sick and cry, so much so that they have to leave the courtroom. (– Page 219 – ) You also see that as Jem matures his view on many things change as he learns how things actually are instead of what he thought they were originally. One example of this is in chapter 10 when his views about his father, Atticus, change. Originally, in the first few chapters, Scout and Jem described Atticus as a man who never does “anything that could arouse the admiration of anyone”. (pg. 102) This view changes for Jem especially in chapter 10 when Atticus shoots the mad dog and impresses Jem with his shooting skills and the fact he saves the town from the dog. Another big example of Jem’s growth as he learns is in relation to Boo Radley. In the beginning of the book, it talks a lot about the whole “Boo Radley is Mad” myth.

The children get extremely frightened of him as they hear more and more about him and their imaginations get the better of them. They get more and more curious as time goes on, trying things like sneaking up to his door and knocking it or sneaking into his backyard and looking inside his back windows. But as the book progresses and they get more and more curious of Boo and do riskier and riskier things, they find out he isn’t actually that bad at all. When Jem sneaks into Boo’s backyard, his pants get caught on the fence. He goes back for them afterward and finds them stitched up and folded over the fence. That is the first time he has different thoughts about Boo and thinks that maybe he isn’t what people say. More and more evidence about Boo Radley appear over time such as, he leaves toys and other objects for them in a hole in one of the trees on their street. Jem and scout both start to have different ideas on him and even start to like him. Their opinion of him get fully confirmed when he saves Scout with the help of Jem. This shows Jem maturing in 2 ways: he saves Scout without even hesitating and that shows courage and fearlessness which he didn’t have in the first place. Also, he shows maturity by becoming more open-minded (unlike many other people in the town who are very much “close minded” people) about Boo and discovering his true side and he is actually not like people say. Overall, Jem’s maturity is very distinct and you follow his journey as he learns more and more about how to treat people, how the world works and learns different things from his mistakes. He learns how to act in certain situations, not to judge people by what others say and how to have his own opinion on subjects and not to be swayed by others. 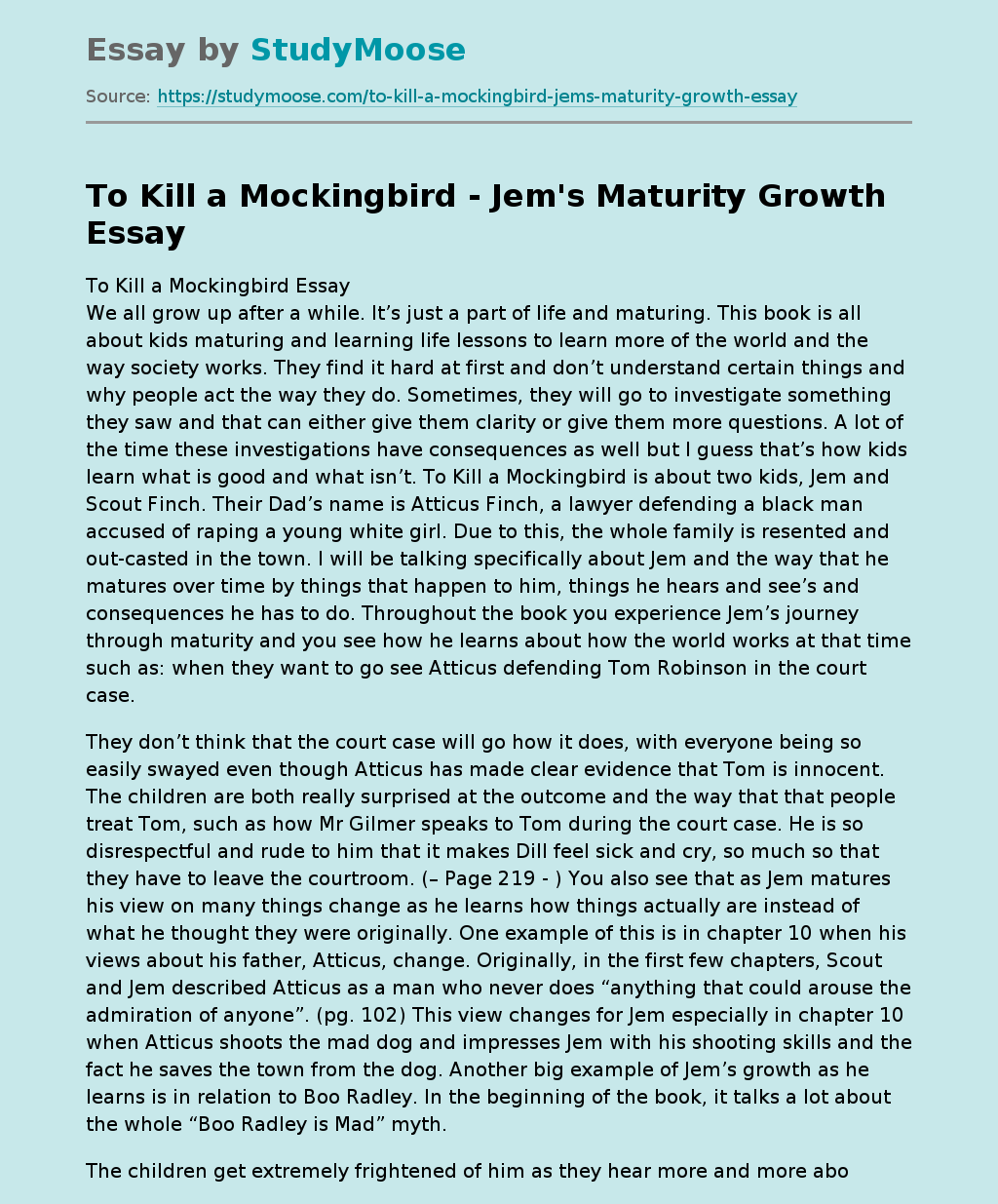