“To Kill A Mockingbird”, by Harper Lee

Don't use plagiarized sources. Get your custom essay on
“ “To Kill A Mockingbird”, by Harper Lee ”
Get custom paper
NEW! smart matching with writer

To begin with, Atticus Finch’s actions contribute to the theme. Harper Lee uses Atticus, in the novel, to show compassion when he is asked to justify a man named Tom Robinson. Atticus makes the comments, “I’m simply defending a Negro-his name’s Tom Robinson…It’s a peculiar case-it won’t come to trial until summer session” (Lee 100). Atticus’s comment reveals that he will be defending an African man in a town full of racism and prejudice.

With this in mind, he gladly takes the case, knowing that he would lose and open his family up to danger and ridicule. Deep down Atticus knew that Tom was innocent because he couldn’t have raped Mayella due to the fact that his left arm is crippled. Thus, showed Atticus’s compassion towards Tom Robinson. In addition, Atticus further explains to Jem what happened between him and Bob Ewell. Atticus’s simple explanation brought out the sympathy he felt towards the Ewell children.

Atticus tells Jem, “I destroyed his last shred of credibility at the trial,… So if spitting in my face and threatening me saved Mayella Ewell one extra beating, that’s something I’ll gladly take” (Lee 293). To elaborate, Bob Ewell needed to vent out his frustrations on Atticus because Atticus had embarrassed him during the court trial. Not to mention, Atticus was more than willing to put up with Bob Ewell, if it meant that he would be saving Mayella Ewell from getting beaten. Which further showed his compassion towards the children in the Ewell family, who are left to deal with a drunken and violent father. Therefore, the novel’s theme is set by the character of Atticus Finch.

Furthermore, Boo Radley, the Finch’s neighbor, also demonstrates the novel’s theme. Harper Lee uses the mysterious and violent character, Boo, to foreshadow the theme when he covers Scout with a blanket. Jem, who saw everything that happened that night said to Scout, “Boo Radley. You were so busy looking at the fire you didn’t know it when he put the blanket around you” (Lee 96). In this case, Jem and Scout were woken up by their father, Atticus, when their neighbor Miss Maudie’s house catches on fire. The children were then instructed to evacuate the house and stand by the Radley fence as most of the town showed up to put the fire out. Although Scout and Jem were both busy looking at the fire, Jem didn’t think twice when he saw Boo Radley place the blanket on Scout. Therefore, Boo shows compassion towards Scout by taking action and covering her up as a sign of him protecting her from the cold. Scout, now fully aware of what Boo had done, had a change of thought because Boo is not the bad person she perceives him to be after all. However, Boo also demonstrates his compassion towards the children when he saves them from almost being killed. Scout, who was still confused with what was happening said, “The man was walking with the staccato steps of someone carrying a load too heavy for him. He was going around the corner. He was carrying Jem” (Lee 352). To add on, Scout and Jem were walking home from the Halloween pageant when they began to hear the footsteps of someone following them. Scout and Jem began to stop to hear if the footsteps stopped and walked to hear if the footsteps continued. As soon as their assertions that someone was following them were confirm, they began running, which was the start of everything going downhill. Then, it was not too long until the children realize that the person chasing them was no other than the evil man himself, Bob Ewell. From there Boo realizes that the children are in danger. Thus he shows compassion by emerging from his home and killing Bob Ewell to protect the children from being stabbed. All in all, Boo Radley contributes to the final theme of the novel.

Overall, the author, Harper Lee, uses the static character, Atticus Finch and the dynamic character, Boo Radley to reveal an overlying theme of compassion. Atticus Finch is a lawyer and father to two children, Jem and Scout. While, Boo Radley is the Finch’s half man, half monster neighbor, who is a local legend in, Maycomb, Alabama. Events like how Atticus took Tom Robinson’s case, Atticus explaining to Jem why he allowed Bob Ewell to spit on him, Boo covering Scout with a blanket, and Boo saving Jem and Scout from Bob Ewell all lead up to the theme of the novel. To conclude, the various actions of Atticus Finch and Boo Radley allowed the reader to get a better understanding of the novel’s theme.

“To Kill A Mockingbird”, by Harper Lee. (2020, Jun 02). Retrieved from https://studymoose.com/to-kill-a-mockingbird-by-harper-lee-4-essay 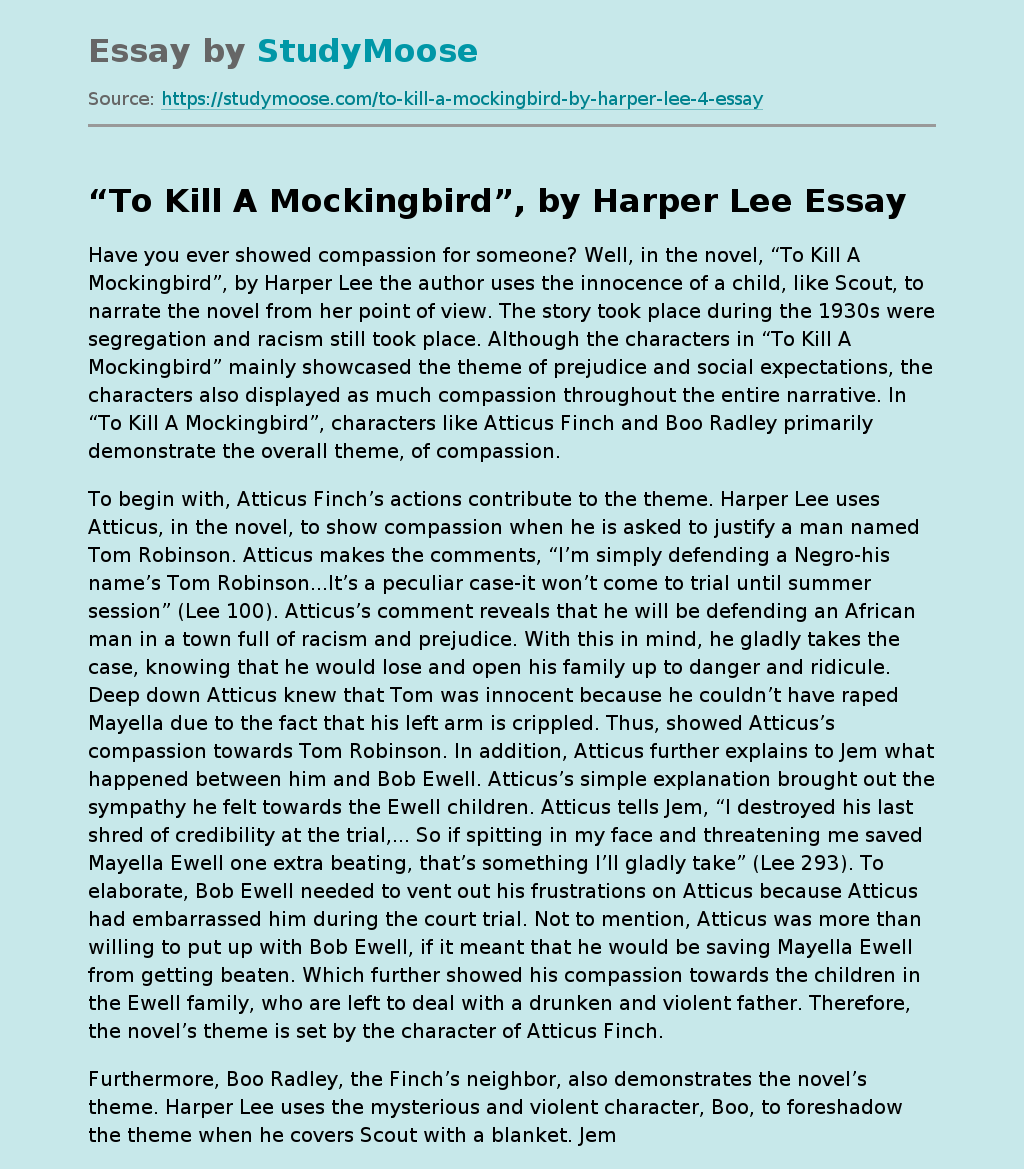