To Direct Or Not Direct

In Hamlet, like in many of William Shakespeare’s plays, there are very few stage directions. This gives directors an unavoidable opportunity to manipulate the audience’s view of the characters and the plot. The director always has the option to change the dialogue but in Hamlet, since there is little stage direction, one can have many varieties of the same scene using the same dialogue. Being a tragedy, Hamlet involves many complex characters such as Hamlet and Ophelia. Hamlet is the son of the recently deceased king of Denmark, avenging his father’s death after the visit from his fathers ghost accusing Hamlets uncle as his murderer.

Don't use plagiarized sources. Get your custom essay on
“ To Direct Or Not Direct ”
Get custom paper
NEW! smart matching with writer

Scene 3.1 involves the characters Hamlet and Ophelia that clearly have many internal emotions that can only be determined by their actions and tone. In scene 3.1, Hamlet recites his famous to be or not to be speech. In this speech Hamlet contemplates whether or not to live, “To be”(3.1.64), or to take his own life, “not to be” (3.

1.64). Written in this play Claudius, Polonius, and Ophelia are directed to not exit but to withdraw before Hamlets soliloquy. One way to have this staged would be to have only Claudius and Polonius withdraw and hide behind a curtain while Ophelia watches Hamlet enter because Polonius only addresses Claudius when he says, “(Let’s) withdraw, my lord” (3.1.63). Hamlet would enter in subconsciously knowing Ophelia is in the room. As Hamlet does his soliloquy, he never makes eye contact with Ophelia.

The reason for having Ophelia out with Hamlet rather than behind a curtain is to show the audience her change in mood as she considers Hamlets arguments he makes in his speech.

At first she is focused on her task her father has given her and by the end she is questioning, “Whether ‘tis nobler in the mind to suffer/ The slings and arrows of outrageous fortune,/ Or to take arms against a sea of troubles”(3.1.65-67). This scene is the turning point of Ophelia from sane to madness. This blocking for Ophelia is also foreshadowing her death. Staging how absorbed Ophelia is with Hamlets self-argument provides another and possibly greater reason she made the tragic decision of suicide. After Hamlet’s last line of his soliloquy there is a pause. Ophelia then snaps-out of her trance and then calls for Hamlets attention.

Now back to her task of discovering the source of Hamlets madness, Ophelia takes out the letter. In this part of the scene it can either be directed so that Hamlet may know Claudius and Polonius are watching or he may not. Staging it so that he does know fro early on in his and Ophelia’s conversation makes this scene more dramatic. Ophelia being timid would hint to Hamlet that there must be someone watching. The curtain Claudius and Polonius hide behind moves just in time for Hamlet to respond to Ophelia, “No, not I. I never gave you aught”(3.1.105). Ophelia now nervous and unsure panics. She glances her head slightly enough for the audience to see she is looking at where her father and Claudius spy. “Where’s your father?”(3.1.141), Hamlet asks suspiciously and angrily. To show Ophelia nervousness she trembles as she responds and hopes Hamlet did not catch her looking at her father again.

These subtle changes in direction and mood of the character make a huge impact of not only how the audience view each character but also changes their understanding of the play. If Ophelia were to confront Hamlet confidently and sure of herself, not only would it affect the audience’s view of Ophelia, but hamlet too. Hamlet would seem even crazier acting suspicious for no good reason. To be a director is to have the power to change an audiences perspective of a play that has been performed from either zero or over a million times or has been written a day ago or ages ago.

To Direct Or Not Direct. (2016, Mar 27). Retrieved from https://studymoose.com/to-direct-or-not-direct-essay 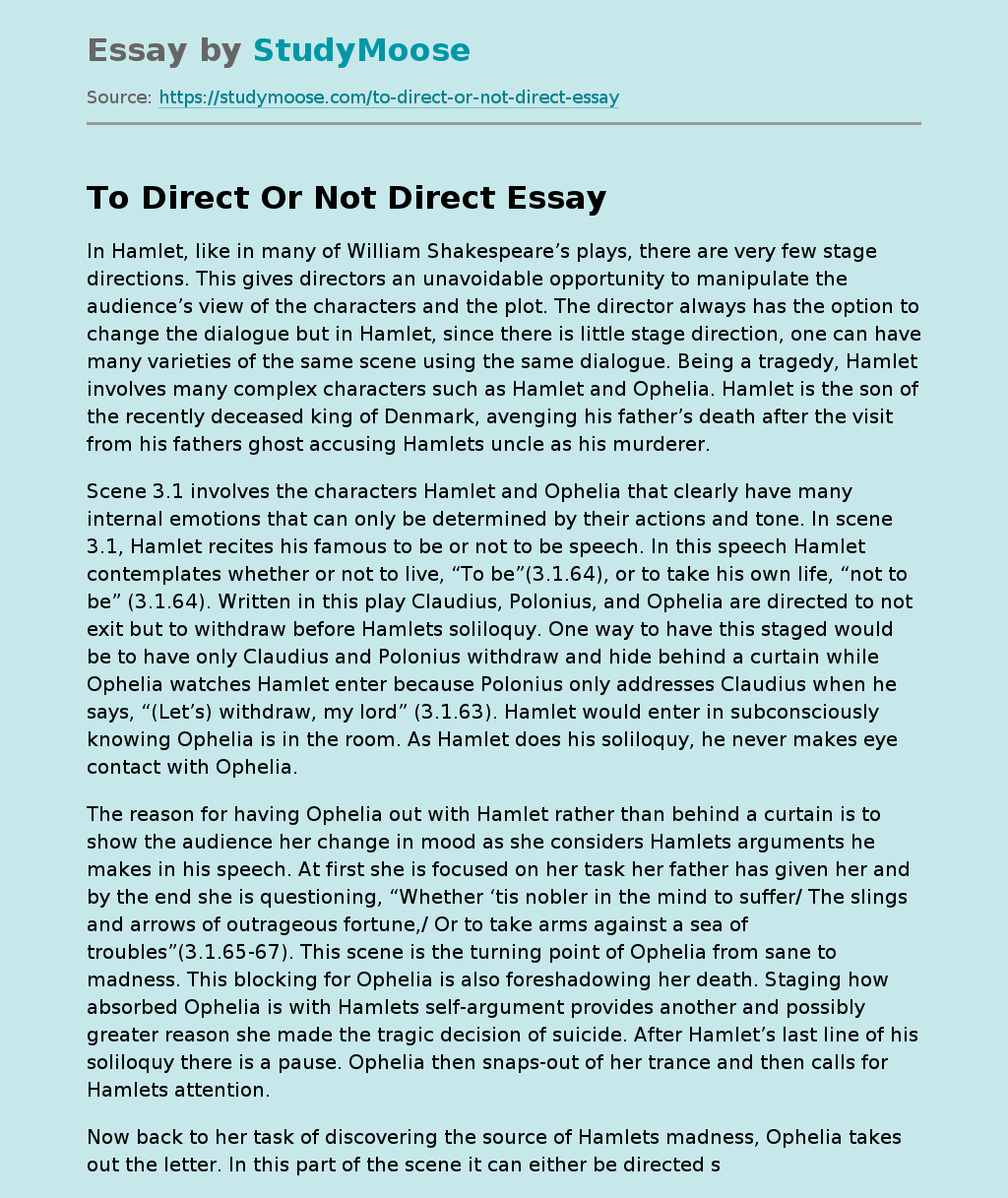