Time of the Hero by Mario Vargas Llosa If Alberto Analysis

If Alberto can be considered as the cadet with the most redeeming qualities and the one with the most positive character traits, then I would have to say that Lieutenant Gamboa represents his counterpart amongst the officers. His physical presence, fairness, courage and loyalty are omnipresent in the first part of the book.

From the very beginning of the novel Lieutenant Gamboa is described as tall, heavily built and muscular. These physical attributes endear him to the cadets in many ways.

Don't use plagiarized sources. Get your custom essay on
“ Time of the Hero by Mario Vargas Llosa If Alberto Analysis ”
Get custom paper
NEW! smart matching with writer

The presence of someone of such a dignified stature is totally absent amongst the other male adults in the book. He stands head and shoulders above his fellow officers, the school’s teachers, as well as the other male role models outside of the academy.

When the cadets fall in for morning inspection, he gives the last three to fall in a choice. He gives them the choice between corporal punishment (right angles) or points (a punitive measure to restrict individual liberties).

With each group he was just, “He told all of them. Take your choice”. This gave the cadets a sense of independence to make up their minds for themselves, involving them in a decision making process normally absent in a military academy. His sense of fairness is also displayed towards his fellow officers. Pitaluga, a hapless excuse for an officer is treated with consideration and respect by Gamboa, as the latter recounts a story, telling of Pitaluga’s fine marksmanship. What sets Gamboa apart from all the other officers is that he isn’t the least bit condescending.

Although he finds Petaluga sleeping he doesn’t judge him, but goes on to find a redeeming quality.

The author highlights this sense of mutual respect and courage when he transposes Gamboa from proctor during the chemistry exam to military maneuvers. His sense of leadership and bravery is shown in his symbolic heroism by commanding the boys in their battles against imaginary Chileans and Ecuadorians. We see his importance to the academy during the maneuvers when the Slave is shot. He is omnipresent and appears to be everywhere on the field. This displays his sense of omnipresence in the lives of the cadets. He is perhaps the father that many of these boys never had.

His sense of loyalty towards his cadets is shown when he states “I know them as if they were my own kids”. We can see his sense of loyalty in his outward sense of affection that he shows his wife. Obviously he is very much in love by the tone of his voice and his attentive nature towards his spouse. He’s loyal to his wife, his cadets, his colleagues and to himself. Therefore, this makes him a unique character in the novel. None of the personages in the book have this sense of equilibrium. His colleagues feel intimidated by him and are envious of the attention and respect her receives.

When Lieutenant Huarina hears of the Slave’s denunciation of Cava’s theft of the chemistry exam, one the first things that he’s worried about is if Gamboa had been told. Huarina’s moment of triumph must wait until the Slave tells him that he’s the first to know. This he considers a victory, but it’s an unmerited victory. Only Lieutenant Gamboa achieves the real victories, such as catching the cheaters, putting an end to the circle, leading his troops to fictional victories against fictional enemies and punishing cadets who merit their punition. In fact all of the officers are both physically and morally inferior to Gamboa.

There is one paradox to this so called perfect officer. When he is asked about the future profession of his son, he is quite unsure to the military fate of his future son. This uncertainty is a signal to us. Llosa presents us with the image of the perfect army officer, but this officer wouldn’t even want his own son to follow in his footsteps. Perhaps this can be explained by his sense of futility towards the big powers, the diplomats and the civilians. Or is it just that he wouldn’t want his son to make a career in this sort of absurd atmosphere of falsified values.

Time of the Hero by Mario Vargas Llosa If Alberto Analysis. (2020, Jun 02). Retrieved from https://studymoose.com/time-hero-mario-vargas-llosa-alberto-analysis-new-essay 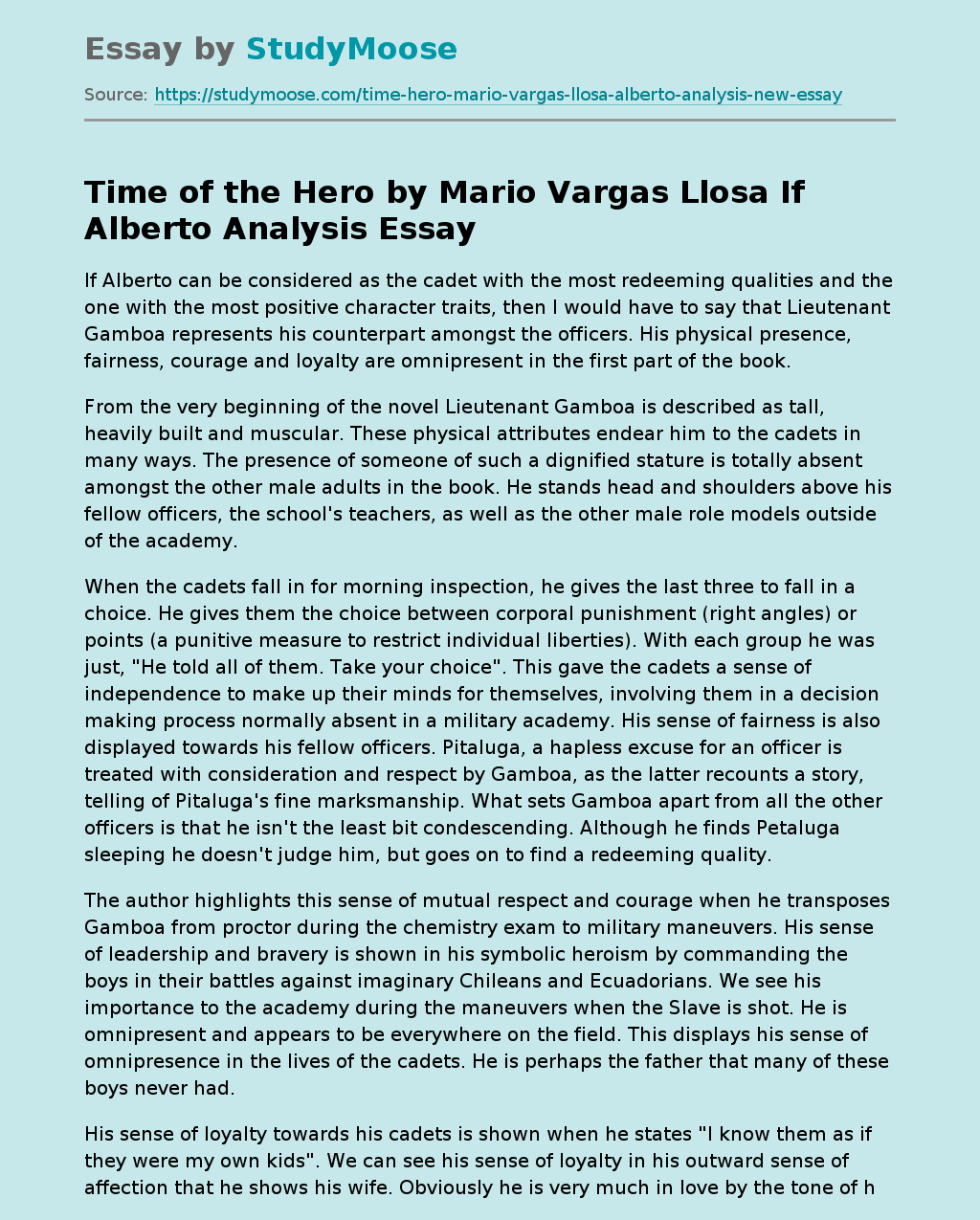