Three Generations talks about a Celo Monzon, whose unhappy childhood still haunts him even if he is already a father. At the beginning of the story, his wife tells him about their son’s plan to enter priesthood. He is also told about the call his sister has made because she no longer knows what to do with their sick father. At this point, readers are already given the impression that during this time, women’s role caters only to men’s needs and their children.

Don't use plagiarized sources. Get your custom essay on
“ “Three Generations” By Nick Joaquin ”
Get custom paper
NEW! smart matching with writer

It will be known later in the story that the sick father has been wild since he, Celo, has driven his latest woman away. So, in the setting of this story, it seems that having concubines is but normal. Sofia, Celo’s wife, has even been convincing him to allow the old man to have his girl back. She tells him, “Your father could never live without women . . . and now you have driven that one away.

It is death by torture.”12 This speaks about downright oppression of women as men are accepted in the society to have number twos, threes or fours while women are not. This is an obvious discrimination in the society, as women do not have the opportunities that men do.

This is somewhat like Shirley Chisholm’s “Equal Rights for Women” in which she says that, ” . . . Women that do not conform to the system, who try to break with the accepted patterns, are stigmatized as “odd” and “unfeminine.”13 Just like in the case of Celo’s calling his wife as vulgar when she tries to convince him that he allow his father to have what he wants.

As the story continues, he then remembers how his father has whipped him in his childhood. He adds that his own youth had been so unhappy because he lives in those times that “gave the head of the family absolute dominion over his women and children. . . They bowed to the paternal whip as long as they had to; then broke away to marry and breed and establish families over whom they had in turn set themselves up as lords almighty.”14

He also recalls the women in his father’s life that he “was never without two or three concubines whom he had whipped as regularly as he did his sons; but none of them, once fallen into his power, had bothered to strive for a more honorable status. If they went away, it was because the old man wearied of them; though at his bidding, they would return as meekly, to work in his house or in his fields, to cook his food, to wash his clothes, to attend to his children, and to bare their flesh to the blows of his anger or to the blows of his love.”15 His mother, on the other hand, had been “too thankful, worn out as she was with toil and child-bearing, for the company and assistance of these other women.”16

Definitely, the kind of society being presented in this story is the patriarchal one. Almost all women are oppressed and exploited through sex. Their confinement to the role of sex slaves and passive submission to a single man, unlike men, are often maintained by physical force.

As a boy, Celo had wept for his mother for all his father’s misdoing. He has since then detested him and, that afternoon, he goes to his father with his son, Chitong. They find the old man very ill. And it is right then seen how the two sons differ in treating their progenitor. Celo forcibly feeds the old man while Chitong has felt sorry for him that he has wanted to knock the tray from his father’s hands. Thus, Chitong realizes later that he must find the girl at whatever expense there is with his father.

It is said in the story that the poor woman has been whipped by Chitong’s father when she has insisted to stay beside the old man. When Chitong has found her again, she unhesitatingly goes with the young man to go to her old lover. This is quite telling of women’s stupidity and shallowness. The young woman has already received the greatest embarrassment in her life, by being whipped and chased by someone who has no right at all to it to her. And yet, she returns to the old man when she knows very well that the man who has demeaned her will be there. Yes, it may be courage for her to show up herself in the same house, but what for? To be someone’s sex slave again?

True enough, when she and Chitong have arrived, Celo is there. With the latter’s wrath at his son’s defiance, he has lain hands on him for the first time. He then realizes how he has become the father he has hated for so long and there realizes further that the slap has been his. At this, “the girl . . . slipped swiftly away from them and into the old man’s room, locking the door behind.”17

To wrap up the whole story, it is basically anti-feminist. Women, here, are portrayed as house and sex slaves of men. Women, like Sofia, Celo’s sister and mother, as well as the concubines, are expected to be home buddies, who must look after the domestic needs of the family, from cooking to laundering, and other chores. It is also implied in the story that women, though they are used like sex slaves of men, belong to the unintelligent species, as they return to them at the man’s bidding. The concept of men affording concubines, while women must only have one man, is also very anti-feminist, as there is no equality between them. It as if tells that women are “for the pleasure and assistance of men . . . that they should fulfill their natural ‘feminine’ functions; that they are different from men and should not compete with them.” 18

"Three Generations" By Nick Joaquin. (2017, May 30). Retrieved from https://studymoose.com/three-generations-by-nick-joaquin-essay 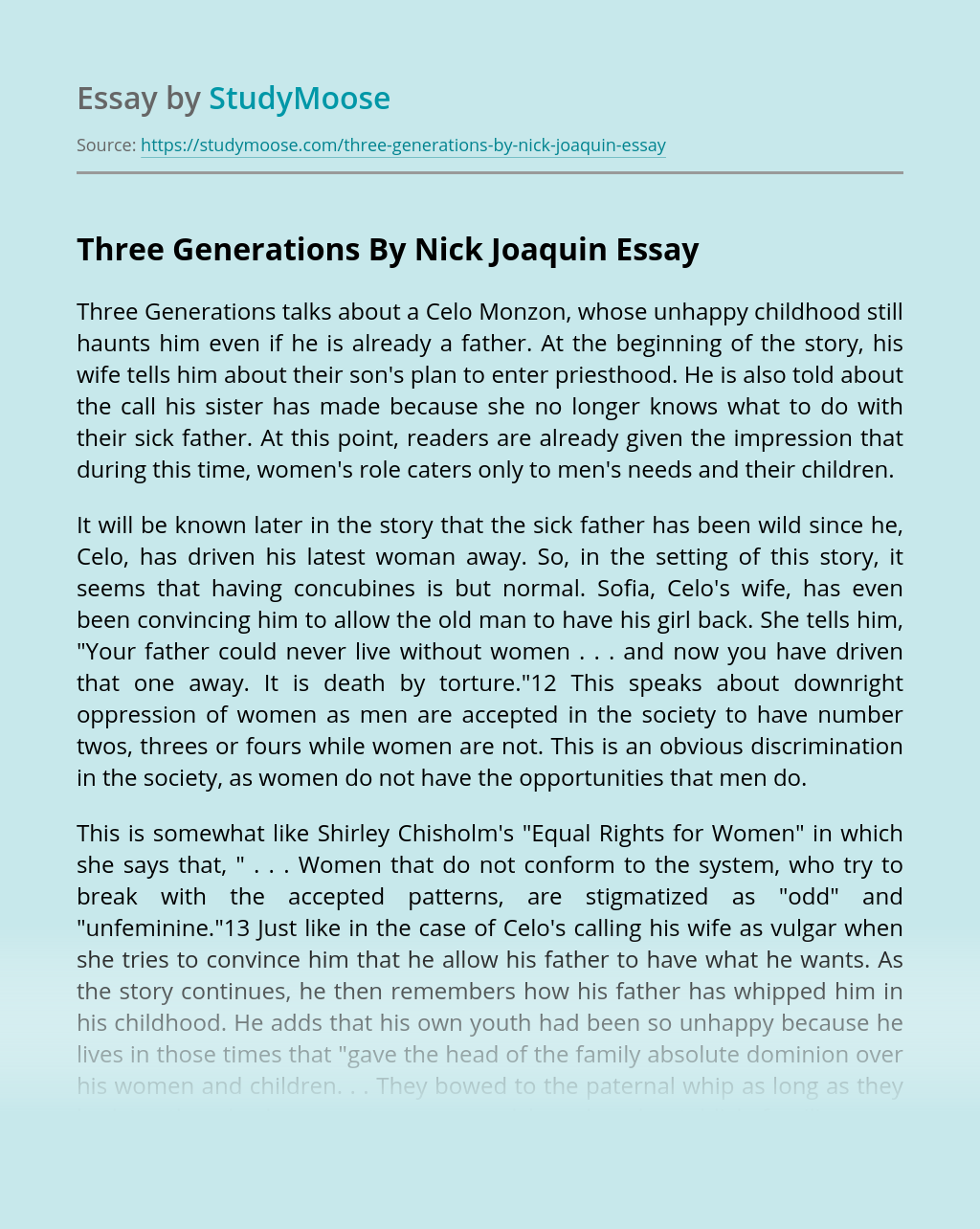