Think Before You Judge Frankenstein's Monster

The monster’s mature attitude towards people is demonstrated in his relationship with the De Lacey’s. After the monster was forced out of the village, he “fearfully took refuge in a low hovel” (132). His new home had “a wretched appearance after the palaces [he] had beheld in the village” (132). This hovel was attached to the De Lacey’s cottage. While living outside of the De Lacey’s cabin in the hovel, the monster observed the family and learned their ways of living.

Don't use plagiarized sources. Get your custom essay on
“ Think Before You Judge Frankenstein’s Monster ”
Get custom paper
NEW! smart matching with writer

The monster learned that the De Lacey’s would treat strangers with great respect.

This helped the monster believe that the De Lacey’s would treat him with respect as they did the other strangers. The monster wanted to help the family and become their friends. He did this by finding ways to “assist their labours” (137). The monster would cut wood for them to allow them more time to gather food. The monster lived there for a very long time and helped the De Lacey’s anyway he could.

Proficient in: First Impression Can Be Misleading

He would perform his helpful tasks at night while they were sleeping, so that the family would not see him and run away.

The reader would not have expected this kind act from the monster after reading Victor’s narrative. The monster does not want to live in solitude. He wants to interact with people and become their friend. His appearance makes this interaction difficult. With his “height so superior to thine; [his] joints more supple” (126), he is always going to be looked at as a creature.

As the monster explains his life, we begin to understand and feel sorry for the monster. The only reason he killed William, Victor’s brother, was to punish Victor for creating and abandoning him to complete solitude.

Angry with Victor the monster “declared everlasting war against the species, and, more than all, against [Victor] who had formed [him], and sent [him] forth to this insupportable misery”(161). The monster’s observations are a method for the monster to learn about the way he should act to become their friend. The way Victor treats people is very immature compared to the monster’s method of observation and adaptation. Victor treats people with disrespect. He does not write home for months at a time while he is on his travels.

He expects his family to be there for him, but he has no obligation to them. Anyone unfamiliar with Shelley’s novel Frankenstein has the idea that the monster kills people at random. In fact, the monster is a very kind and passionate person who only wants to be loved. It is the human nature to judge people by their first impression. We believe what we hear and it is sometimes difficult to change our initial perception. It is important for us to keep an open mind when we hear another person’s perception of an individual.

The most wonderful person you will ever meet may be the most disliked person by your peers. Frankenstein teaches us an important lesson; look with your own eyes, and think before you judge.

Think Before You Judge Frankenstein's Monster. (2017, Nov 03). Retrieved from https://studymoose.com/think-before-you-judge-frankensteins-monster-essay 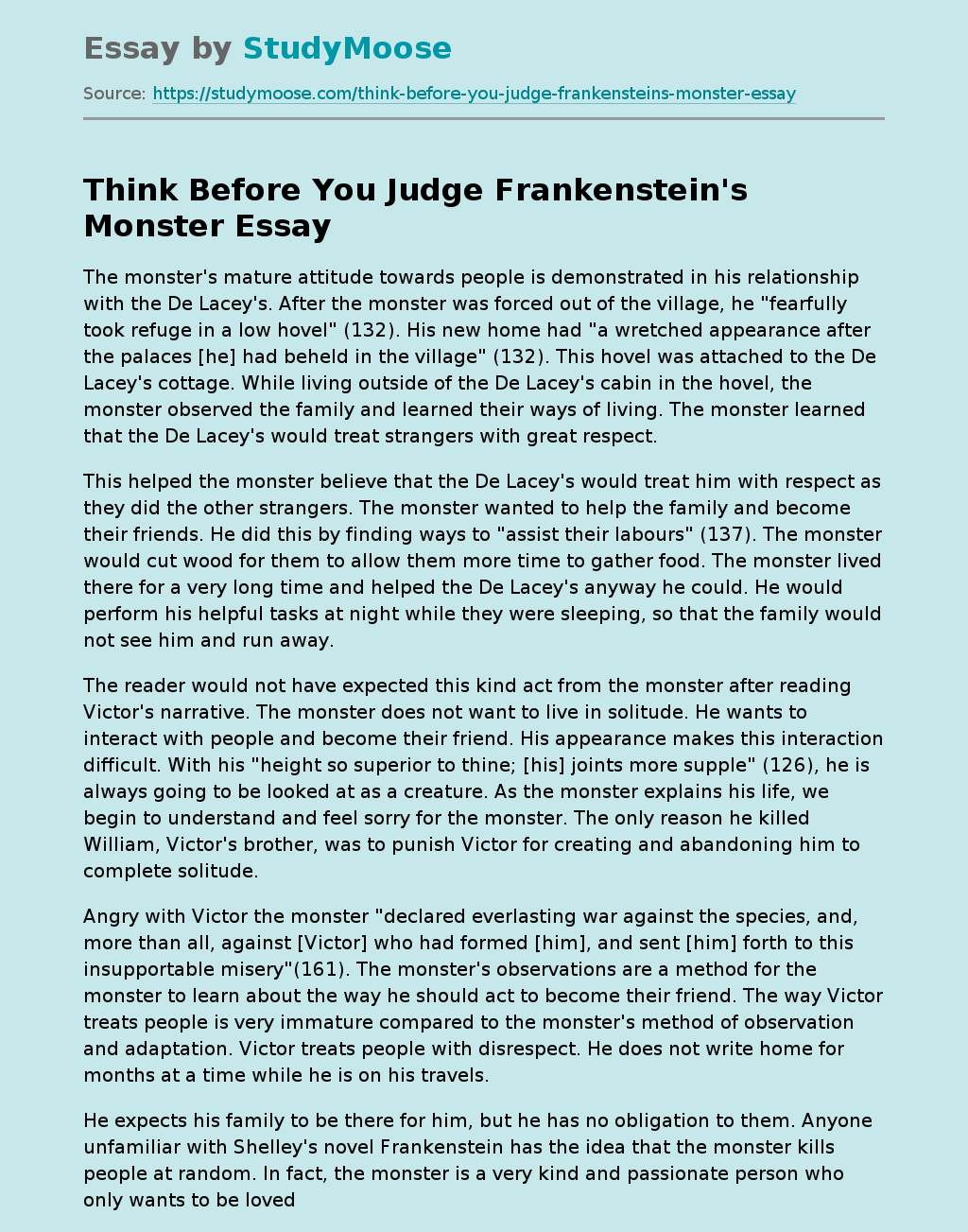