Consumer Behavior Monster Energy Target Market Because the energy drink is still part of a new and developing industry, the energy drink target market is different than in some of the other beverage industries. Monster energy drinks have become a very popular, “hip” part of society, but the market at which they are aimed is not as wide and expansive, or diverse, as some might think. Early in energy drink history, when they were first being sold in the United States, athletes were the primary consumers.

Don't use plagiarized sources.
Get Your Custom Essay on Monster Energy Drink Target Audience and Company Objectives Just from $13,9/Page

This shows that even initially energy drinks were directed at a select crowd, a group of people with specific interests. Although the consumer base for energy drinks has now expanded beyond that of simply athletes, the target market is still more particular than in other industries. When thinking about the energy drink target market, it is important to consider who is most receptive to the purported effects of the beverages. Although everyone is susceptible to the fatigue of the super-charged, over-worked lifestyle, young people are especially vulnerable to persistent exhaustion and insufficient energy.

This group of people, more specifically male teenagers and people in their 20s, are also most likely to believe in the veracity of the energy drinks’ claims. As a result, the majority of energy drinks are developed for and advertised to this younger generation. In addition to focusing on a specific age group, many energy drink companies are even more exclusive in their marketing efforts, gearing their products and advertising to appeal to very specialized groups, such as gamers, extreme sports enthusiasts, and the hip-hop crowd. The effects of this emphasis on such a target market can be seen in the advertising campaigns of the energy drinks.

Many of the names of the beverages, such as Monster LoCarb appeal to these specific consumers and the marketing strategies that revolve around sponsoring public events or celebrity endorsements reflect this focus. The design and packaging of many energy drinks also relates to the target market. Although the energy drink industry currently caters to a very specific target market, as it continues to grow and develop, it is likely that marketing efforts and the focus consumer base will be more diverse and expansive.

Advantages of concentrated marketing include concentration of resources, better meeting the needs of the target audience, and strong positioning. Disadvantages include segments being too small or changing, and large competitors such as red bull to more effectively market to niche. According to Rodney Sacks, CEO, the target audience is 18 – 25 year old males (Murr, 2006). This market is focused on a product which offers an energy boost, so any audience that is involved in sports, or high endurance activity is a clear target.

The green claw marks resemble adrenaline, power, and testosterone, accompanying its motto, “unleash the monster within”. High schools and colleges are clear niches for these high energy markets. The demographics for the target market for Monster energy drink are: Major Cities 18-25 year olds Males Athletes/ High endurance activities Income ? middle class According to the 2000 census, there are approximately 10 million males who fall under Sacks’ audience of 18 – 25 year old males. But I believe the target market is expanding to be much wider than that including women and older men.

Judging by the effectiveness of free handout promotions in hot locations such as South beach, Florida, I see a target market of males and females ages 12 – 35. According to the census this number is around 80 million (US Census Bureau, 2007). Hansen’s Monster Energy drinks offer giant doses of caffeine and sugar in big black cans adorned with neon-colored claw marks. The scary packaging, plus a bevy of extreme-sports sponsorships, positions Monster as an edgy alternative to Red Bull in the fast-growing, $2 billion a year energy-drink market.

Monster’s slogan: Unleash the beast. ” Monster has certainly energized Hansen. The company has seen its sales more than double since it introduced the brand in April, 2002. Last year, Hansen earned $20 million on sales of $180 million, up from just $3 million of profits on sales of $80 million in 2001. Sales nearly doubled, while profits quadrupled, in this year’s first quarter. Those results helped Hansen earn the No. 26 spot on BusinessWeek’s annual ranking of Hot Growth Companies. Monster Objectives Hansen has jolted the Monster brand with a dose of guerrilla marketing.

Teams of Monster ambassadors” give out samples of the product at concerts, beach parties, and other events. The company also sponsors motocross, surfing, and skateboarding competitions. Hansen representatives in black Monster vans supplement the company’s network of 300 independent distributors by assembling store displays and restocking specially designed racks in convenience store coolers. Hansen now owns an 18% share of the energy-drink category, according to the trade publication _Beverage Digest_.

While Red Bull remains the leader with nearly half of the market, Hansen’s energy-drink sales increased 162% last year — more than three times Red Bull’s growth rate. A small subset of consumers is going wild over these drinks,” says Beverage Digest editor and publisher John Sicher. Hansen is really riding a tiger. ” It’s a jungle out there, though. Coca-Cola Co. ([**KO**](.. /javascript:%20void%20showTicker(‘KO’)) ) is promoting its new Full Throttle energy drink.

PepsiCo Inc. ([**PFE**](../javascript:%20void%20showTicker(‘PFE’)) ) is marketing energy drinks under its SoBe and Mountain Dew brands. And independent entrepreneurs have elbowed their way in with products such as Rockstar and FUZE Mega Energy. Every month we pick up a new product or two,” says George Kalil, who runs an independent bottling company in Tucson. Sacks estimates that the energy-drink category is growing 50% a year and that there’s room in the market for everybody. These are the new soft drinks of the world,” he declares. Sacks and Schlosberg are fending off the attack by diversifying.

They’ve launched Joker, an energy drink sold exclusively in Circle K convenience stores, and Rumba, a caffeine-laced juice drink designed to be a morning pick-me-up. And they introduced Monster Assault, which comes in a black-and-gray camouflage can that saysDeclare war on the ordinary! ” It’s a slogan that could describe the juiced-up strategy of this formerly sleepy beverage player. It is apparent that Monster has become a major player in the energy beverage market. We hope to be the number one choice of energy drinks among consumers. 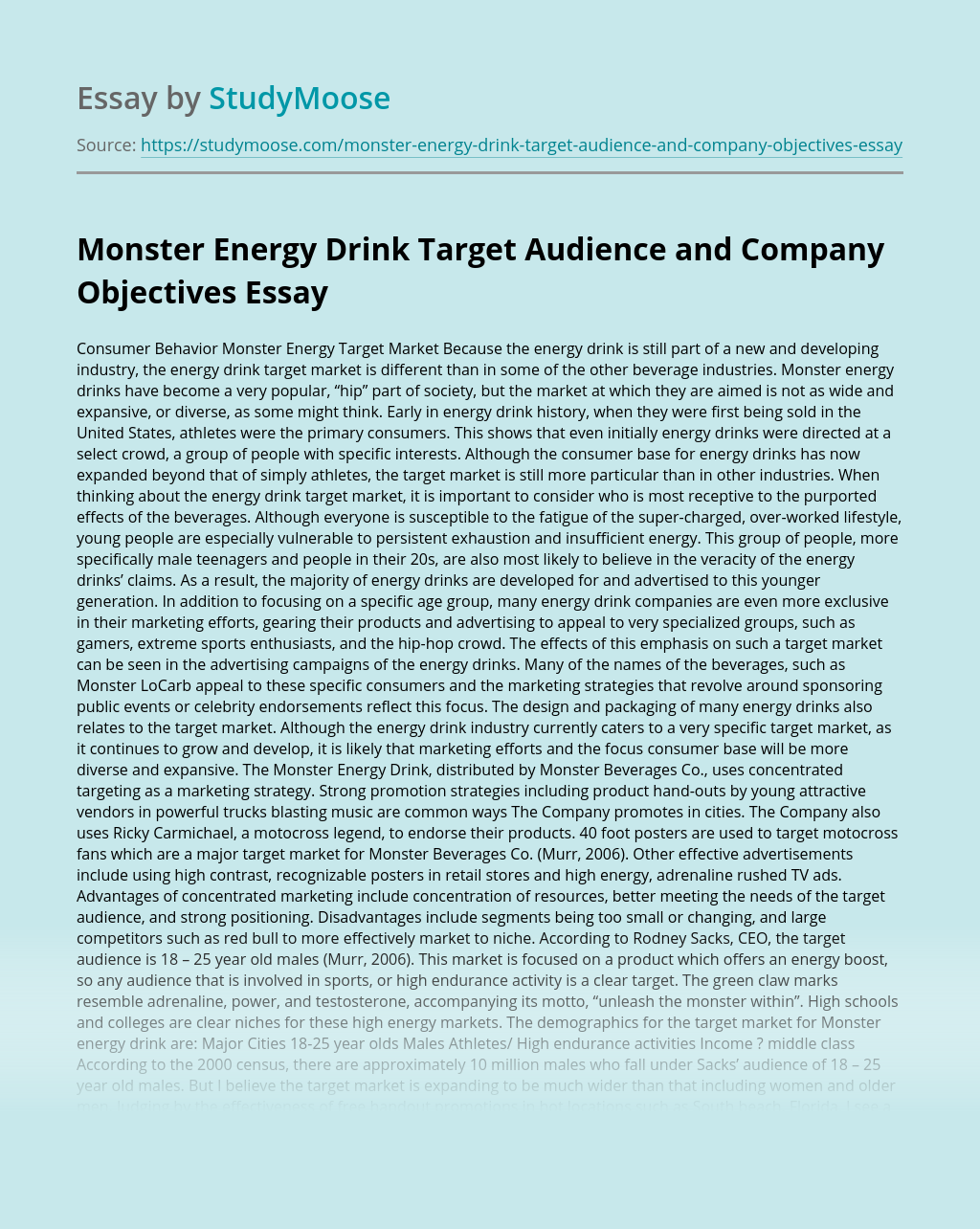 The related topic between the four articles listed below is abortion. There will always be an argument for abortion and against abortions. As a women, I can relate to both sides; pro-choice and pro-life. The fact that the government is trying to take away the choice for an abortions, raises a lot of questions to...

Automobile repair is not only an interesting field to me, also I feel automobile maintenance is necessary knowledge to have in today’s auto market. Like studying for school or learning the skills of a job; I feel knowing how to repair a vehicle will produce a cost effective lifestyle, and take out all the hassle...

Get Essay
Essay on Short Story The Blue Bouquet

Have you even been in a situation when you have gone from total innocence to experience in a short period of time? In the short story “The Blue Bouquet” written by Octavio Paz, the main character starts off by waking up from a nap and going on a walk even after being warned not to...

In ‘‘Hills Like White Elephants,’’ Ernest Hemingway reformulates and reassesses his own experiences in terms of male-female relationships and decisions about childbearing. The story bears clear marks of autobiographical inspiration, and Hemingway chose a rather odd time to write it: his honeymoon with his second wife Pauline. The author would marry four times in total...

Hollow of the Three Hills by Nathaniel Hawthorne

Themes of the Hollow of the three Hills: Main character as a beautiful woman with a shameful and abominable past. -trying to run from it will only make the problem follow. Character as someone who is a plighted subject who had such a secret that she had to be where “no mortal could observe them....