Thickness of a wire

The flow of charge (electrons) through a conductor can be compared to an obstacle course. This correlation is sometimes called the Obstacle Course Model of Resistance. As the electrons shift from one part of the conductor to the other, they have to find their way round past the layers of cations (making up the metallic structure of the conductor), which work as obstacles to the solid flow of electrons. Any Factor that causes there to be additional obstacles or makes it more complicated for the electrons to flow will develop the resistance of the conductor by decreasing the rate of flow of charge.

Don't use plagiarized sources. Get your custom essay on
“ Thickness of a wire ”
Get custom paper
NEW! smart matching with writer

The greater the resistance the more potential difference is needed to push the current through the conductor. The Factors affecting Resistance.

There are four factors that affect resistance:

The Length of the Conductor

The length of a conductor is similar to the length of a hallway. A shorter hallway would allow people to move through at a higher rate than a longer one.

Resistance in wire depends on how thick and how long it is, and what it’s made of. The thickness of wire is called its gauge. The smaller the gauge, the longer the wire.

The Cross sectional area of a Conductor

The cross-sectional area of a conductor (thickness) is similar to the cross section of a hallway. If the hall is very wide, it will allow a high current through it, while a narrow hall would be difficult to get through due to it’s restriction to a high rate of flow. This results in a larger current which leads us to say that the resistance is less in a wire with a larger cross sectional area. The resistivity (type or nature) of the Conductor Different types of metal are used in making wire. You can have copper wire, aluminium wire, even steel wire.

How Current and Voltage are related-Ohm’s Law.

Ohm’s Law states for a conductor at a constant temperature, the current will increase and the voltage will decrease, as long as the resistance stays the same. Current is described as being proportional to voltage. The variable resistor is used to alter the current flowing through the circuit. The ammeter and voltmeter values are recorded ate different positions of the variable resistor. If the ammeter and voltmeter readings are plotted on a gradient, a straight line is produced. The gradient of the graph will give the resistance.

Equation for current is:

The shorter the time the higher the current will be. What is Voltage? When the battery is put into the circuit, chemical energy occurs in the cells and the cells are often referred. The cell pumps electrons around the circuit. This reaches the bulb, which then produces light and heat energy. Voltage (potential difference, p. d) is a measure of how much electrical energy can be transferred per unit of charge. When thinking about charge a larger number of electrons are considered. This larger number of charge is called the coulomb.

The reason is the charge of the electron is extremely small.

W = VQ C = 61018 Each electron has 5J and when they go down the circuit after being pushed out of the cell. When they reach the beginning of the first voltmeter, they still have 3J left. However, when the electrons reach the middle of the two voltmeters they only have 1. 5J left because the first lamp has used the other half of the energy.

When the electrons reach the end of the second voltmeter they do not have a single joule left because the energy has been used by both of the lamps. The electrons carry on without any joules until they reach the battery and then they regain their 3J and the circuit carries on. What is Resistance? The electrical resistance of a circuit component or device is defined as the ratio of the voltage applied to the electric current which flows through it. If the resistance is constant over a considerable range of voltage, then Ohm’s law, I = V/R, can be used to predict the behaviour of the material. 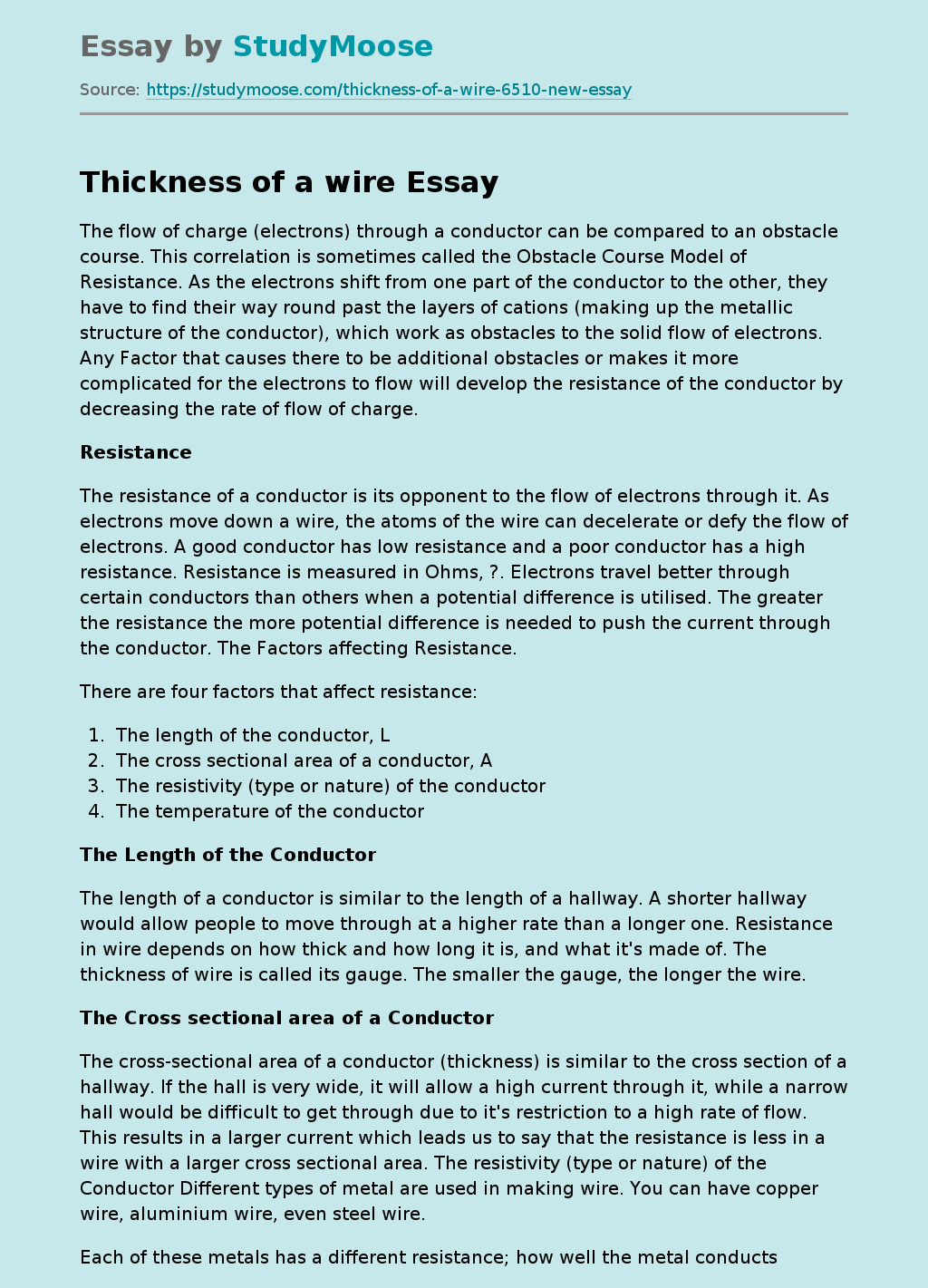