There are many species of majestic sharks that peacefully occupy the oceans across the globe, however for some reason when we hear the word shark’ we immediately think of danger and often death. Nevertheless, we must question whether this perspective is accurate or if it is a result of the overbearing media representations that are guiding the views of millions of people. Thus, misrepresenting sharks and causing them to be one of the most vilified creatures of the ocean.Hello and welcome to the conference on misrepresentation in the media where the misrepresentation of groups and issues in films, adverts and television will be discussed.

Don't use plagiarized sources. Get your custom essay on
“ There are many species of majestic sharks that peacefully occupy the oceans ”
Get custom paper
NEW! smart matching with writer

These views have a significant presence in the 2014 news.com article Shark attack: WA surfer Sean Pollard loses arms in feeding frenzy’. Immediately it invites the reader to view sharks as vicious and bloodthirsty, without them even reading the article. In reference to the vilified creature the article than goes on to use language such as the beast’ and the culprit’. However, this isn’t the only news piece that presents sharks in a negative manner, in fact most texts on this topic tend towards this unfair perspective.

With many often-using maligning adjectives such as mauled, savaged and brutal to describe attacks. On top of this, many pieces regarding shark attacks lack the input from shark experts, which leaves the victims of these unjust media representations without a voice. If we than look back at the 2014 text, the quote “while it was not known for certain if the shark was the culprit, it was destroyed humanely stands out, because it essentially defends the culling of an otherwise innocent shark by stating that it was done humanely’. The defense of this horrid act is due to the values, attitudes and beliefs that were initially enforced by the film Jaws and have remained present in the media to this date. Unfortunately, the portrayal of these redundant perspectives and stereotypes also appear in many other media texts.Too further grasp stereotypes in the media regarding this majestic creature we can look at adverts, which often present them as ruthless killers. One ad that stood out to me portrayed a man desperate for cigarette and out of nowhere a shark jumps out of the water and begins to bite off his arm. However, the likelihood of this ever happening is effectively nonexistent and there is no relationship between sharks and cigarettes. So, what is the purpose of this scenario? Incidentally, similar setups appear to be common in many ads, solely serving the purpose to provoke fear amongst the audience and make them feel obliged to buy the product presented. Regardless the representation of sharks in these ads are unfair, untruthful and they mislead the audience’s perspectives on sharks. Lack of knowledge about sharks is problematic on its own, but the constant demonization of this inocent creature in advertisements further aggravates this outdated and ignorant representation. If we were to look at the facts and the reasons sharks actually attack, we would realise that the media representations are far from the truth. Putting it in perspective, many people are afraid of sharks, but you’re more likely to die in a car accident than you are to die from a shark attack. So, does that mean we should be afraid to drive or even come near cars? According to the conversation.com there were 72 shark attacks in 2014, with only three being fatal. So, clearly the probability of this event occurring is insignificant, given the fact that millions of people use the ocean for recreation every year. As well as this, there are over 500 species of sharks, but only three pose threats to humans. Despite this, when we think about the denigrated animal we think only of big, dangerous and steer clear. This mindset is all as a result of the lack of accurate media representations, and it is because of this, that innocent sharks are being killed on a constant basis. The years of misrepresentation in the media is a major issue and this poisonous pattern needs to be ended, if the unfair stereotypes surrounding sharks are to ever dissipate. An important part of ending this process is by re-educating the public and permanently altering incorrect, but popular values, attitudes and beliefs. Thankfully this process has already been started by scientists and conservationists and alternate perspectives have begun to appear in many ads and articles regarding sharks. This is evident in the comedic AfriOceans Conservation Alliance advert, in which the likelihood of shark attacks is put in perspective by comparing the number of deaths by shark attacks to the number of accidents with chairs that led to fatalities. Consequently, allowing for sharks to be illustrated in a more reasonable manner. Many articles these days are also aiding in destroying the outdated values, attitudes and beliefs regarding the majestic creature, by providing facts about shark attacks and the reasons they actually occur. Despite these organisations’ best efforts, unless we, take this information on board and fight against the stereotypical depictions in the media, the cruel cycle will never end.In conclusion, the misrepresentation of the bloodthirsty shark’ in the media needs to be reconsidered and eliminated. Conservationists and environmentalist have already commenced this process through putting the possibility of shark attacks into perspective. However, if we are to ever abolish the ignorant media representations, then us as the public must turn away from the decade old perspectives constantly reinforced by media and introduce fresh, new and accurate stances. Remember, media misrepresentation is not victimless and the consequences of it can be seen daily.

There are many species of majestic sharks that peacefully occupy the oceans. (2019, Aug 20). Retrieved from https://studymoose.com/there-are-many-species-of-majestic-sharks-that-peacefully-occupy-the-oceans-essay 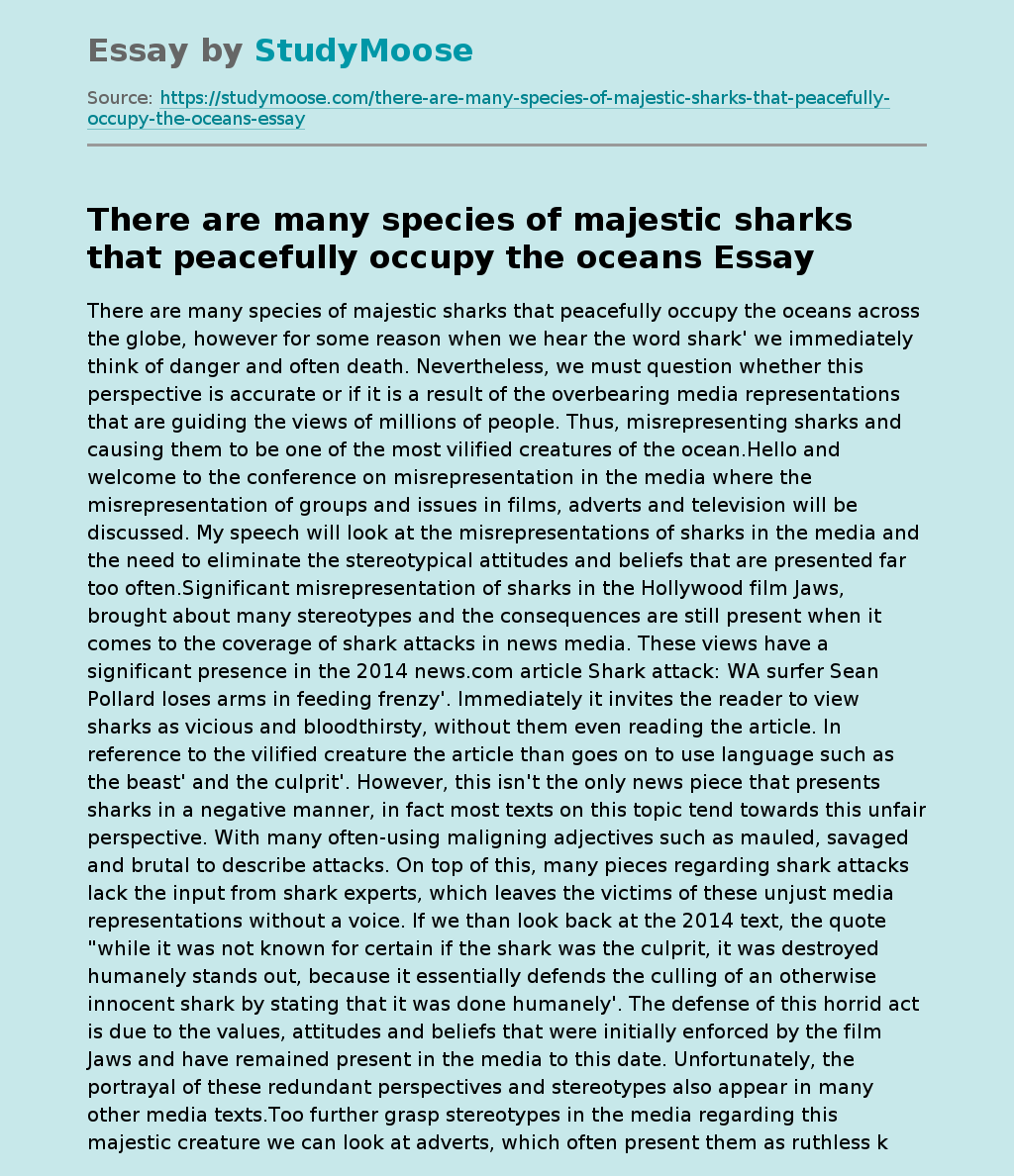