A critical review of the novel “Peacefully Ever After”, focusing on the achievement of peace as the chief accomplishment of the protagonist

Peacefully Ever After Accomplish: to succeed in completing; fulfill, perform, or carry out (an undertaking, plan, promise, etc.) Throughout Janie’s life she accomplished many things, but what I’d like to focus on is what I believe her chief accomplishment was: Peace. Janie achieved peace through a long and trial-filled life which consisted of three husbands who were of varying personalities.

Don't use plagiarized sources. Get your custom essay on
“ “Peacefully Ever After” ”
Get custom paper
NEW! smart matching with writer

In this essay I will discuss Janie’s life relating to each of these husbands, and how Janie grew to achieve peace in the long run. Janie’s grandmother was one of the most important influences in her life, raising her from an infant and passing on her dreams to Janie. Janie’s mother ran away from home soon after Janie was born. With her father also gone, the task of raising Janie fell to her grandmother, Nanny.

Nanny tells Janie, “Fact uh de matter, Ah loves yuh a whole heap more’n Ah do yo’ mama, de one Ah did birth” (p.31). Nanny’s dream is for Janie to attain a position of security in society, “high ground” as she puts it. As the person who raised her, Nanny feels that it is both her right and obligation to impose her dreams and her ideas of what is important in life on Janie. The conflict between Janie’s sacred view of marriage and Nanny’s wish for her to marry for stability and position is a good illustration of just how deep the respect and trust runs.

Janie has a very romantic notion of what marriage should be. “She saw a dust-bearing bee sink into the sanctum of a bloom; the thousand sister-calyxes arch to meet the love embrace . . . so this was a marriage,” is how the narrator describes it (p.24).

Nanny’s idea of a good husband is someone who has some standing in the community, someone who will get Janie to that “higher ground.” Nanny wants Janie to marry Logan Killicks, but according to Janie “he look like some ole skull-head in de grave yard” (p.28). Even more important to Janie, though, was the fact that “the vision of Logan Killicks was desecrating the pear tree” (p.28). Nanny tells Janie “So you don’t want to marry off decent like . . . you wants to make me suck the same sorrow yo’ mama did, eh? Mah ole head ain’t gray enough. My back ain’t bowed enough to suit you!” (p.28).

After the fight over Logan Killicks, Nanny again, tries to explain to Janie why she needs to marry up the social ladder. This conversation reveals a good deal about the reality of being a black woman. She says “De nigger woman is de mule uh de world so fur as Ah can see” (p.29). Janie, out of respect for her grandmother, went off to start her role as a wife. For the most part, Janie’s experiences as a wife are typical of what many women go through, at least in terms of the roles into which they are cast. In contrast to the role of the mother, which is one of giving and nurturing, the role of wife is characterized by giving up one’s self in the marriage. Janie, although she tries, cannot make herself love Logan Killicks. “She knew now that marriage did not make love. Janie’s first dream was dead, so she became a woman” (p.44).

This point is important because it, more than even the marriage ceremony, marks Janie’s transition from Nanny’s child to a woman, not only in the biological and social sense, but also in the sense that Nanny is talking about when she says that the black woman is the “mule of de world . . .” (p.29). It is not long before the newness of marriage wears off for Logan and he introduces Janie to the physical bondage that is expected of a wife. Logan tells Janie “I aims to run two plows, and dis man Ah’m talkin ’bout is got a mule all gentled up so even uh woman kin handle ‘im” (p.46). There is little doubt why Logan would need a mule so gentle even a woman could handle it. As Logan realizes more and more that Janie is not happy with him, he tries to force her into the traditional wife role by having her do more and more of the demeaning work around the farm. The last straw is when he asks her to get a shovel and move a pile of manure. “A feeling of newness and change came over her. Janie hurried out the door and turned south” the narrator says. Janie leaves Logan behind for a young man, Joe Starks, who she thinks is her answer to the pear tree of peace.

In some ways her marriage with Joe Starks is more of a hardship on Janie than her marriage to Logan. Although she stays married to Joe until he dies, she soon begins to understand that she has exchanged the physical and emotional bondage of her marriage to Logan for intellectual and social bondage by Joe. The scene where Joe Starks is elected mayor illustrates this point, as the crowd wants to hear from “Mrs. Mayor Starks” (she no longer has her own identity). “Mah wife don’t know nothin ’bout no speech-makin’. Ah never married her for nuthin’ lak dat. She’s uh woman and her place is in de home ” (p.69). It soon becomes apparent that Joe, is only interested in having a wife to use as a showpiece. Janie wants to feel a part of the community, but Joe keeps her isolated so that she will continue to be his “prize” and not become just another woman in the town. “Janie loved the conversation and sometimes she thought up good stories . . . but Joe had forbidden her to indulge . . . ‘You’se Mrs. Mayor Starks, Janie . . .'” (p.85).

Janie tries her best to fulfil her role as Joe’s wife, but the relationship between them deteriorates. The fight scene in the store is the breaking point in their relationship. Joe start to make comments about Janie’s age and looks. He yells at her for not cutting a plug of tobacco straight, saying “don’t stand dere rollin’ yo’ pop eyes at me wid yo’ rump hangin’ nearly to yo’ knees” (p.121). Janie pays him back however, saying “talkin’ ’bout me lookin’ old! When you pull down yo’ britches, you look like the changeuh life” (p.123). As far as Jody is concerned, Janie has broken her role; she has humiliated him in front of his peers when it was supposed to be her place to make him look good. “You wasn’t satisfied wid me de way Ah was . . . Mah own mind had tuh be squeezed and crowded out to make room for yours in me” is the way Janie explains it to Joe as he is dying of liver disease (p.133).

After Joe dies, Janie meets and falls in love with a younger man, Tea Cake. The character of Tea Cake is important in looking at women’s roles because he shows that it is traditional male attitudes toward women that keep them in their submissive roles. Janie and Tea Cake leave town to get away from the image the people still have of Janie as “Mrs. Mayor Starks.” This means a new identity for Janie, but this time she is able to build her own identity and what she gave up for Tea Cake she gives up willingly, because she loves him. Janie is able to have this kind of relationship with Tea Cake because he was carefree. He was not caught up in the social or political roles than most men strive for; he just wanted to have fun and support Janie. The difference in this relationship is illustrated by the fact that Tea Cake asks Janie to come work with him in the fields. Tea Cake was the only husband that showed real love and respect for Janie throughout their marriage, and through this she found more happiness, contentment, and peace than with anyone else. One could ask the question, “How could Janie live happily ever after when she’s a single widow with three dead husbands?” My response would be that I believe Janie didn’t live “happily ever after,” but rather “peacefully ever after.” Janie discovered who she is through Logan, her needs and desires through Jody, and personal satisfaction combined with happiness with Tea Cake. With this combination, Janie achieved a restful sense of accomplishment in which she could live her life “peacefully ever after.”

"Peacefully Ever After". (2020, Jun 02). Retrieved from https://studymoose.com/peacefully-ever-after-new-essay 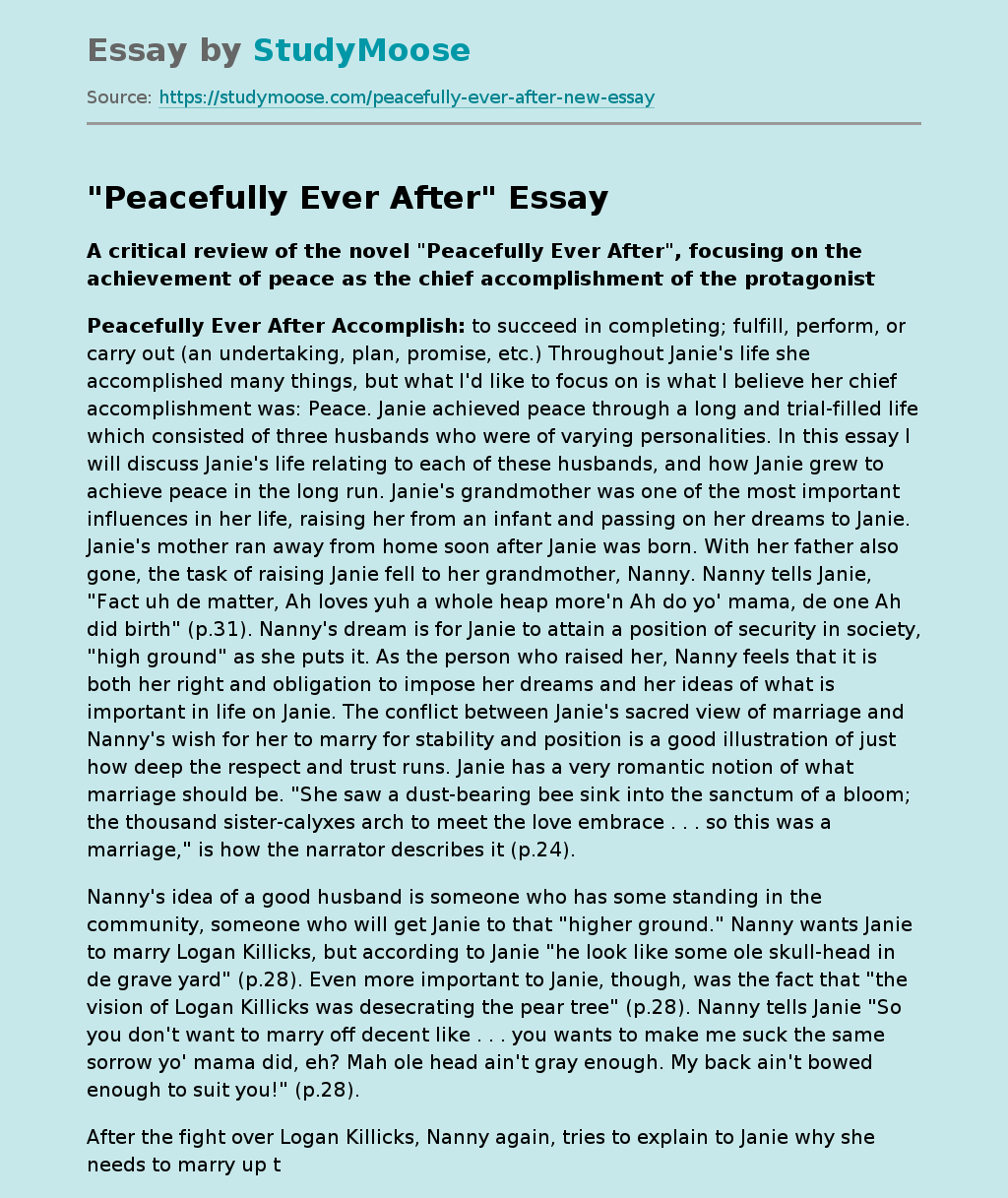