Theodore Roosevelt began his presidency in 1901, and by the time he left in 1908, he had imprinted a significant mark in American history. Theodore, also known as Teddy and T.R., helped nurture a still young country into the magnificent nation it has become today. An incredible amount of work had to be completed before this transformation of a nation could be accomplished. T.R. devoted every minute of his presidency to prepare America for the turn of the century. America was indefinitely shocked by the changes the 20th century brought with it, but Teddy’s efforts helped reduce the effect of the shock.

The major three contributions of Theodore Roosevelt’s presidency are, in order of importance, his involvement in increasing the authority of the presidency in domestic affairs, his efforts in conserving the environment, and most important of all, his preparation of America’s rise to become a world power.

T. R. made many contributions to the domestic area in America.

His efforts paved the way for major changes including Women’s rights and African American’s rights. He helped prepare the country for Martin Luther King to lead the blacks out of their persecution. Roosevelt’s contributions made America finally achieve its dream of equality of all persons. Also he contributed in the industrial area facing monopolies and worker strikes. An example, was when the miners set out a strike and caused a decreased amount of much needed coal. Roosevelt provided immediate action threatening to work the mines using the Army if the owners of the company did not negotiate with the miner’s union.

Also Roosevelt renewed the Sherman Antitrust Act of 1890 and brought over thirty corporations into the Supreme Court. T.R. realized that if this nation would have to have its domestic problems solved before it could progress in other areas.

Conservation is Theodore Roosevelt’s second great contribution. Although some historians consider this to be his most important achievement, it falls short in his preparation of building America’s defense forces up. No matter what anyone says, human lives are far more important that the conservation of forests. However, the conservation of this nation’s forests and environment is incredibly important and Roosevelt foresaw the rise of industrial waste. Immediately T.R. started protecting forests in National Parks. By the time he was done he had increased the protected forests from 43000 acres to 194 million acres.

Also Roosevelt set aside natural wonders, historic sites, and prehistoric structures. He protected and claimed 18 national monuments, more than any president until Bill Clinton. Roosevelt protected the Grand Canyon, naming it the Grand Canyon National Monument. He said this about the canyon, ” Leave it as it is. You cannot improve upon it, not a bit. What you can do is keep it for your children, your children’s children, for all who come after you.” America can thank T.R. for the fact that all these national monuments, forests, and parks exist today.

Preparing America to become a world power and building the nations defense up is no doubt the most important thing Theodore Roosevelt did. Upon entering office the single greatest problem he faced was war. War was now more destructive, consequential, and widespread than it had ever been in generations past. It had become such a problem it was threatening the United States itself. Realizing that there would be destructive wars in the 20th century, and perhaps even foreseeing the World Wars, Roosevelt built up the nations defense. No other president had made such strides to prepare America for war before his presidency or after, until Franklin D. Roosevelt.

His first contribution was to build up the navy. He turned a small size of ships into one second only the to the British Fleet. When Roosevelt left office, and the first World War crept closer, Roosevelt’s incredible fleet of ships was ready. Also T.R. realized that the best policy would be to avoid war whenever possible. As a diplomat he received the Nobel Peace Prize for his assistance in ending the Russo-Japanese War. In 1906, he prevented war again this time it was between Germany and France. T.R. once said, “speak softly but carry a big stick.” His successors have held fast to this idea resulting in victories in the Cold War and World War II.

Roosevelt’s most important contribution as president was preparing America for its place as a world power, although his conservation efforts and domestic efforts were both important also. Roosevelt was truly an amazing president that was able to foresee the issues America would have in the future and prepare America for them. All of his contributions were important and they all helped America be what it is today. 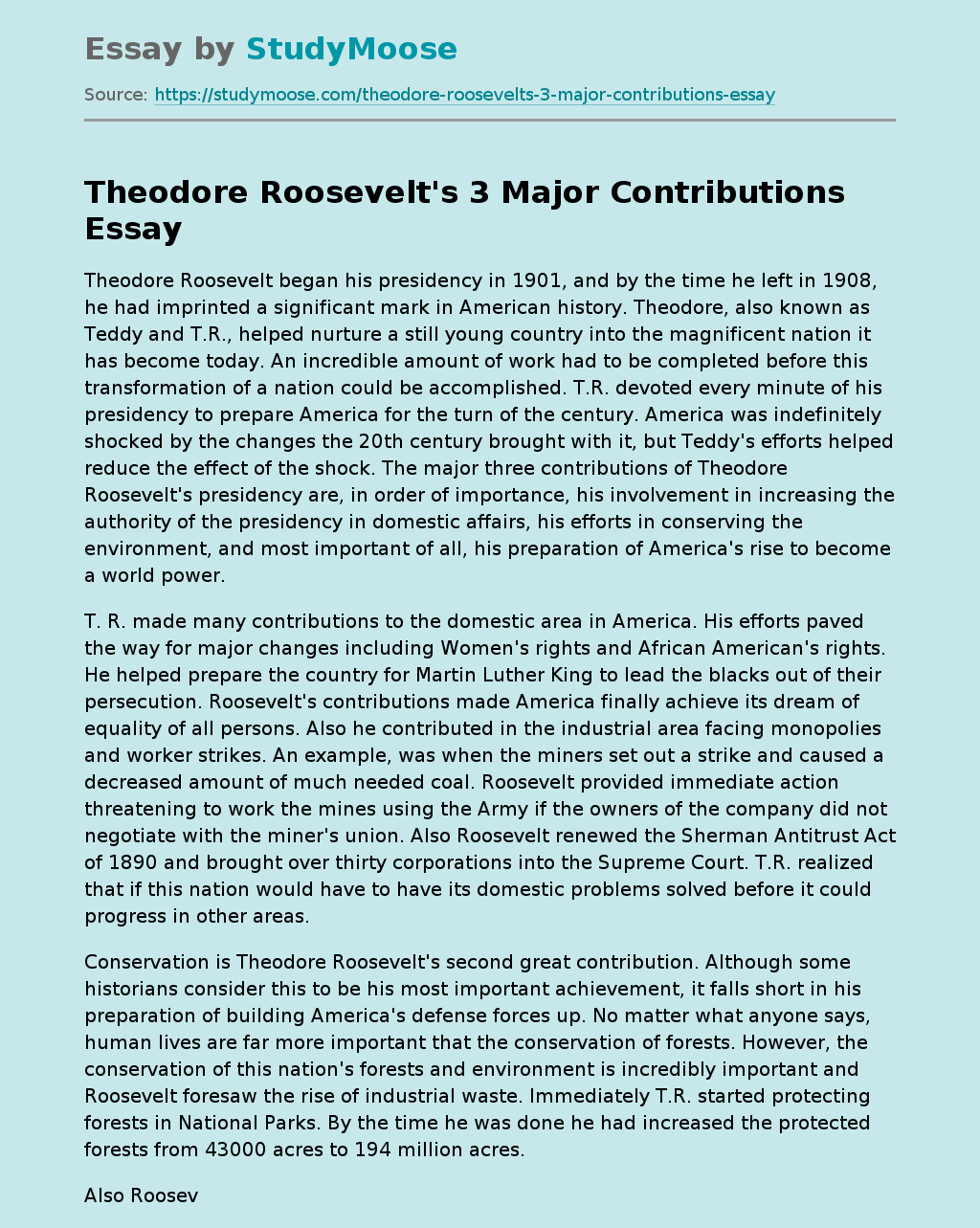