Themes in The Prince and the Pauper

Mark Twain had said that The Prince and the Pauper was a tale for young people of all ages. Primarily, it is a children’s book, and the dominant themes running through the books are of childhood fairy tales: death of a parent, cruel substitute parents, abandonment, lost identity, and injustice. However, the two most major themes represented by the book are that of lost identity and confronting injustice with righteousness and mercy.

Mark Twain starkly contrasts the two worlds from which the two boys come from and hence the tattered brown paper on one side, and shiny glossy wrapper on the other side.

Don't use plagiarized sources. Get your custom essay on
“ Themes in The Prince and the Pauper ”
Get custom paper
NEW! smart matching with writer

The Pauper hales from Offal Court, a crowded slum, and the Prince from a spacious palace. Mark Twain describes two central characters as “Prince of Poverty” and Prince of Limitless Plenty” Tom Canty, the pauper, and Edward Tudor, the prince of England are exact doubles. The most crucial scene of the book is obviously when they encounter each other.

Edward says “O, prithee, say no more, ’tis glorious! If that I could but clothe me in raiment like thine, and strip my feet, and revel in the mud once, just once, with none to rebuke me or forbid, meseemeth I could forgo the crown!” That scene is in the center of the collage. As the book progresses, the reader realizes that Tom Canty is the smarter the one. He is the one who is trying to adapt to the situation. Edward Tudor always refers to his father in times of danger.

He is very pompous.

Both of the boys are described as being mad. But Tom Canty, who is mistaken as the prince is taken great care of just because he is a prince and wears splendid clothes. Edward Tudor, who is in rags, is considered completely mad and no one takes care of except Miles Hendon, but he still believes that Edward is insane. Edward on the other hand believes Hendon’s tragic story. It is very obvious, that in sixteenth century England, clothes determines your identity and status.

The theme of Mercy is evident throughout. It is Tom Canty, acting as the king when Henry VIII dies, starts the reform in England. He revokes the Duke of Norfolk’s death sentence and also grants pardon to a mother and daughter who were consider witches. He also gives a less cruel punishment to a man who was ordered to be boiled to death. Edward continues this reign of mercy and justice when he regains the throne.

Mark Twain is pointing out that children are the hope of the future. After Henry VIII’s bloody reign of religious zeal and prosecution, peace is finally returning. He also points out that sixteenth century England was a time of superficial thinking where one’s status and clothes determined the way one was treated. Tom was treated well, in spite of him being “insane” because he was thought to be the prince. Edward was treated harshly because he was considered a pauper and was poor. Toward the conclusion, one hopes that through all the experiences Edward had of being a Pauper, he will rule England with justice and mercy.

Themes in The Prince and the Pauper. (2016, Jul 17). Retrieved from https://studymoose.com/themes-in-the-prince-and-the-pauper-essay 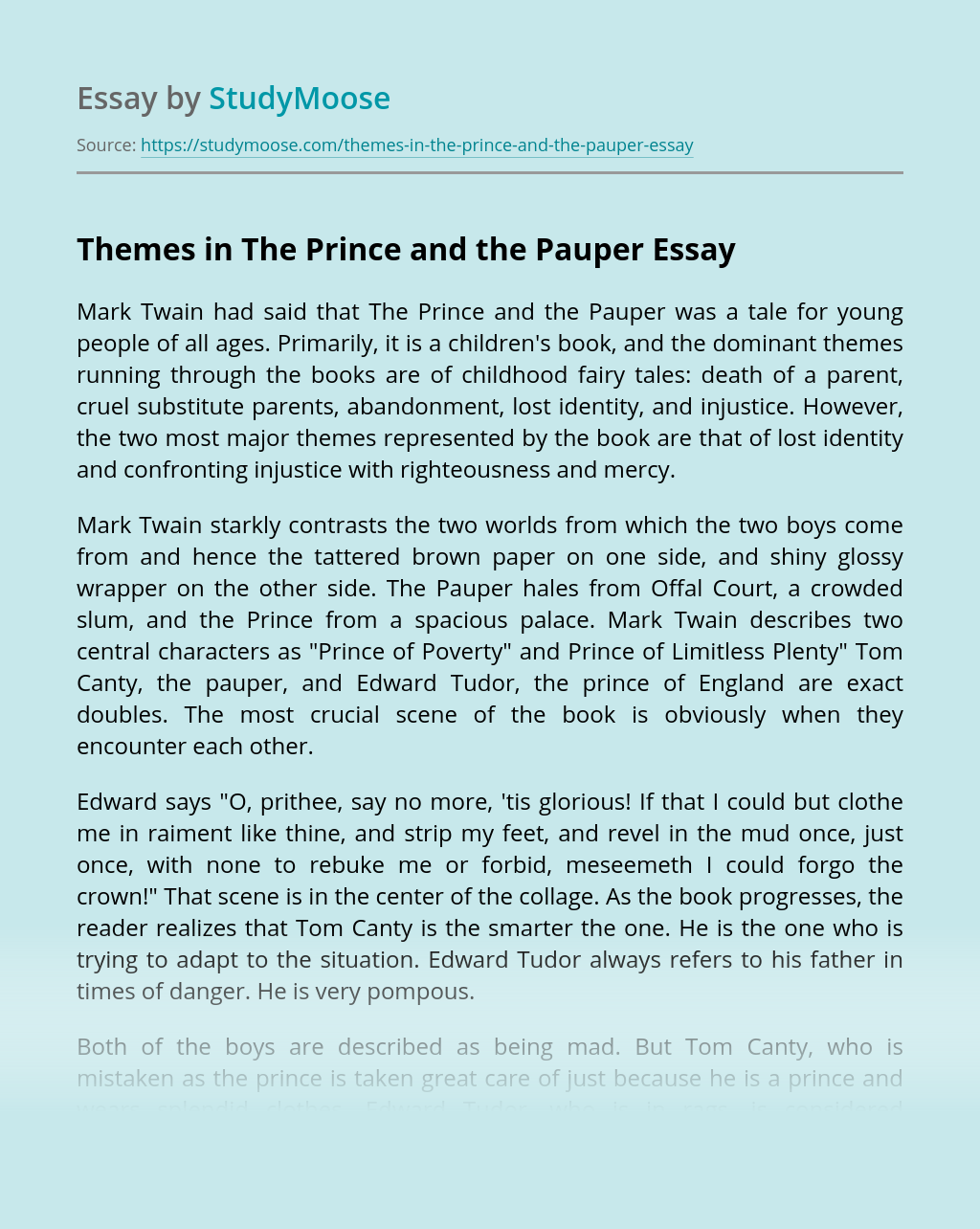