Theme of isolation in the Chrysalids

In the science fiction novel The Chrysalids, written by John Wyndham, the theme of isolation is displayed through the social, psychological, and geographical aspects of the book. Xenophobia is also a key factor contributing to the isolation between the different groups within the population.

Social isolation is made clear with the separation between the “Norm” people and the mutants. The Norm shun those who possess mutant like qualities or abilities, and choose to isolate them in the community. The social circles are so divided that there is severe intolerance for those who are different.

Don't use plagiarized sources. Get your custom essay on
“ Theme of isolation in the Chrysalids ”
Get custom paper
NEW! smart matching with writer

The average Waknukian mind has an incredibly strict view of what they believe is the true image of God. Their views are heavily influenced by their interpretation of the bible, creating psychological isolation separating the Norms from the mutants. This ideology that has been drilled into the Waknukians and threaded deeply into their culture has resulted in a society filled with hatred.

Having land set aside for those who are mutant is a severe form of geographical isolation because they are physically separating people who are different from each other.

Creating a geographical barrier works against society’s natural urge to change, giving the Waknukians a powerful tool for perpetuating the status quo.

The majority of the characters exhibit Xenophobia, an intense or irrational dislike or fear of strangers or foreigners. For example, when David first encountered the fringes people, he had prejudiced fears towards them, expecting them all to have a frightening, disgusting appearance. The fringes people display Xenophobia by having a strong dislike for anyone foreign to their area.

These various forms of isolation have a profound impact on the society depicted in The Chrysalids, affecting almost every aspect of their daily lives and the overall organization of the society. The fear of potentially being the next to suffer from one or more of these types of isolation, either from being identified as a mutant or even being associated with mutants, leads the communities to use isolating tactics proactively as a way to protect their own interests and so the cycle continues indefinitely.

Theme of isolation in the Chrysalids. (2016, Mar 17). Retrieved from https://studymoose.com/theme-of-isolation-in-the-chrysalids-essay 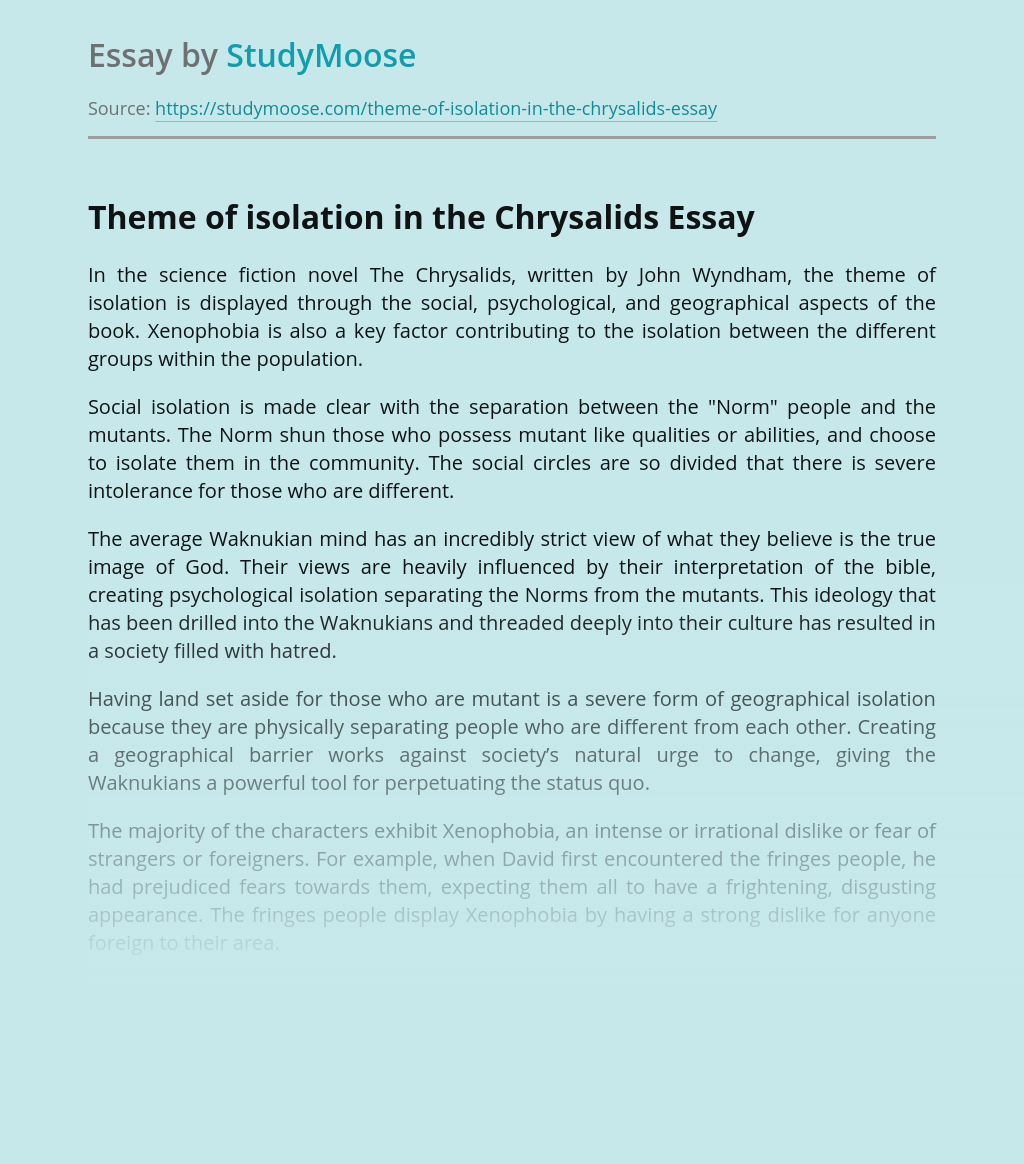