In Richard Wright’s book, “Black Boy,” the main character who also narrates the story is Richard himself since the book is written from his point of view; we find out a lot about how Richard feels and get detailed accounts of how he reacts to the things that happen to him. Even though Richard tries hard to relate to all groups of people around him, he cannot because he is so different, so much more independent and strong willed than the masses around him, these and other forms of isolation help shape Richard Wright’s character throughout the novel.

Don't use plagiarized sources. Get your custom essay on
“ Theme of Isolation in Black Boy Book Review ”
Get custom paper
NEW! smart matching with writer

In Richard’s neighborhood when he lives with his grandma, the thing that separates him most from everyone else is religion. Richard decided he is an atheist at a very young age, which also demonstrates his ability to think independently, even under pressure. He is persistent and stands by his view, because he cannot relate to the one imposed on him.

He says, “Perhaps if I had … remained basically unaffected. (pg 112) Richard believes that religion cannot give him anything more than he already has, so he rejects it as pointless even though everyone around him is trying to persuade him to accept God or else “lose his soul” and countless other threats. But, Richard is strong and doesn’t pay attention to any of these threats, which in a way separates him from his entire neighborhood. This and going to a religious school where all his peers have dry personalities, contributes to his isolation as a child.

And, since he does not believe that God cares about him, this may increase his loneliness even more. So Richard starts to look to other things, such as writing, as a way to create a world for himself in which he does not feel isolated. Another group that he feels very far from is his immediate family. Ever since Richard was little, he has been beaten, threatened, scared and hungry and he mostly associates these feelings with members of his family. Because of the lack of love around him, Richard cannot believe in true love, which is a scar for life.

For example when he meets Bess he says, “I stared at her… then I was sorry that I had said it,” (pg 218. ) When Bess tries to be nice to Richard he is shocked and cannot understand how some people can love so purely and simply. He also comes to realize that he has a very different understanding of the word “love” than Bess because he has never been loved by anyone nor had any real family life. So, his isolation from his family early in life becomes a handicap later when he is unable to accept true love, which isolates him even more from people in his dult life. The last and most important group Richard cannot relate to at all is the white community.

He is so different from the other blacks; willing to question racism, independent, not wanting to be treated like everyone else and with a deep, unique understanding that racism is wrong. He also voices his concerns more than the other blacks, so he has to bear a lot of violence and putdowns throughout his life. He has a conversation about this with Griggs, an old schoolmate: “Do you want to get killed? … don’t anybody act a damn bit like it. (pg 183) and then contemplates this idea: “It was simply … my way with everybody. ” (pg 185) This is the most important isolation in the book because even though it applies to all blacks it applies to Richard even more because he is different from the whites as well as the blacks. This makes him not part of either community; he cannot understand the way black people act like whites are superior and he cannot understand the way white people act like blacks are inferior. Richard is again isolated from everyone around him.

In conclusion, because of the ignorance and intolerance of all the people around him, black and white, Richard can never relate to anyone, which makes him lead a very lonely and detached life. This in turn motivates him to find a better life, whether it would be in the North or in novels/writing. Because of this isolation and narrow-mindedness of people around him, Richard aspires to be someone and to prove to the people who don’t believe in him and his values that he will continue to be an individual no matter what. 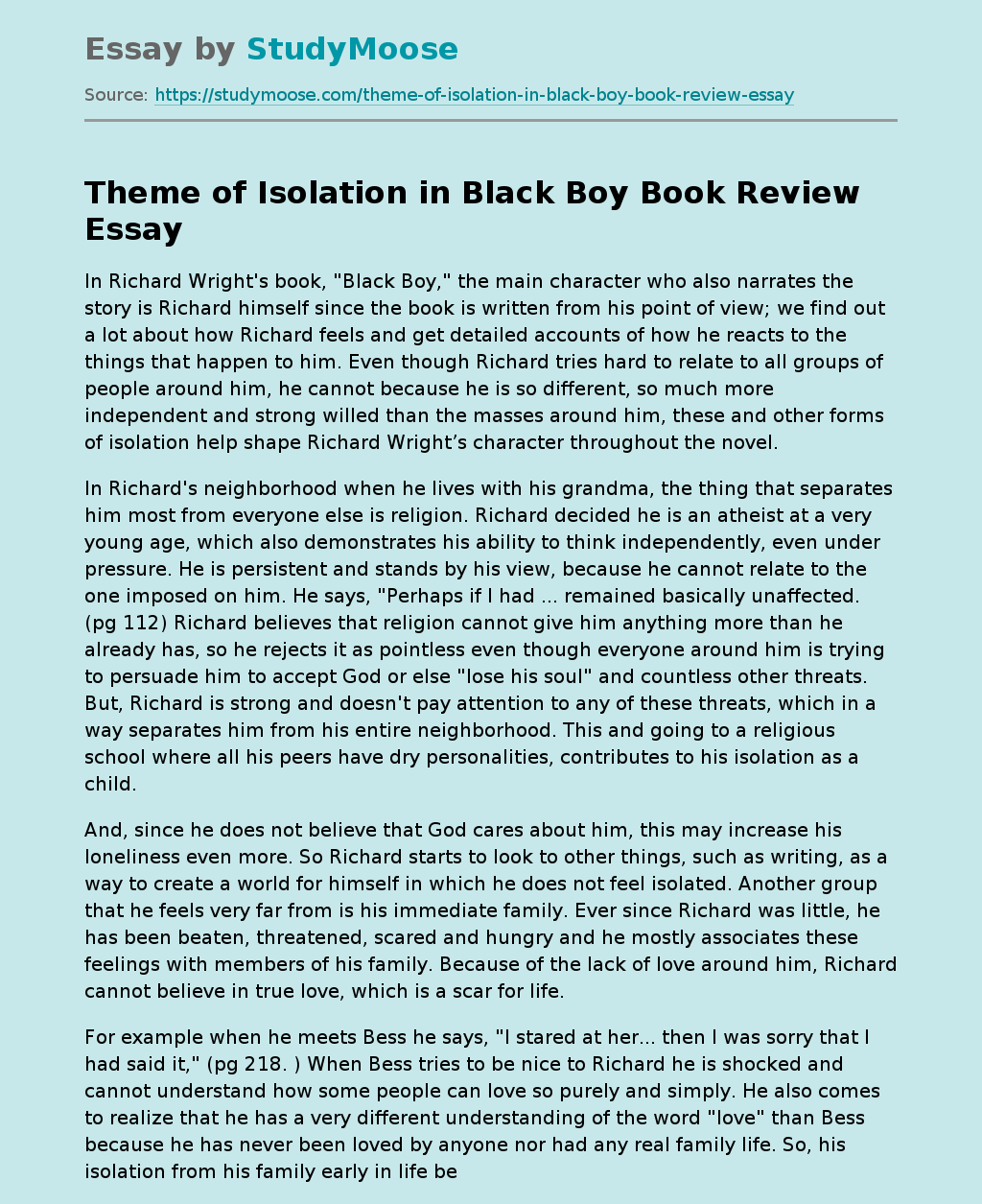