The Chrysalids - Role of Women

In the novel ‘The Chrysalids’ written by John Whyndam, males are the dominant gender. Even though women play a key role in the Waknuk society, they are not treated as equals compared to men. The Chrysalids outlines the development of the Waknuk society and the people within it who are very reluctant to change. In every district, women have an extremely important role in the household and are the life givers and care givers to children. Women also have many responsibilities within their communities.

Don't use plagiarized sources. Get your custom essay on
“ The Chrysalids – Role of Women ”
Get custom paper
NEW! smart matching with writer

However in Waknuk, women are subjected to very strict rules and laws.

Men are entitled to disown their wives after conceiving three deviant infants and have automatic control over them. These principles prevent and limit these women from opportunities, privileges and freedom. The four women who are to be considered are Emily Strom, Harriet, Mrs. Wender and Rosalind’s mother. These women are all mistreated either by the Waknuk laws or men. As all women, Emily Strom is expected to fill a certain criteria of how a typical women in Waknuk should be.

Even more so due to the fact that she is married to the towns leader, Joseph Strom.

Being the mother of three children, Emily Strom automatically abides by the rules and regulations of the Waknuk district. Two of Emily’s children have the power of telepathy, meaning if discovered, they will be classified as blasphemies. Women are expected to be a loyal, devoted and passionate wife and to bear non-deviant children. Emily demonstrates this definition completely.

She is forced to accept her position due to the fact she has always been manipulated by her husband. Joseph Strom aspired to prolong Waknuk’s conventional customs of pleasing God and destroying blasphemies.

Emily is respectful to these regulations with her ‘views harmonising’ Joseph’s own. Her character and personality have been utterly seized by Joseph’s way of life. This is evident when she deprived her own sister of help. Her sister pleaded to swap babies for a couple of days so that her deviant baby could receive a certificate. The infant only had a ‘small’ blemish but would be discarded due to it. Instead of helping, Emily ‘gave an incredulous gasp’ and refused Harriet’s offer. Harriets tragic death allows the idea that Emily is caring due to the fact she discretely wept.

This proves that Joseph indoctrinates Emily and deprives her of freedom. Joseph was disgusted by Harriet’s remark, as society would also be. In Waknuk, women all aspire to resemble Emily Strom. She is perceived as a loyal dedicated and housewife. The expectations of her are at a very high standard as anyone would be horrified if she were to produce a deviant child. Unknowingly, she did. Like Harriet, many wives fear their husbands and society. Harriet’s alarm regarding her baby is partially due to the fear of rejection of the community and from her husband.

Emily’s sister Harriet has conceived three queer infants. She is not very close with the Stroms and had ‘only seem Emily eight or nine times. ‘ Regulating to the Waknuk law, Harriet concluded that ‘Henry will turn me out. ‘ She believes he will ‘find another wife who can ‘give him proper children. ‘ Henry is not regarded to again although it is understood that he is unlike Joseph who had already discarded his first wife for the same reason. Henry stayed with Harriet but is unknown if he would throw her out after the third blasphemy as many men in society would.

Harriet strongly disagrees with Waknuk’s laws referring to deviational children. At the event when Emily deprived Harriet of help due to her babies imperfection, she states; ‘I am not ashamed- I am only beaten. ‘ This is essential because she, of all people is the first person to stand up to Joseph Strom about Waknuk’s way of life. Herself and her child are discarded from Waknuk immediately. Harriet is not accepted by Waknuk as she does not accept Waknuk’s morals. Both Mrs. Wender and Rosalind’s mother are neglected by the Waknuk community in similar ways.

Both their children are considered blasphemies. Sophie’s mother, Mrs. Wender does not approve of Waknuk’s laws but attempts to accept them. Although living in hiding, she wears and carries the ‘conventional cross’ as all true Waknuk women do. Sophie, her only daughter was born with six toes on each foot. If anyone were to find out, she would be considered as not ‘in the image of God. ‘ David Strom, son of Joseph Strom, found out and accepts Sophie for who she is.. As well as Mrs. Wender, David learns ‘to be any kind if deviant is to be hurt- always. ‘

Mrs. Wender unconditionally accepts the fact that she is the mother of a so-called deviant. The Wender household consists of fear, mostly from Mrs. Wender’s perspective. She is the one who is responsible for Sophie’s safety and making sure that she is not ‘found out’ and will do absolutely anything in her power to stop that from happening, as would Rosalind’s mother. David’s cousin, Rosalind is also capable of telepathy. On the night of their escape, Rosalind’s mother prepared her. David was astounded of the fact that her mother actually knew about her telepathy.

He could not imagine his could not imagine his ‘own mother doing such a thing for Petra’s sake’ and made him wonder ‘how many mothers’ were going against Waknuk’s regulations to ‘protect their children. ‘ Once Alan Ervine discovered Sophie’s toes, society as a whole were disgusted by the acts of Mrs. Wender. In result of Alan’s discovery, the Wenders fled Waknuk but were eventually caught. Sophie was cast away to the Fringes, as society would of done to Anne. Out of the small minority of telepaths within the novel, Anne very strongly repulses her capability and is mistreated by her husband and society.

Anne refuses to connect with the telepathic group after simultaneous alarms regarding to the groups discovery. She abandons the group to marry beloved Alan Ervine who is out to reveal the groups telepathic abilities. Anne believes she ‘should not wait’ to marry one of her ‘kind’ and there is an uneven number anyway. As all deviants, if and the group were to be found out by society, they would be cast away to the Fringes, their biggest fear. Anne stubbornly tries to disconnect with the group even when it is described that their ‘minds are one. ‘ She does this in order to protect herself and Alan.

Early into their marriage, Anne reveals her telepathic ability to husband Alan. His reaction was uncalled for but resembled the usual Waknuk citizen, cruel and judgemental. Alan threatened to reveal her power to the town. Anne wanted Alan ‘so badly’ that she was ‘determined not to let anything stop her from having him’ and was utterly heartbroken at his response. David’s uncle, Axel discovered Alan in the woods after David informed him of the situation. That day, Uncle Axel killed Alan to shield the group from danger. Anne has been mistreated by two men. Alan and Uncle Axel who has no right to kill Alan and take away her beloved husband.

Anne hung herself in result of the death of her husband. Anne ‘never wanted to be different from the normals’ in the first place. Emily Strom, Harriet, Sophie, Mrs. Wender and Anne are all women within the Waknuk society who have been mistreated and disregarded by men and society. Accepting the role in which you are given is hard, challenging and near to impossible with many harsh regulations outlining the ways in which you should live. Emily, Joseph Stroms wife is entirely controlled by the demanding expectations and rules of society. Her husband, Waknuk’s leader, also plays a factor in how she acts.

Her sister, Harriet, was deprived of the joy of raising her own child due to societies views about deviant children which lead her to her death. Anne was also lead to her death after an unhappy life of living in hiding and shame. Mrs. Wender and Rosalind’s mother are the two strong women who silently challenge the laws of Waknuk and hide queer children from society. Sophie was discarded away to the Fringes after trying so hard to stay undiscovered. The women of Waknuk have a demanding role to play in the household and in society, many of which and are mistreated by men and feel forced to abide by the unjust Waknuk laws.

The Chrysalids - Role of Women. (2016, Oct 03). Retrieved from https://studymoose.com/the-chrysalids-role-of-women-essay 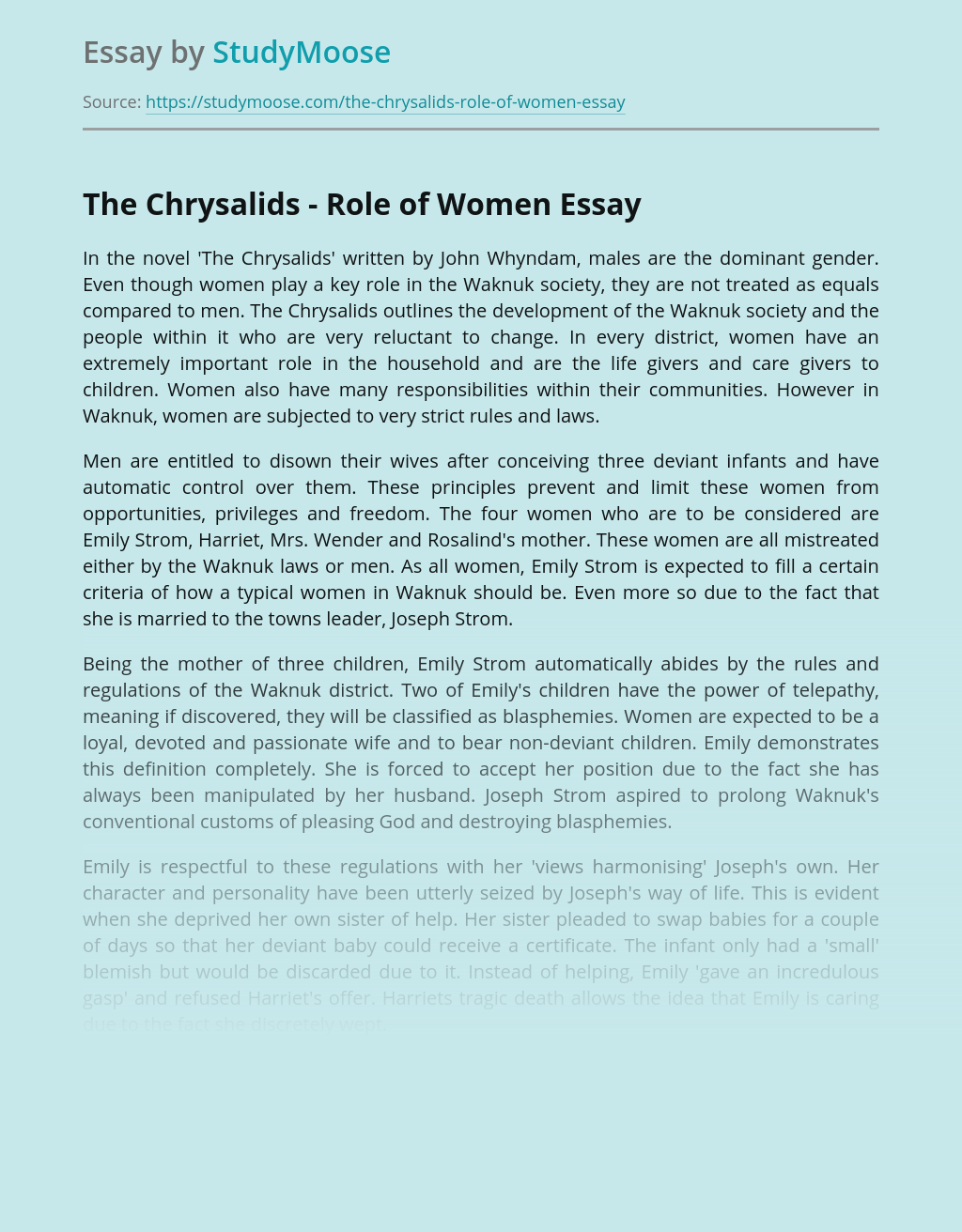