The Weird Ways of Bipolar Disorder in Teens

Over the decades and since the beginning of life on earth, mental disorders have existed and tormented many different people. The one group of people who tend to be getting more mental disorders than others are teenagers. The teenage years are a time for growth, mistakes, and trying to grow up and be responsible so of course developing a mental disorder at this age is pretty common. But what even is a mental disorder?

Today, ‘A mental disorder is a syndrome characterized by clinically significant disturbance in an individual’s cognition, emotion regulation, or behavior that reflects a dysfunction in the psychological, biological, or developmental processes underlying mental functioning” (“The New Definition of a Mental Disorder”, n.

Don't use plagiarized sources. Get your custom essay on
“ The Weird Ways of Bipolar Disorder in Teens ”
Get custom paper
NEW! smart matching with writer

d.). One mental disorder that tends to get diagnosed in teenagers is bipolar disorder, or manic depression. Leahy writes “Bipolar disorder is a chronic and often devastating illness that may go undiagnosed because of its complex and diverse presentation” (Leahy, 2007). There are even different types of bipolar disorder.

Bipolar disorder is a mental illness that comes with many varying symptoms because of all the different emotions and variations of the disorder. According to Mitchell, the more common symptoms of bipolar disorder are: “bodily slowing, increased appetite, increased sleep and need for rest, early morning wakening/diurnal mood variation, hallucinations and delusions, excessive blame, increase of excessive happiness mood or hypomanic symptoms, early onset of first depression, multiple prior depressive episodes or manic episodes, and positive family history of bipolar disorder” (Mitchell, 2013). Yet symptoms will vary from what emotion a person is feeling at a certain time of a day. Manic symptoms. People feeling the manic side of bipolar disorder may experience: being mad, angry, or sensitive, insomnia, increased energy, jittery or restless feelings, feeling more lively than usual, speaking fast, feeling like their thoughts are going through their mind fast, feeling very high and excited, thinking they can multitask and be successful, and doing hazardous things, like bingeing and splurging. (“Bipolar Disorder”, n.d.).

Yet people feeling the depressive side may experience: having problems thinking and making choices, feeling depressed and disheartened, feeling overly worried, having less energy, forgetting things, insomnia, sleeping not on a proper time schedule and erratically, feeling like they cannot enjoy the things they usually love, thinking about death and having suicidal thoughts, overeating or not eating enough, and feeling exhausted or physically and emotionally slowed down (“Bipolar Disorder”, n.d.).

The exact cause of bipolar disorder is still unknown, but it is known that biological differences and genetics have an effect. According to Mayo Clinic, “people with biological differences, have physical changes in their brains, yet the significance of it is uncertain” (“Bipolar Disorder”, 2018). Also, if a person has an immediate family member such as a sibling or parent that has bipolar disorder, then they will most likely have it too, making it genetic (“Bipolar Disorder”, 2018.).

The third type of bipolar disorder is called Cyclothymic Disorder and it is having numerous episodes of both hypomanic episodes and depressive episodes but does not meet the requirements for having just one (“Bipolar Disorder”, n.d.).

Bipolar disorder comes with many effects besides just the symptoms, it effects someone with bipolar disorder through their relationships, work, school, or personal events. Bipolar disorder causes people to act in certain ways that they do not always mean to act. The fluctuating emotions causes relationships to deteriorate because it is difficult for people without mental illness to understand why someone with it acts a certain way or says a certain thing. It is also difficult on parental relationships because parents to get afraid of not knowing what to do or how to help, or they think their child is just overreacting or behaving badly. It causes people to do not as well in school as they could be doing because they tend to get distracted or unable to concentrate because they are too busy trying to deal with their emotions flowing their mind and body. Work is especially hard because it involves teamwork and trying to do something with someone who does not know will end up becoming annoyed or frustrated because of the flying emotions. Treatment Bipolar disorder is mainly treated through three types of medications; mood stabilizers, anti-psychotics, and even some antidepressants. The first medication that is primarily used is Lithium carbonate. Lithium carbonate is “used primarily for long-term (‘prophylactic’) treatment of BD with the aim to prevent further manic and depressive recurrences” (Alda, 2015). According to webMD, other medications are used such as Depakote, Equetro, Lamictal, Neurontin, Trileptal, Topamax, Haloperidol, Abilify, Saphris, Zyprexa, Risperdal, Latuda, Symbyax, Seroquel, and Vraylar (“Understanding Bipolar Disorder – Treatment”, n.d.).

There is also treatment through psychotherapy, and even a mix of therapy and medication. The different kinds of psychotherapies that are used are cognitive behavioral, interpersonal/ social rhythm, family therapy, and group therapy.

Interpersonal therapy is therapy that focuses on things that happen in someone’s life such as life stage transitions, personal shortcomings, relational conflicts, and griefs, it also tries to find underlying causes (“GoodTherapy.org”, n.d.).

According to Good Therapy, “Group therapy is a form of psychotherapy in which a group of patients meet to describe and discuss their problems together under the supervision of a therapist” (“GoodTherapy.org”, n.d.). Family therapy is group therapy for families. It involves digging into the family’s problems and trying to get over them positively. It is best if a medication is used while going through a therapy so that treatment will be more effective. For those who taking the medication does not work, electroconvulsive therapy could be used, but generally it is not used, and surgeries are not used (Colin, 2013). Other simple things like adequate sleeping, exercising, and eating properly is helpful in improving bipolar disorder.

Overall, bipolar disorder is a very difficult mental disorder to deal with. It has multiple symptoms that create a rollercoaster of emotions, and it has different variations and episodes that frequently switch and have their own symptoms. It has effects that someone with bipolar disorder cannot control, such as how they feel and how frequent the emotion changes. These effects tend to ruin relationships and makes it complicated to do work and to focus. It has very specific ways of being diagnosed such as having to meet certain requirements and symptoms. It is also important when being diagnosed that it is correctly diagnosed. It has treatments that are helpful and beneficial and does not require major medical changes like the different kinds of medications, mood stabilizers, anti-psychotics, and anti-depressants; and therapies including cognitive behavioral, interpersonal, group and family therapy. Bipolar disorder is a wild ride to be on, living with it is very complex and far from easy. Without medication and support, bipolar disorder is hard to manage and destroys any form of relationship. Bipolar disorder is a disorder that should be taken very seriously, and not seen as making someone a bad and crazy person.

The Weird Ways of Bipolar Disorder in Teens. (2021, Mar 09). Retrieved from https://studymoose.com/the-weird-ways-of-bipolar-disorder-in-teens-essay 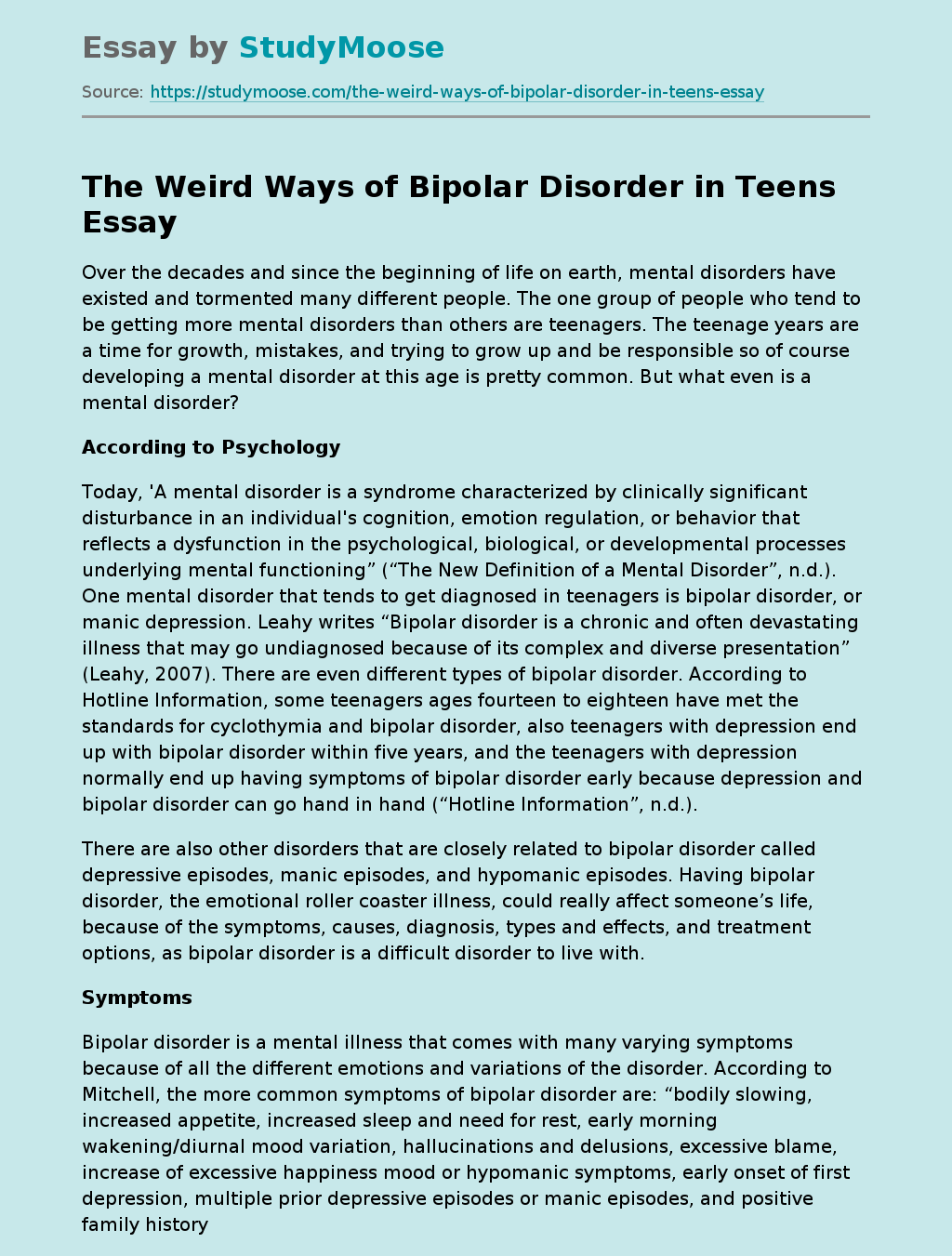