One of the most striking resemblances of people to animals is their impulse to run away from danger. After the most cataclysmic part of the novel, Robert began to think that there “should have been birds” (Sparknotes) before it happened. “The birds, being gone, had taken some mysterious presence with them. There was an awful sense of void – as if the world had emptied.” It can be deduced that this kind of reaction by the birds is in every way similar as to how men react to danger, which is, to put their selves as far away from the situation as possible.

Don't use plagiarized sources. Get your custom essay on
“ The Wars by Timothy Findley ”
Get custom paper
NEW! smart matching with writer

Let us give a scenario; perhaps a man was walking around the corner of a park and then sees hundreds of people running in the opposite direction. T

his instantly gives him a notion that something is wrong, that something dangerous is occurring. This impulse is exactly the same with the birds that were thought about by the main character in the novel.

Another imagery depicted in the novel is Rowena’s parallelism with rabbits. In the novel, Rowena is the mentally retarded sister of Robert. She is very much loved by her brother. Like the rabbits, which were depicted as innocent, Rowena herself is innocent from the cruelties and tragedies of life. “Robert looked. There was a whole row of cages. Rowena.” (p.87) It may be presumed that the author’s choice of rabbits as pets for Rowena was due to the fact that she was so much like them.

As rabbits, they were not aware that their death would be caused by the death of their master. Mrs. Ross ordered Robert to kill them after Rowena’s death. Like Rowena, they died innocently. It is safe to say that the retardation of Rowena is in parallel with the obliviousness of the rabbits to the atrocities of the world. Another representation of the similarity between a man and an animal is shown in the coyote. The coyote, as depicted in the novel, is like a man who is reasonable when not in need. “Robert learns from this run that a hunter kills when it has to survive, but is generous when it is not a hunter.”

Another excerpt of the novel tells how the coyote “didn’t even come down off its toes. And when it came to the place where the gophers had been sitting, neither did it pause to scuffle the burrows or even sniff them.” (p.26) Through these statements, it is conceivable that we are like the coyote. We, as men, are inevitably aggressive to others once our interests have been breeched. But as long as our needs and wants are satisfied, we do not lift a finger to use others in our effort to content ourselves. This is just the same with the coyote. The coyote, being content at the given time, reacted indifferently to the gophers which it could have eaten down easily if it was hungry.

Another of the imagery shown in the novel was when, in page 90, the bird, the toad, and the hedgehog, although very different from each other helped each other. This is very typical of us as humans. It is common knowledge for us that in able to survive in this world, we must help each other. Again, let us create a scenario. Perhaps a priest, a policeman, and a criminal were trapped in a room that has started to get filled with water. Then the priest said that they should help each other if they were to get out alive.

Does the priest chastise the criminal for his acts? Does the policeman bind the criminal because he does not trust him? Or does the criminal kill both of them? No. I am possible that they will disregard their disdain for each other and unite instead, just like the animals. In addition to this, a questionable ethics of our society is shown in the novel. It happened when Robert had to kill the injured horse in the ship to Europe.

The act was uncannily similar to modern day euthanasia, which is the painless killing done to comatose or severely suffering patients in hospitals. Going back to the coyote, the anima, after getting his fill at the pond, goes away so that Robert can drink too. Also, the coyote wagged its tail upon seeing him again. Being a savage animal that it was, the coyote showed that it has a gentle side too; as long as one is being friendly to it. This is in parallel to man’s behavior; as long as a man is not aggravated or provoked, he will do nothing to harm anyone. Of course, harming others is a deviation from normal and acceptable behavior.

In addition to the given examples, another example is the way Robert hesitated in killing the rat. This shows that men and mice are alike. “Robert wondered afterwards if setting the rat free had been a favor – but in the moment that he did it he was thinking: here is someone still alive. And the word alive was amazing.” This part of the novel shows that men are like rats if perceived in the concept of life.

A man, being the most superior of inhabitants of this world is no different from a rat which is always thought of as the scum of everyday living. It is amazing to think that what bonds man and rat in the same situation are their continuous actions for survival. Possibly one of the most important depictions in the novel is Robert’s encounters with dogs and horses. It is a common belief that the dog and the horse is what represents Robert the best. Robert was entirely a sensitive man. Yes, he fought in wars, and yes, he was brave enough to face his fears; but Robert had this state of emotions in his life. Like the horses, he had this longing for freedom from his miserable life.

And it may be assumed that Robert’s frequent saving of the horses from misery was a symbolism of his own longing. But the last thing I want to include in this paper is Timothy Findley’s greatest depiction of man and animals. It has been shown through the novel that man has a thirst for destruction.

Unlike animals, which only prey upon the weak to survive, man has a penchant for death and annihilation. Needless savagery of men is what sets us apart from animals. And this dreadful quality of ours maybe the one thing that may demonstrate that in spite of all our knowledge, we may be the ones that should be considered savage. Let us think about it, a lion does not kill another lion unless it is of the utmost necessity; but we kill each other of the most trivial and pointless things.

The Wars by Timothy Findley. (2017, Mar 18). Retrieved from https://studymoose.com/the-wars-by-timothy-findley-essay 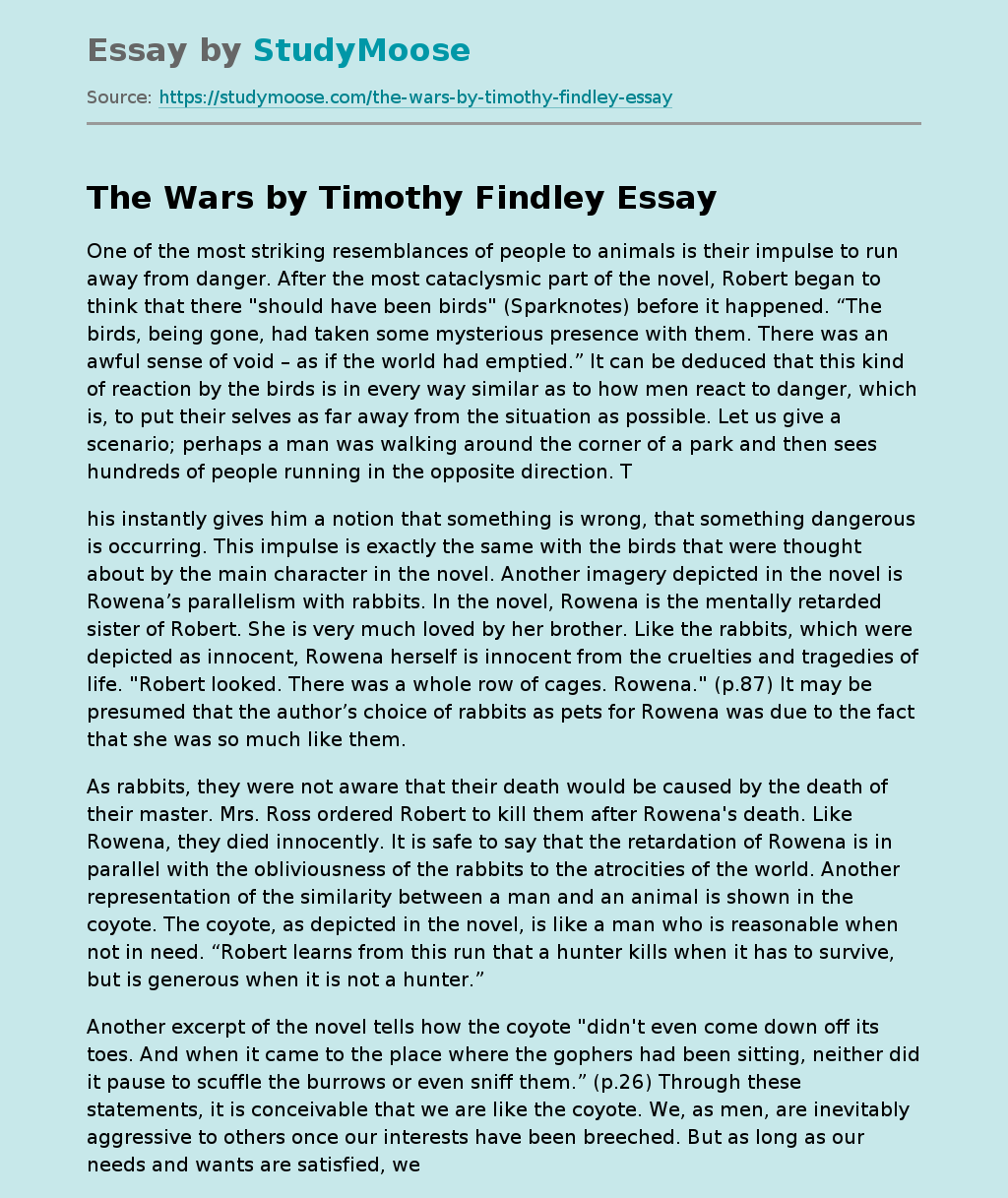