Pilgrim is introduced in the story in a strikingly interesting manner – a suicide attempt resulting to his death – a “temporary death” which only lasted for a few hours. From the beginning of the story which was supposed to be the end of the central character’s life, the character of Pilgrim presented a big mystery. Having failed to commit suicide, Pilgrim was though to be schizophrenic so he was placed in a clinic where he tells his astonishing story of how his life – or rather “lives” – spanned 4,000 years.

Don't use plagiarized sources. Get your custom essay on
“ Pilgrim by Timothy Findley ”
Get custom paper
NEW! smart matching with writer

The introduction of Pilgrim set the whole plot of the story.

It introduced many mysterious questions that were seemingly illogical and irrational – Is Pilgrim really a madman or an immortal? Which side should the reader take – one who supports theories on psychological disorders or one that accepts the possible mysteries of life? Having lived “multiple lives”, why did Pilgrim want death? Such questions only show that Pilgrim was a very complex character – one that symbolized a wide selection of societal themes.

Pilgrim, A challenge In the story, the character and nature of Pilgrim satisfied the intellectual and psychological challenge that Dr. Jung was looking for.

The peculiar life of the supposed schizophrenic provokes many philosophical, spiritual, psychological, and scientific questions and these questions direct the action of the other characters. As they interact with Pilgrim, the other characters adapt his mythical makeup and doing so encourages them to question their own identity and their own real story of existence. As an effective and astounding mystery novel, this plot relation between the characters is also adapted by the readers.

As one goes deep into the story, readers are encouraged to share with the questions of Pilgrim’s character.

Findley and Pilgrim Pilgrim was a Timothy Findley character who presents all of author’s favorite themes. Findley loved to write about the past and history and that is probably why Pilgrim was depicted as a man who spanned several lives – not forward, but back to the past. This character also depicted isolation and war, though not literary. In the story, Pilgrim was seemingly “isolated” because he was one of a kind – the “immortal” supposedly who cannot die no matter how he tries to do so. Moreover, there was no other story character that showed support for Pilgrim’s claims.

Logic demands story characters – and even the readers – to disregard what Pilgrim believes in. So, in that sense, he is alone, isolated, and is at war with himself and rationality. What’s more obvious here is the fact that Findley tries to evoke people to be more conscious with their own identity and sanity in the same way as Dr. Jung was after he examined the case of Pilgrim. Pilgrim was presented as “nothing” in the story – an ageless and genderless with no exact definition of himself other than the notion that he was a human being.

However, that presentation also made him “everything” about the story – from how it began, how other characters behaved, how the readers will react, how the story will progress, and how the story will end. This character served as the “backbone” of the story, a character which summarizes the plot, setting, ideas, and themes that can be found or deduced from the novel. What does Pilgrim represent? “I have lived many times, Doctor Jung. Who knows, as Leda I might have been the mother of Helen–or, as Anne, the mother of Mary….

I was also crippled shepherd in thrall of Saint Teresa of Avila; an Irish stable boy and a maker of stained glass at Chartres…. I saw the first performance of Hamlet and the last performance of Moliere, the actor. I was a friend to Oscar Wilde and an enemy to Leonardo…. I am both male and female. I am ageless, and I have no access to death. ” The character of Pilgrim can be interpreted in two opposing ways – from a psychological and irrational standpoint or following a mystical approach. Taking into account the view of another prime character in the story – Dr.

Carl Jung, Pilgrim is a representation of the psyche or the “collective unconscious”. He is just a schizophrenic – who, because of his condition – seemingly had experienced different personalities which he himself concocted in his unconscious. The fact that he recognized that he had “multiple lives” implied that he has finally became in touch with consciousness after he has spent years imagining that he “lived” the lives of multiple personalities. This claim is supported by the fact that Pilgrim remembers nothing about being a child again after being “reborn” several times.

Using the first line of reasoning, there is no point in analyzing the behavior and actions of the character because all of the irrational actions will only lead to the fact that he is psychologically ill. If Pilgrim is taken as a schizophrenic character then analyzing whether he is just or unjust is pointless because a mentally ill individual does not have a concrete concept of justice and righteousness nor is he capable of making the right decisions. On the other hand, if analyzed using a mythical standpoint, Pilgrim is taken as a special being – an immortal.

If the concept of Pilgrim’s immortality is accepted, then the actions of the character can be further analyzed. Immortality, an illogical “ability” which is doubted but definitely aspired by many is presented as the key to the full understanding the complex persona of the character and the motivation he has for his actions. In the story, Pilgrim doesn’t talk and he exerts all of his efforts on committing suicide. His main goal is in contrast of what most people want to avoid – “to die”. To explain this willingness to die in this case, it should be noted that unlike normal human beings, Pilgrim has lived multiple lives.

Pilgrim lived as both male and female for thousands of years. He has witnessed to some of the greatest events of human history and he was involved with many notable people who have shaped the world’s history and culture. Despite being part of the continuous evolution of the society, he also experience and endured the miseries of being a human being. And, based on that experience, his willingness to die implies that perhaps most of the aspects in human life were more wearying than pleasing. Pilgrim’s persona provides character to the novel

The character of “Pilgrim” can be analyzed as what the term means – a journey. Pilgrim is society and Pilgrim’s life is human history – a mixture of ages, genders, values, and events that affected the evolution of the human life. As noted by Pilgrim, society has witnessed more hardships than progression – there were more revolutionary wars than radical advancements. So, it might be better if the society will end the changes that it had to endure. But, society cannot die – no matter what it does to destroy itself.

Throughout the long human history, civilizations have been developed and destroyed by various factors but as represented by Pilgrim’s temporal deaths, these social groupings will always be born again. When the society is reborn, it then takes a new form – just like the new persona that Pilgrim develops each time he “lives again”. As such, in the same way that Pilgrim needs Dr. Jung – the society also needs logic and reasoning to “cure” the delusion of weariness and restore its willingness to exist no matter how hard it may be to live and live again. 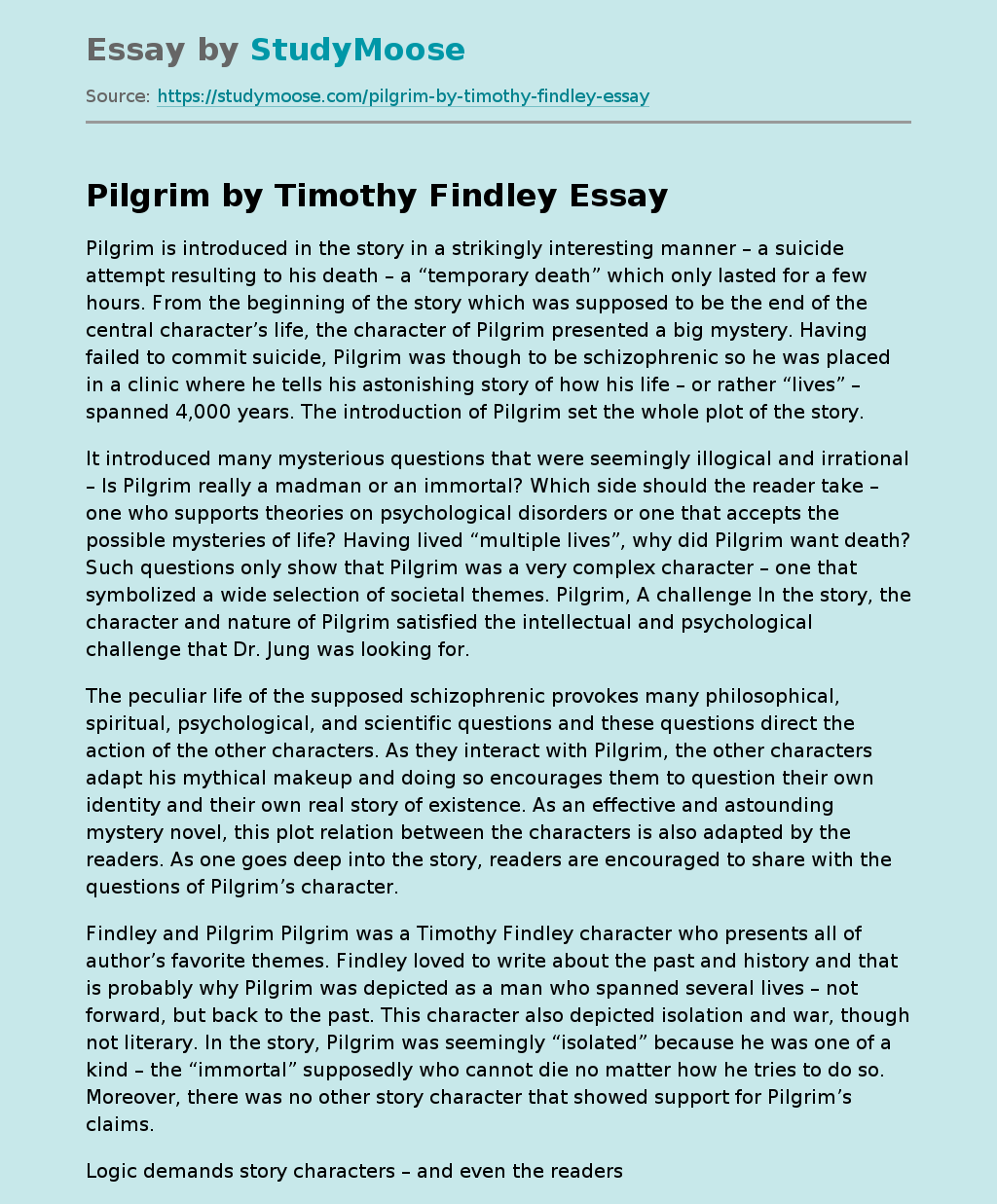