Summary of "The Odd Life of Timothy Green"

It was confirmed by the doctors that a couple, namely Jim and Cindy Green, couldn’t have any children. One night, they were losing their hope and Jim came up with the idea that they would make notes of what kind of child they wanted to cheer Cindy up. They buried those notes in their garden. Then a storm went by. Later on, a child named Timothy sneaked in their house, claiming that he came from the garden. They saw that Timothy had leaves on his legs, and they discovered that Timothy grew from the notes that they buried.

Don't use plagiarized sources.
Get Your Custom Essay on Summary of “The Odd Life of Timothy Green” Just from $13,9/Page

They adopted him and hid his leaves by making him wear socks. Throughout Timothy’s life, he made a lot of people happy, Jim’s father, Cindy’s sister, his football coach, a girl from their neighborhood and many others.

Then fall came along. All the leaves of the trees were changing color, and came falling to the ground, and so did the leaves on Timothy’s legs.

One by one they fell off, until he only had one. He explained to Jim and Cindy that when his last leaf falls off, he will be gone. Then there was a crackling of thunder, the power went off for a second, and when it came back on, Timothy was gone. Later on they found a note from Timothy saying “Never give up”. In the following days, all the people that Timothy made happy had discovered a leaf or two in random places, which were supposedly the ones that had fallen off of Timothy’s legs, and Jim and Cindy adopted another child like Timothy had told them to, to never give up.

Summary of “The Odd Life of Timothy Green”. (2016, Oct 23). Retrieved from https://studymoose.com/summary-of-the-odd-life-of-timothy-green-essay 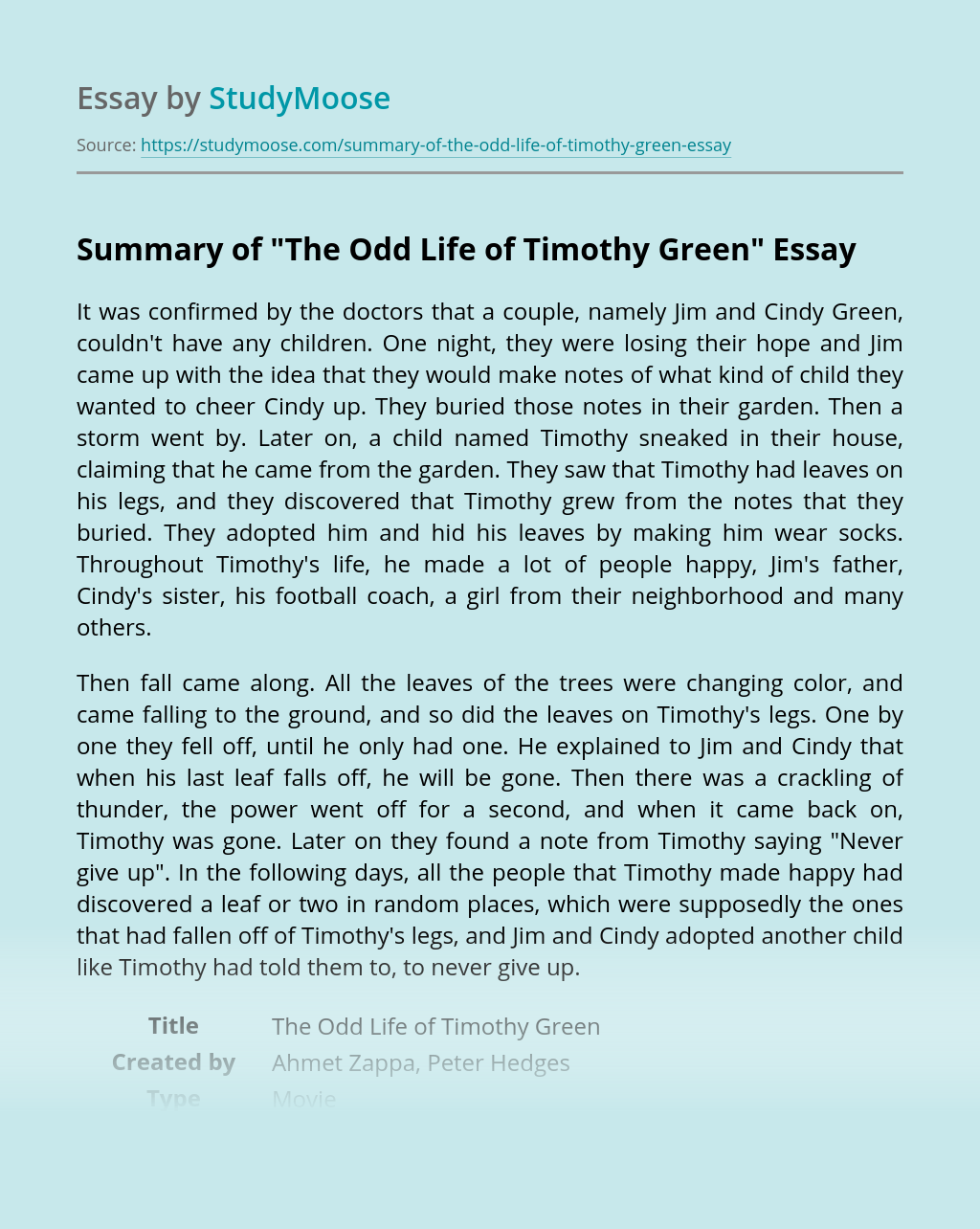 The “Narrative life of Frederick Douglass”

The “Narrative life of Frederick Douglass” was more than an autobiography. It summarized historically, politically and legally what it was like to be a slave back in the 1840’s and on, but through he’s experience & journey also provided a much broader picture and detailed insight of what actually takes a slave to gain freedom...

In our everyday life, every person plays or carries more than one role. Our lives have become demanding. One role would not accomplish our goals from day to day. Carrying different roles also will mold us into stronger, more independent individuals. Each role is different and carries its challenges. Three roles that I carry are...

World is ever changing and advancing in the science and technology. These days it seems hard to escape the presence of technology. Most people will praise the many technological gadgets that they use in their everyday lives. Many of us depend on it to get us through the day, to do our work, to get...

Hostel life is not without its disadvantages. The rich students get sufficient money from their parents and therefore spend lavishly. The poor boarders also urge their parents to increase their monthly allowance and spend their hard earned money on luxuries. The company of the rich also makes them pick up their bad habits. They start...

View sample
My Philosophy of Life

Nowadays, in the XXIst century people are living life of the constant pursuit for money, successful career, what is making impression that only those values are important. Than they have to stop for a while and contemplate about their life goals, their life philosophy. This essay will present my philosophy of life. First of all,...