The Violations in the Giver

Of all of the violations I feel like one of the biggest violations are the mass infanticide to make the community “better”.

Don't use plagiarized sources. Get your custom essay on
“ The Violations in the Giver ”
Get custom paper
NEW! smart matching with writer

“ His head fell to the side. His eyes half open. Then he was still.”, “He killed it! My father killed it!. Because the community needs to achieve sameness and there is a limit to the amount of babies in the community, only fifty children are allowed to advance in the world. Based off statistics there is roughly 2 sets of twins born in each set of 50 births in a year.

Another very major human right violation in the book, is number 16 the right to marriage. “ Even the match of the spouses was given such waiting consideration that sometimes an adult to apply to receive a spouse waited months or even years before a match was approved and announced.”. This human right is violated because of the “need” to not have pain or suffering ie. divorce and heartbreak but it ends the feeling of family and community.

Another violation I feel was violated was the fifth right of No Torture.

“….escalating to a series of painful lashes that left marks on Ashers legs. Eventually, for a period of time, Asher stopped talking.” This shows the violation because he mispronounced a word wrong you shouldn’t be tortured into submission and silence. It would be as if a teacher punched a kid every time the said like to many times out of context or misspelled a word .

Finally, I feel like the biggest violation was #29 of responsibility. You could use all of these quotes to show that when all of these rights were violated the leaders of the community did not have the responsibility to stand up against these terrible violations. These were there laws that they could change or amend and they stood by when there people where and are being tortured, killed and blocked from choice.

Some might say that killing off the infants is a good thing because of the previous overpopulation of their community, but they are murdering innocent children in cold blood. Some also might say that because the people murdering the children are pretty much brainwashed and it isn’t completely murder, but it still is murdering innocent children. Even after all of this, this still is a violation of Human Right #3 the Right to Life. People might think that not having divorce or heartbreak or suffering might be a good thing for a community but because it took away marriage, there is no form of real family or Community where someone can willingly talk to a parent about feelings or things that are happening in their life. Some also may say that if it takes abusing children to get something to change in there lives, they would do it. In an article by Very Well Family .com “Spanking doesn’t teach kids how to behave appropriately. A child who gets spanked for arguing with his brother won’t learn how to get along better in the future.”.

While in the book they do not spank but abuse this still is relevant because the hitting of children does not teach them that what they did is wrong and in the end can really scar them.

The Violations in the Giver. (2021, Apr 15). Retrieved from https://studymoose.com/the-violations-in-the-giver-essay 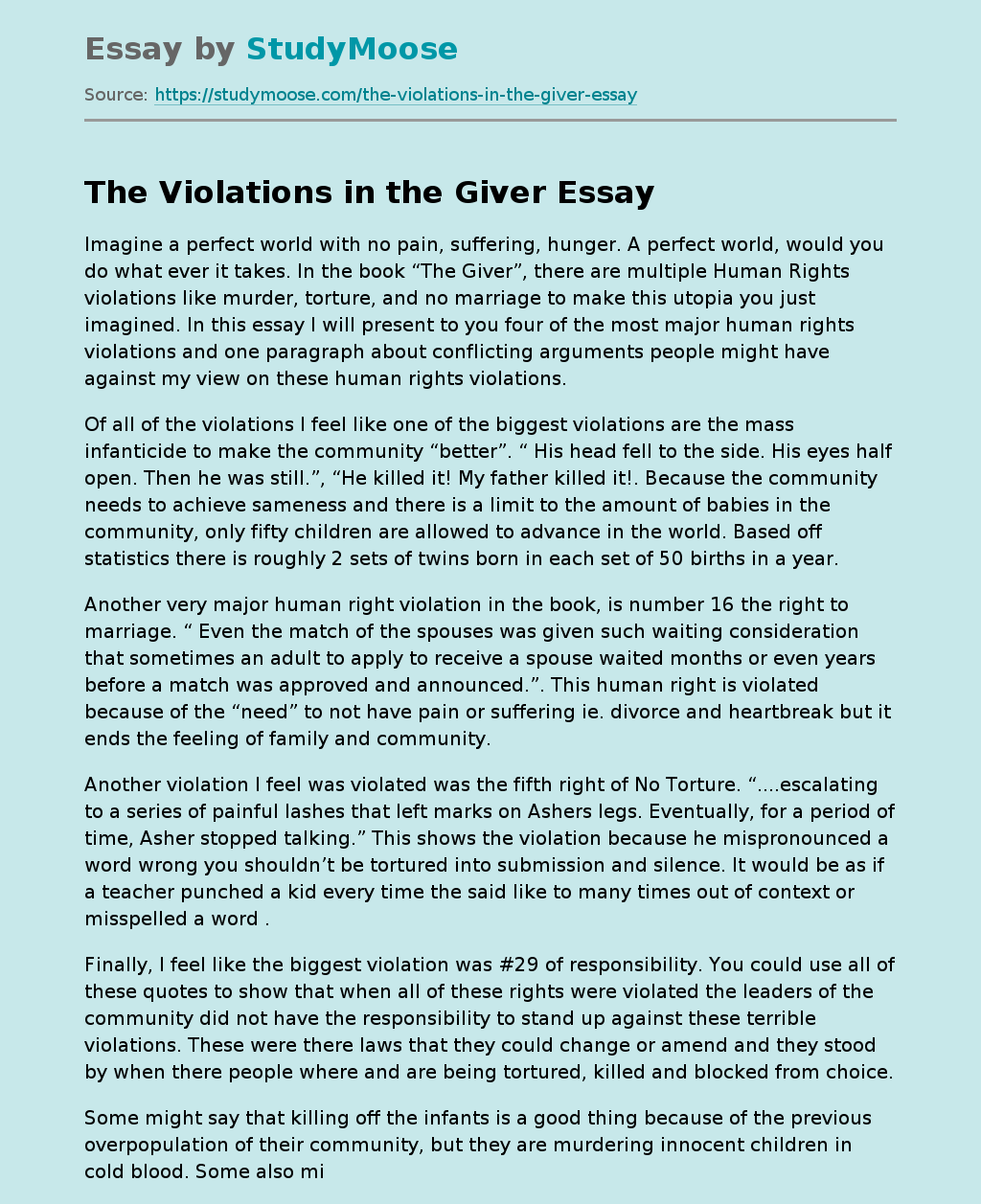