Bram Stoker’s Dracula is a work of a gothic novel that is published in 1897. It reflects the problems of Victorian society and its anxiety towards sexuality with the use of vampirism. The novel is structured as an epistolary or episodic novel: it consists of the letters, journal notes of the characters, newspaper documents, and reports. The epistolary style allows Bram Stoker to construct the novel from different narratives; with multiple narratives in the story, the readers can understand the motivation of the characters and they can read the story from different perspectives.

Don't use plagiarized sources. Get your custom essay on
“ The Victorian Society in Bram Stoker’s Dracula ”
Get custom paper
NEW! smart matching with writer

At the same time, the use of different narratives shows the difference between the characters such as Lucy and Mina. The narrative of their letter conflicts with each other; Lucy writes in a more cheerful tone like a little kid while she expresses her discomfort with the norms of society. Compared to her Mina is reflected as more intelligent and restrained in her letters. The conflict between these characters is not limited to their narration as they represent the different sides of the women in the Victorian Era.

Victorian Era was the period of rigid rules where sexuality, especially female sexuality, forced to be repressed. In this period women were expected to be chaste, submissive, fragile, and pure like ‘an angel in the house’: their duty was to support the men around them while they deprived of anything that is related to their sexuality. Women who openly showed their sexuality seen as a threat to the morals of society, these kinds of women reflected in the literature as well as is seen in Dracula.

‘I seemed somehow to know her face, and to know it in connection with some dreamy fear, but I could not recollect at the moment how or where. All three had brilliant white teeth that shone like pearls against the ruby of their voluptuous lips. There was something about them that made me uneasy, some longing and at the same time some deadly fear. I felt in my heart a wicked, burning desire that they would kiss me with those red lips.’

‘I was afraid to raise my eyelids but looked out and saw perfectly under the lashes. The girl went on her knees and bent over me, simply gloating. There was a deliberate voluptuousness which was both thrilling and repulsive, and as she arched her neck she actually licked her lips like an animal, till I could see in the moonlight the moisture shining on the scarlet lips and on the red tongue as it lapped the white sharp teeth’

The female vampires described as ‘voluptuous’; they are sexually attractive, and they awake the repressed sexual desire in Jonathan. While Jonathan longs for the female vampire as a result of his sexual desires because society restricts sexuality, he is disgusted by the woman in front of him who openly shows her sexuality. Throughout the novel, transgressive women such as female vampires depicted as ‘voluptuous’, the males of the novel are both attracted to them but also disgusted by them. Lucy and her transformation into a vampire is an important example of this idea.

At the beginning of the novel, Lucy described as a sweet and pure woman; like Mina, she is depicted as a chaste woman. But the two women differ from each other as Lucy expresses her desires and her discomfort with the limitations of women in society in her letters. She wants to marry all three of her suitors as she says this idea is seen as ‘heresy’ in society. Another important feature of Lucy is her appearance; unlike Mina, she is described as an attractive woman, she is aware of her beauty as well and she uses it to affect the men around her. Therefore, because she is already conflicting with the norms, she becomes an ideal target for Dracula. Dracula as the force of nature represents the manifestation of sexuality which was repressed in Victorian society; by attacking the women and sucking their blood he awakens the repressed sexuality in them. Not only he only attacks the women in the novel but after his attacks, he causes the transformation of the women as it is seen in Lucy. Before her transformation Lucy was depicted as ‘pure sweetness’ but when she is turning into a vampire she becomes ‘tainted’ ‘disgusted’ and ‘cold’. Her lust is indicated many times throughout the novel, and she tries to trick males with her look. Thus, like the female vampires who attacked Jonathan she both disgust and attracts the males as well; because she is sexually active, she must be destroyed by the males as well. Like Lucy Mina is attacked by Dracula as well but her transformation wasn’t completed: unlike Lucy Mina is the embodiment of the ideal Victorian women. She is pure and fragile like an angel, she is very intelligent as well as Van Helsing describes: ‘She has man’s brain—a brain that a man should have been the much gifted—and a woman’s heart’. Her intelligence doesn’t cause a threat since she uses it to support the men around her: she learns shorthand to help her husband, even she was under the influence of Dracula she used the powers he gave to her to help the men to find him. Like an ideal Victorian woman, Mina never expresses her sexual desires and she also becomes a mother-like figure to the men around her, comforting them when they need her. Compared to Mina’s maternity Lucy is an unconventional woman; instead of being a mother figure she feeds upon children thus declines maternity.

The conflicted characterization of these two female characters might suggest the clash between the Victorian Angel in the house and The New Women movement which emerged in the late 19th century. Mina as a representative of the Angel in the house obeys the norms of society such as being in a monogamist relationship, compared to her Lucy tries to break through the restrictions that are forced upon the women by male-dominated society. Van Helsing’s conversation with John Seward about blood transfusions is an important part of Lucy’s subversion of society’s norms: “Well, for the life of me, Professor,” I said, “I can’t see anything to laugh at in all that. Why your explanation makes it a harder puzzle than before. But even if the burial service was comic, what about poor Art and his trouble? Why his heart was simply breaking.”

“Just so. Said he not that the transfusion of his blood to her veins had made her truly his bride?”

“Yes, and it was a sweet and comforting idea for him.”

“Quite so. But there was a difficulty, friend John. If so that, then what about the others? Ho, ho! Then this so sweet maid is a polyandrist, and me, with my poor wife dead to me, but alive by Church’s law, though no wits, all gone—even I, who am faithful husband to this now-no-wife, am bigamist.”

This quotation indicates the relation between blood and sexuality: the exchange of blood, bodily fluids implies intercourse between those four men and Lucy. With blood transfusion, Lucy is able to break from the oppression of her sexuality and live her sexuality freely. Therefore, from the relation of blood and sexuality, Dracula’s blood-sucking activity can be interpreted as an act of intercourse as well. By sucking the blood of females Dracula reveals the repressed sexuality of women, because of the fear of sexuality in the Victorian era he is represented as a monster who violates society. But at the end of the novel, the triumph of Victorian ideals is announced through the death of Dracula and other threats of the society, such as female vampires and Lucy, who are destroyed by the representative of the male dominant society. Victorian Angel in the house protects her place as well through the death of Lucy and Mina’s salvation at the end of the novel.

Dracula’s blood-sucking activity can be interpreted as an act of intercourse as well. By sucking the blood of females Dracula reveals the repressed sexuality of women, because of the fear of sexuality in the Victorian-era he is represented as a monster who violates society. But at the end of the novel, the triumph of Victorian ideals is announced through the death of Dracula and other threats of the society, such as female vampires and Lucy, who are destroyed by the representative of the male dominant society. Victorian Angel in the house protects her place as well through the death of Lucy and Mina’s salvation at the end of the novel. 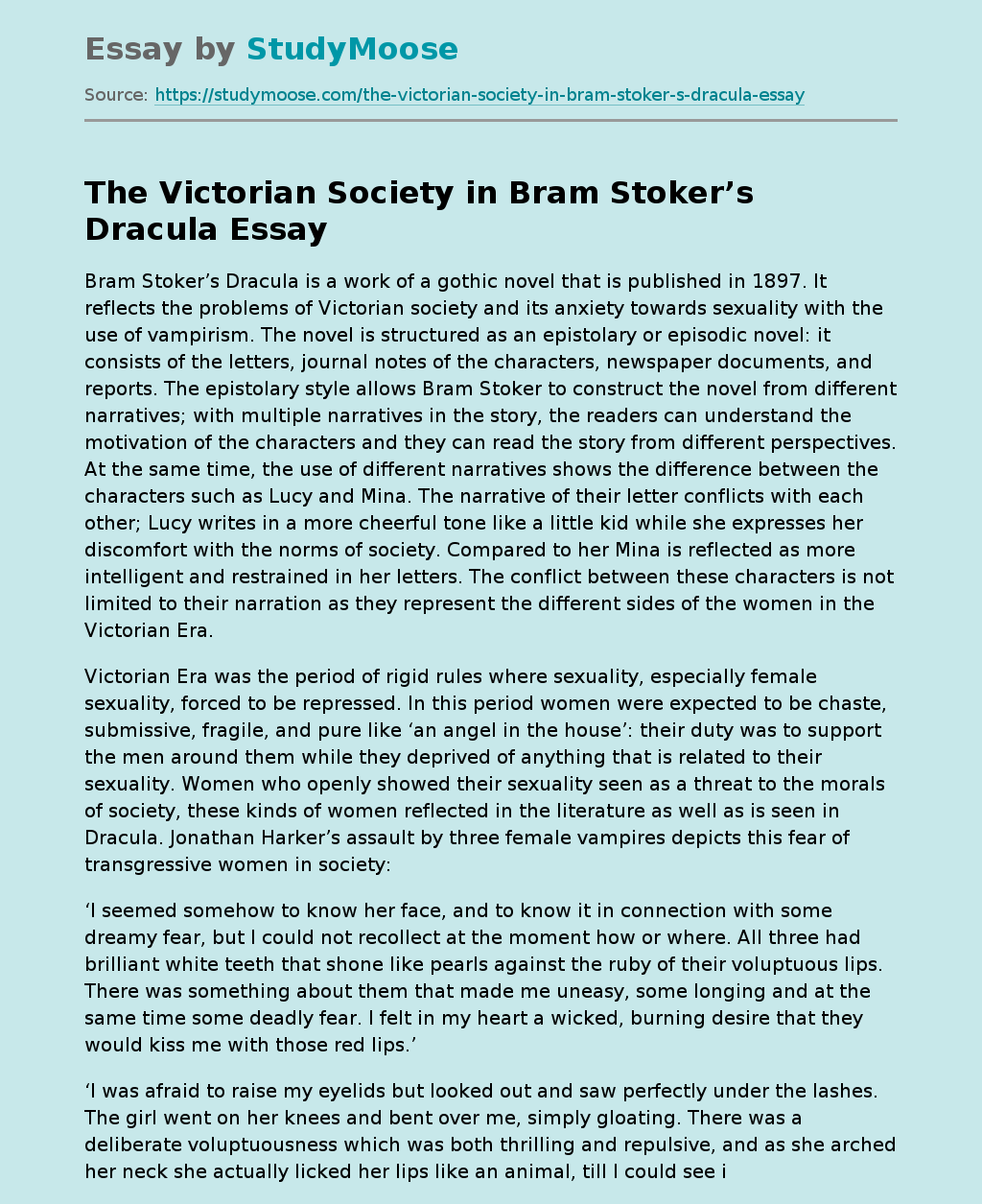