Although it is rather a subjective concept, “literary merit” essentially means the worth, quality, or excellence of a writing relative to other well-renowned literary masterpieces. In a Constitutional framework, the absence or presence of literary merit would determine the government’s limits to freedom of expression. To possess literary merit would mean that the work is not obscene. The landmark case of Miller vs. California enumerates key guidelines to ascertain the literary merit of a particular text, to wit:

1) Whether the average person, applying contemporary community standards would find that the work, taken as a whole, appeals to the prurient interest…

2)  Whether the work depicts or describes, in a patently offensive way, sexual conduct specifically defined by the applicable state law , and

3)  Whether the work, taken as a whole lacks serious literary, artistic, political or scientific value.

Don't use plagiarized sources. Get your custom essay on
“ Literary Merit in Bram Stoker’s Dracula ”
Get custom paper
NEW! smart matching with writer

Fundamentally speaking, in any framework, to have literary merit is to have value.

The popularity of Bram Stoker’s novel Dracula has reached such endemic proportions that it has been claimed to be the most recognized book next to the Bible.

A Victorian novel with the distinctive gothic appeal toward the macabre, Dracula has undeniably become a classic milestone in horror fiction. Establishing its literary merit however, is a different matter. A review from The Athenaeum, an influential periodical in Victorian England described the novel as “sensational.” The review further states:

Dracula is highly sensational, but it is wanting in the constructive art as well as in the higher literary sense.

It reads at times like a mere series of grotesquely incredible events; but there are better moments that show more power, though even these are never productive of the tremor such subjects evoke under the hand of a master. (The Athenaeum, 26 June 1897). Emphasis supplied.

The unremitting succession of the bizarre, the gross and the fantastic, as explained in the review, would seem tantamount to a lack of refinement in the “higher literary sense.” This observation was supplemented by another review of the same sentiment:

The plot is too complicated for reproduction, but it says no little for the author’s power that in spite of its absurdities the reader can follow the story with interest to the end. It is, however, an artistic mistake to fill a whole volume with horrors. A touch of the mysterious, the terrible, or the supernatural is infinitely more effective and credible. (Manchester Guardian, 15 June 1897). Emphasis supplied.

As interpreted, instead of relying on the intelligence of the reader to grasp on their own the significance of subtle nuances and take in the various shifts and twists in the story as it evolves, Stoker instantly and unceasingly bombards the reader with an onslaught of palpable and shocking horrific scenes as if the reader is too untrustworthy and unsophisticated to deal with subtleties.

If there seems to be little literary merit in the intellectual or scholarly sense, Dracula is still credited for its universal allure. The Pall Mall Gazette, in a commentary of Dracula states:

…the story deals with the Vampire King, and it is horrid and creepy to the last degree. It is also excellent, and one of the best things in the supernatural line that we have been lucky enough to hit upon. (Pall Mall Gazette, 1 June 1897). Emphasis supplied.

The universal allure of Dracula is probably in its resurrection of the vampire lore in a straightforward, practical and illustrative fashion. A vivid and uncomplicated quote from the novel confirms this:  “I shall cut off her head and fill her mouth with garlic, and I shall drive a stake through her body” (Stoker, 261). The novel’s refreshing simplicity is also evidenced in the following review:

Here, for the latest example, is Mr. Bram Stoker taking in hand the old-world legend of the Were-wolf or vampire, with all its weird and exciting associations of blood-sucking and human flesh devouring, and interweaving it with the threads of a long story with an earnestness, a directness, and a simple good faith which ought to go far to induce readers of fiction to surrender their imaginations into the novelist’s hands. (The Daily News, 27 May 1897). Emphasis supplied.

While Bram Stoker’s Dracula is deficient in literary refinement, it nonetheless is considered to have literary merit by virtue of the fact that it captures man’s imagination. It certainly has value for having the extraordinary capacity to fascinate multitudes across time. Ultimately, its worth, quality or excellence is confirmed by its ceaseless popularity. 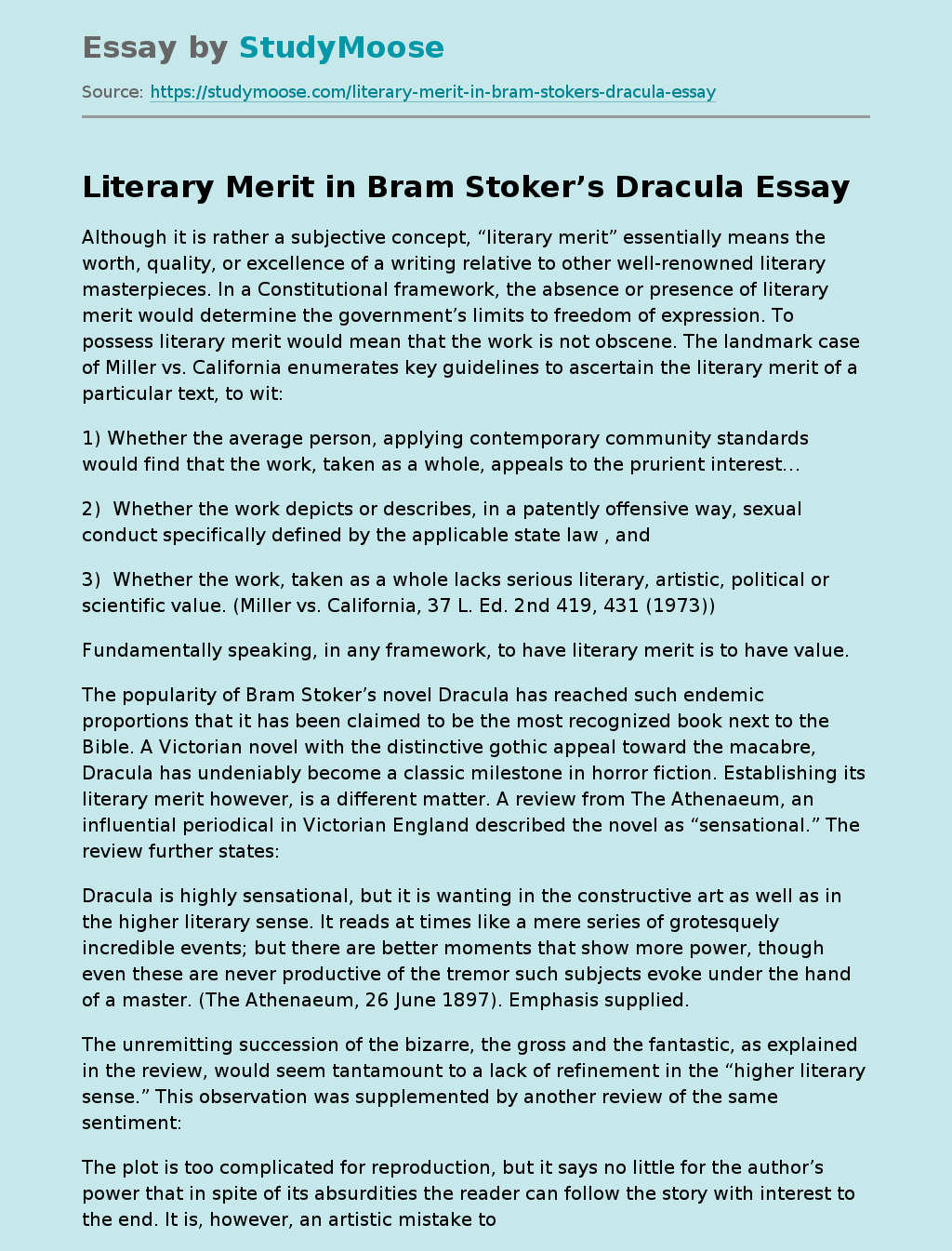