Primarily, it is my assertion that the release of Dracula by Bram Stoker, as comprised during the scientific period, played a paramount influence to gothic supernatural tales through the use of filling the reader’s mind with new horror and romantic thoughts towards vampires. Being prominent during the 18th century, the Gothic era was already well established with numerous amount of films and novels already published. However, with Stoker’s release and heavy Gothic motifs, the genre sparked even more with his desire to evolve vampires into societal fears, which would intrigue an audience’s mind even more.

Don't use plagiarized sources. Get your custom essay on
“ Analysis “Dracula” by Bram Stoker ”
Get custom paper
NEW! smart matching with writer

The scheme of the novel is essentially Count Dracula attempting to spread his evil castings upon a group of men and women, who are attempting to vanquish the town of any source of evil. It seems that Stoker’s use of dramatic and gloomy choice of words makes the novel show elements of horror, terror, sorrow and sometimes even romance. The legend of the vampire did not take place in English literature until 1734 when it was used in an Anglo-Saxon poem titled ‘The Vampyre of the Fens'(Barnes).

Because of this, Bram Stoker’s interpretation of Dracula takes this fable and attempts to show how a tremendous source of evil can be written in the form of a novel. In the novel, Count Dracula is on a mission to head to England with a conflict between him and Professor Abraham van Helsing, who is in charge of a group of men, including women.

Stoker makes sure to transform the traditional image of vampires during this period into one with a dramatic amount of gothic, murderous material. I found he executes this precisely by including plentiful amounts of references to blood and romance. ‘And you, their best beloved one, are now to me, flesh of my flesh; blood of my blood; kin of my kin; my bountiful wine-press for awhile; and shall later on be my companion and my helper'(Stoker 295). It is clear that Stoker wanted to do more than just jot down a novel about the traditional vampire, but instead include more societal fears within the character and promote more of a romantic, psychological impact rather than other accustomed books at its time.

Moreover, many believe that much of Brad Stoker’s ideas of creating Dracula derived from an ancient 15th-century Romanian prince by the name of Vlad the Impaler, but this idea is still up for controversy. Vlad, being categorized as a savage ruler, involved having his deviants being impaled by a number of sharp stakes and eventually progress inside of the flesh of their torso. His character, mainly consisting of an eager for his prisoners to produce substantial amounts of blood, made for a strong resemblance to the character of Count Dracula with extremely similar traits. Some evidence suggests, ‘Scholars assumed that Dracula was based on Vlad because Vlad was a member of the noble family House of Dracula, whose title translated to Voivode Dracula in English'(Bibel).

Furthermore, at the time of writing Dracula, Brad Stoker takes the patriarchy beliefs that were erupting in popularity for its time and takes the need for sexual changes in civilization into account by associating them into his female characters in the novel. During this era in Victorian England, men who were becoming more accustomed to religious beliefs and holy motifs believed that a society that is under control by a government should have the men hold the most power while the women are largely prohibited from this ability. With men were becoming more intimidated by the thought of women during the time, Stoker includes this idea into the novel.

Additionally at the time of this era the release of the famous, feminist-inspired slogan ‘New Women’ occurred, which allowed for an increase in independent women fighting for their own rights. The novel would fight against a male-dominated culture and allow for women to oppose traditional gender roles. Stoker made sure to include these feminist roles in his novel by including female leader Mina Harker, who would serve as a heroine in the book. Mina not only serves as a courageous woman with noble qualities but ‘if it were not for Mina Harker, the reader might conclude that Stoker is a repressed Victorian man with an intense hatred of woman or at least a pathological aversion to them (Senf 34). Because of this, many of the female vampires in his novel are capable of enacting actions that typically only men are capable of, such as breeding without a man, being violent to others such as hunting children, and even being hostile to other males. All of these actions are opposing the traditional female role and thus allow for the idea of a ‘New Woman’.

For instance, a female character in the novel known as Lucy Westenra has the astonishing ability to transform into a vampire. Lucy, having the traditional aspects of a woman, transforms into a demonic, dark-haired seductress that is eager to feed on innocent children., were formidable, fearsome, and monstrous creatures that, at the time, opposed the traditional views of what the Victorian culture saw in its women. It is clear, that Brad Stoker’s primary interest when creating this novel was not just for the creation of a new vampire tale, but to promote the awareness of feminism and increase the roles that women could play in a novel, or in the everyday standards. Stoker addresses the exclusion of women and the awakening of feminism ideals, by giving female characters traits that reject traditional gender roles.

Analysis "Dracula" by Bram Stoker. (2016, May 08). Retrieved from https://studymoose.com/analysis-dracula-by-bram-stoker-essay 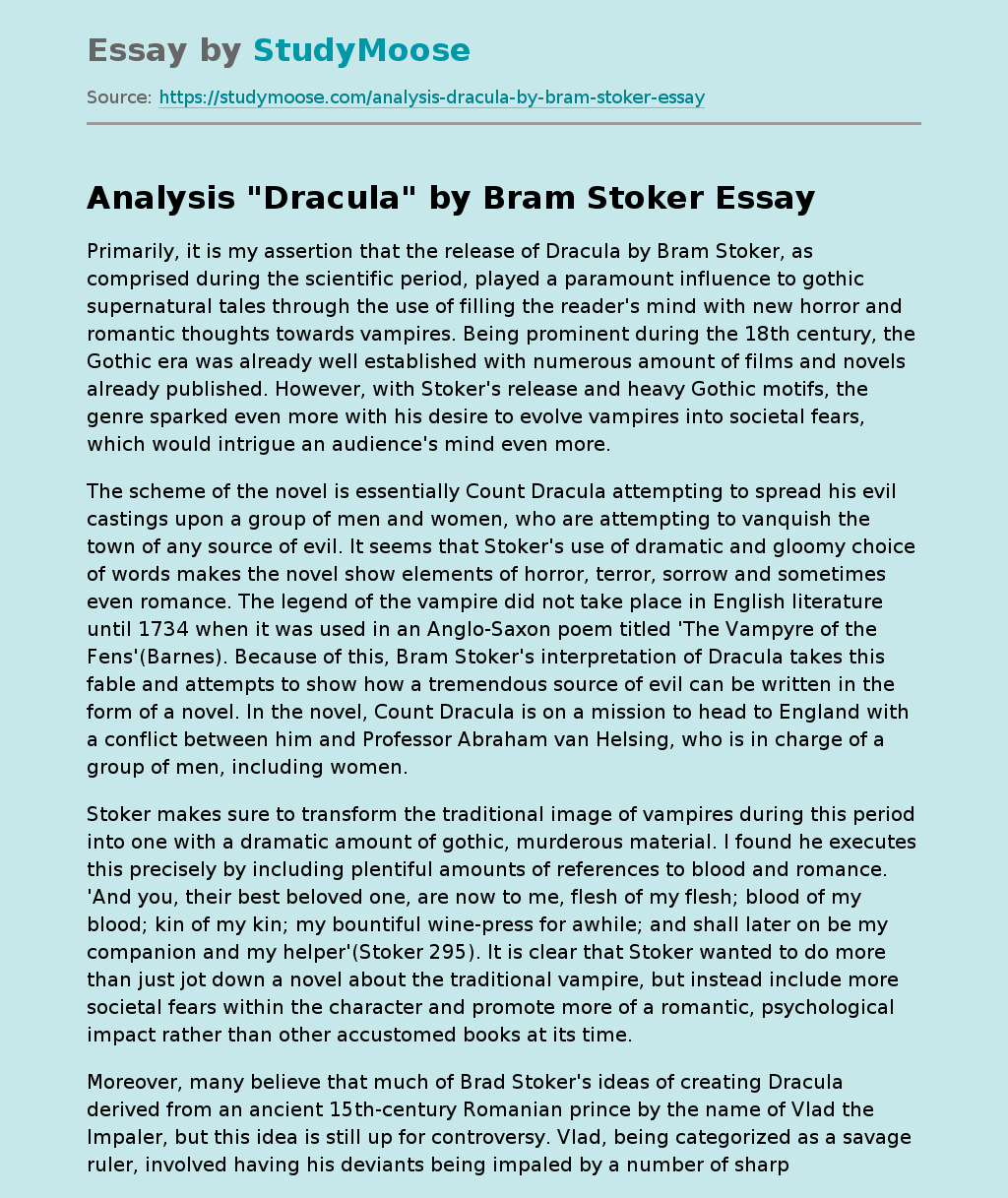