Several conflicts are dramatized in The Unknown Citizen, the most prominent being: conformity of the middle class, government manipulation, and the loss of individualism to the standards of an average citizen. The speaker of this poem is non-traditional as the poem is, in fact, an inscription on a “marble monument erected by the State. ” The inscription is dedicated to a “JS/07 M 378”—presumably, “The Unknown Citizen,” although this term only appears in the title. The Unknown Citizen is essentially an elegy, a lament for the dead, written by either a government official or a strong believer in the government.

Don't use plagiarized sources. Get your custom essay on
“ The Unknown Citizen Explication ”
Get custom paper
NEW! smart matching with writer

This becomes clear through the speaker’s repeated use of possession, such as in line 12, “…our Social Psychology workers found…” and “Our researchers into public opinion are content…” . These references establish the poem’s criticism of government manipulation and very closely mirror the same notions within the novel 1984. The speaker offers insight into just how severe this government infiltration is, mentioning an active “Bureau of Statistics”, a “Health-card” administered to all citizens, and personal information drawn from “…reports on his conduct…”.

Another conflict that arises within the poem is that of a dominating middle class. The author defines the “Modern Man”—which is also capitalized to represent a distinct faction—as one who possesses all the “necessities,” including: “a phonograph, a radio, a car, and a Frigidaire”. The poem becomes almost satirical here. The speaker continues, “He was married and added five children to the population…the right number for a parent of his generation”.

The poet outlines society and the government’s idea of the ideal middle class modern man, however, with much irony.

Regardless, with this elegy, the author intends to praise the life of the unknown citizen, but succeeds only in detailing the fact that his life was undisruptive and that he closely followed the expectations of a rigid society. Among his “praises,” for example: “When there was peace, he was for peace: when there was war, he went”. In this, it becomes clear to the reader that you do not want to be an average citizen; you do not want this to be your elegy. Some critics argue this, however, as Auden stating that there is nothing disgraceful in being unknown.

The poem is, above all, a satire of the way conformity hinders the individual and leaves ridiculous and solely external distinctions between human beings. Auden presents an allegory in The Unknown Citizen that begins even before the poem itself. The phrase “Unknown Citizen” appears only once—in the title. This term is an immediate allusion to and parody of the “Unknown Soldier,” especially considering the details of who the poem is dedicated to and the fact that it is found on a marble monument, much like those one might expect to see in Washington, D. C. here the United States is home to the Tomb of the Unknown Soldier.

The “Unknown Solider” is a soldier who cannot be recognized after being found in battle. This sometimes-controversial idea can be interpreted to mean that many people die as unknowns because they lived uninfluential lives. Aside from this large allegory, the poem uses only a few rhetorical devices. In line four, for example, “…in the modern sense of an old-fashioned word, he was a saint” is quite an exaggeration because being “one against whom there was no official complaint” is hardly saintly.

Another example, in line 20, is “…had everything necessary to the Modern Man. ” If this were not an exaggeration, it would be extremely disturbing to agree that all one needs are the classic symbols of a squeaky-clean 1930s home: a car, a radio, and a refrigerator. This 1930s theme continues in two particular allusions. In line eight, it is written that the citizen was employed by “Fudge Motors, Inc. ” which closely resembles the automobile giant of both then and now, Ford Motors, Inc. , but is, through “fudge,” slightly more appealing.

Next, in line 18, are mentions of the groups “Producers Research” and “High-Grade Living” which are likely allusions to Consumer Reports and Good Housekeeping, respectively. Both U. S. publications are tokens of a middle class, “perfect” society. The Unknown Citizen consists of both patterned meter and rhyme, however, both are inconsistent. The meter is loosely anapestic, meaning that each metrical foot consists of two unstressed beats followed by a stressed beat. Line one is an example of such: “He was found by the Bureau of Statistics to be. ” Other anapestic lines are scattered throughout the poem.

The rhyme scheme begins as ABAB and then, in line 9, proceeds for some time in rhyming couplets. These patterns are occasionally broken, however. Consistent or not, this rhyme does create a sort of melodious sound while reading. Some lines even resemble the simplistic and song-like style of nursery rhymes. For example: “Yet he wasn’t a scab or odd in his views/ For his Union reports that he paid his dues”. This type of sound is rather merry and is a stark contrast to the less-than-celebratory subject matter, which is yet another development of irony.

The poem, because of how it rhymes, is also highly particular, almost robotic or even “perfect,” which parallels to the citizen’s “perfect” life. Auden completes the poem masterfully by leaving two questions on the monument— questions that any reader would beg after such an elegy. The speaker asks “Was he free? Was he happy? ” and is immediately defensive upon answering, an obvious tone shift. Although the speaker insists that “had anything been wrong, we should certainly have heard”, it is impossible to trust a government that erects expensive marble statues in honor of nothing more than numbers, statistics, and the status quo. 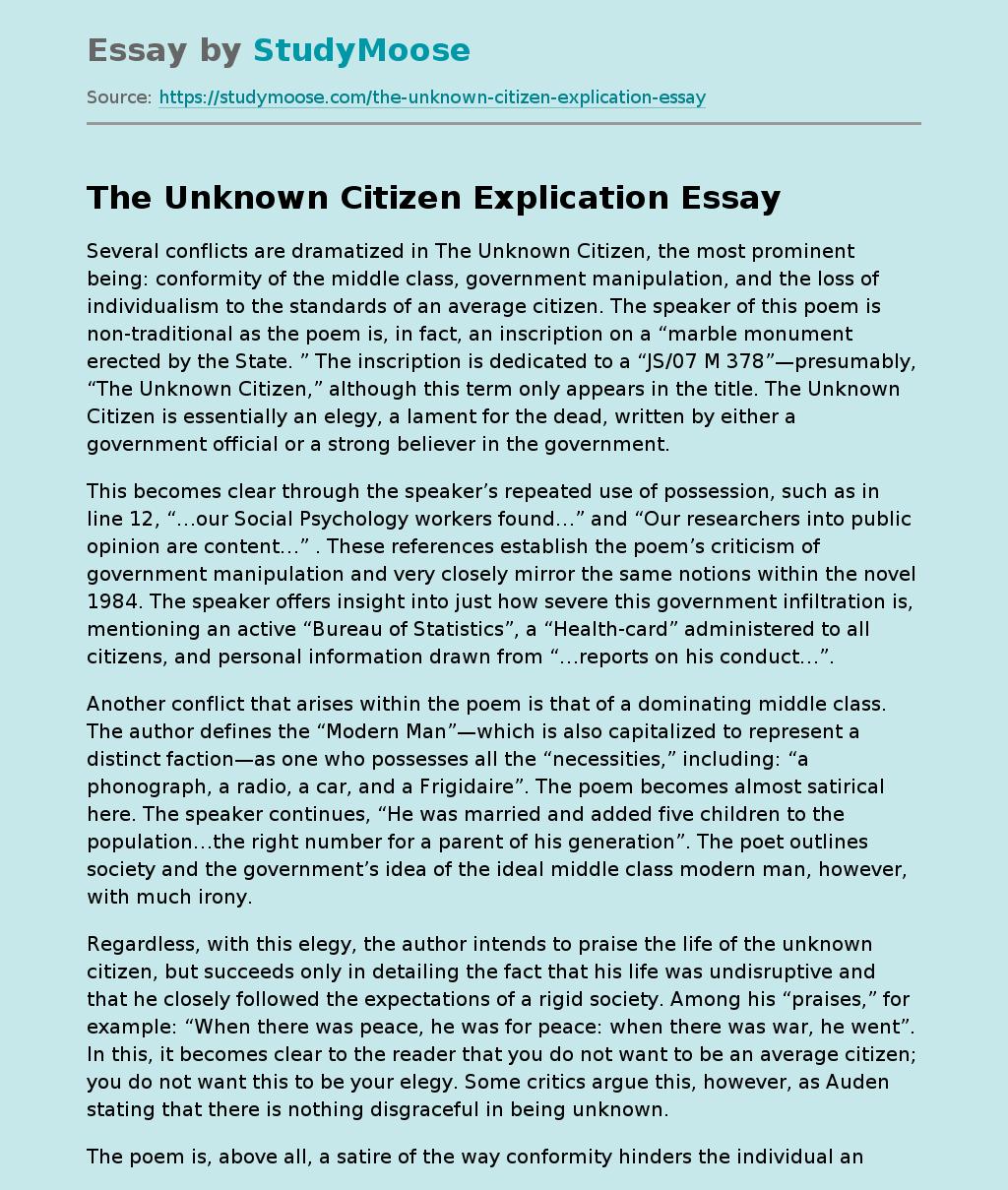