The Two Parts of To Kill a Mockingbird

When an author divides a novel into two separate parts he or she does it purposely to show either a large dynamic change in a character or little to no change at all. Harper Lee, author of the novel To Kill a Mockingbird, separates her novel into Part I and Part II. Part I is more of an overview that foreshadows what is to come later on; she lets the reader get to know the characters and the setting of the book which takes place during the Great Depression in the deep south of Maycomb, Alabama.

Don't use plagiarized sources. Get your custom essay on
“ The Two Parts of To Kill a Mockingbird ”
Get custom paper
NEW! smart matching with writer

As the book progresses and the reader begins Part II the reader becomes submerged into a trial that will change the little town of Maycomb forever. While some aspects of the town are willing to change to make things work, others show the ability to make a gradual change and some things resist change completely.

In the 1930’s race and gender create strong divisions within society.

The Deep South of Alabama is a hard place for most blacks to live due to the white’s refusal to give up their belief of supremacy. This sense of racism is so extreme and vulgar that the Whites will do anything to stay separated from the blacks of the community. Not only is this sense of racism strong in this community of Maycomb but gender distinctions are as well. Women are expected to hold a certain spot in the social scene but are never seen equal to men.

Between men and women the distinctions were not a radical as the distinctions between whites and blacks but they are still very visible. Even at young ages girls are supposed to act a certain way, “It’s time you started bein’ a girl and acting right!” (Lee 115). Scout’s older brother, Jem, to Scout shows how even at such a young age girls are expected to know their place and not do what boys do.

Although the harsh distinctions in gender and race sometimes cause problems in coming together as a community, tragedies tend to bring people closer than ever. Miss Maudie’s house fire symbolizes how people can come together despite differences. All the men on the block came together to save Miss Maudie and her house along with the firemen coming to put the fire out. This sense of community is strong in Part I because we see that coming together is possible. Atticus, Jem and Scout’s father, is seen to be one of the leaders in the town and is able to shoot down the mad dog coming towards the people, who signifies the community coming together but also the shooting down of racism in the town. This “mad dog” has the very spreadable disease of rabies and is supposed to symbolize the madness of racism coming through the town.

When Atticus shoots the dog it suggests him shooting down racism, leading the reader to believe that Atticus has this power to bring the community together. Calpurnia, the Finch’s black housekeeper, also plays a role in caring for the entire community by knocking on everyone’s doors letting them know that they should stay inside. It is worth noting that Cal goes to the front doors knocking and warning people, even though she is black and should be using the back doors. This shows how in this crisis the community can forget about race distinctions and work together. This sense of community makes the reader think that the community is stronger than racism and that maybe the community is capable of changing for the better; and however as we learn in Part II that sense of community is broken once the trial of Tom Robinson approaches.

Part II marks the changes within and abstinence of standstills in the community. Within Part II the trial of Tom Robinson comes alive. Tom Robinson is a handicapped black man who is convicted of raping Miss Mayella Ewell. The Ewell’s are the white trash of the town who are looked down upon because Mr. Ewell is a drunken who neglects his family and possibly abuses them. The irony of all this is that even though the Ewell’s are known to be trashy they still hold a higher social ground than Tom, who is black and a very decent human being who will do jobs around the hose for Miss Mayella for free. This shows the racism in the town and how it has yet to change, and it also shows how the blacks are the lowest of the low. In Part II we also learn how the community can cyclically change from being together to not and then being together again but we also see how a woman’s role in society and the racism towards blacks do not change at all.

The trial, in this community it could be known as the trial of the century. This trial is the one thing that brings the entire county together into one town, into one court room. Atticus is Tom’s lawyer and everyone in town is shocked that he would agree to seriously undertake the task of defending Tom. He knows that the chances of Tom winning are slim to none, but Atticus believes in justice and fairness. Atticus is a man of integrity and would rather loose knowing he did the right thing rather than taking the easy way out and doing what people want him to do, “The main one is if I didn’t I couldn’t hold up my head in town, I couldn’t represent this country in legislature” (75). This shows Atticus’s integrity and nobility because he knows what he is doing is difficult but he did it anyway because he wanted to do the right thing. Atticus fighting for Tom also relates to him shooting down the mad dog, which represents racism in the town. Now the trial gives Atticus a chance to change these close-minded people in the town and make them realize that the blacks are just the same as them.

In the end justice is not served and the jury votes in favor of Mayella Ewell. Atticus soon realizes that the jury had made up their mind as soon as they had walked into this case. What this shows is that no matter what, when a black man is up against a white lady, the black man will always lose even if he is not guilty. This also shows that one man cannot be the only person to change a whole community. After the case Tom tries to escape from jail but is shot 17 times and dies. This circumstance shows how people do not change; the damage from the trail has ripped the Robinson family apart, it had already brought pain and suffering, but the whites do not care. They feel he had to be dead just because he is black and found guilty in a crime he most likely did not commit. This tragic event shows how some people do not change, how their stubbornness blinds them to how wrong their actions are.

People can be so focused on was they think is wrong and are unable to look past the color of someone’s skin; the people of Maycomb choose to think Tom is not as good as them and as a result, they take his life away from him. In the beginning of the trial the community in a sense was all together, being in that one court room made everyone comes together for the same cause. After the killing of Tom the community was ripped apart again, all because of the hatred towards a black man. Harper Lee shows that throughout the book and throughout life some people cannot change, that even when a community is brought together there will still always be underlying things that rip apart a community which stop change from happening.

Women are a part of this community of Maycomb and even though their roles do not seem as important as men’s, they are a part of society. We saw through the snowman that the women are separated from men. Towards the latter part of the novel Aunt Alexandra’s missionary meeting includes a “tea party” was intended to teach Scout how to be a lady. Throughout this party Scout attentively watches and listens to the women speak; through all this she truly found that all they were saying was petty gossip. She also came to understand that women tend to be hypocrites; they say that they do for the Lord mean while they are talking down or being rude to their black housekeepers. In contrast to these petty ways of the women Miss Maudie is a woman who carries herself independently through her thoughtful ideas and sensitivity.

She does not let these women influence her and she continues to be kind and open hearted to everyone. Yet Miss Maudie is just one person and even though she is influential in the children’s lives she is not so influential towards the other women. Scout being at such a young age can still realize that certain roles are expected from women which include carrying on domestic duties while having a social life, and caring for the children. Although women supposed to hold a certain place in the social scene, they are not allowed to hold a place on a jury. She realizes that women are held at a lower ground than men and less is expected from women than men. The differences and separation between men and women show another instance where Lee demonstrates the lack of change between Parts I and II, and how society will always contain gender separations.

Harper Lee was able to show different variations of change in people, ideas and the community of Maycomb in both parts I and II. Lee’s dynamic novel is based on the beliefs of racism, segregation and much distinction, factors that cause problems in society; some problems are more easily fixed than others and some take more than one person to fix. People and human nature are the root of all the wrongs and rights and we can see how sometimes change in people and behaviors comes and goes, happens slowly or just does not happen at all in the novel, To Kill a Mockingbird.

The Two Parts of To Kill a Mockingbird. (2016, Apr 05). Retrieved from https://studymoose.com/the-two-parts-of-to-kill-a-mockingbird-essay?post 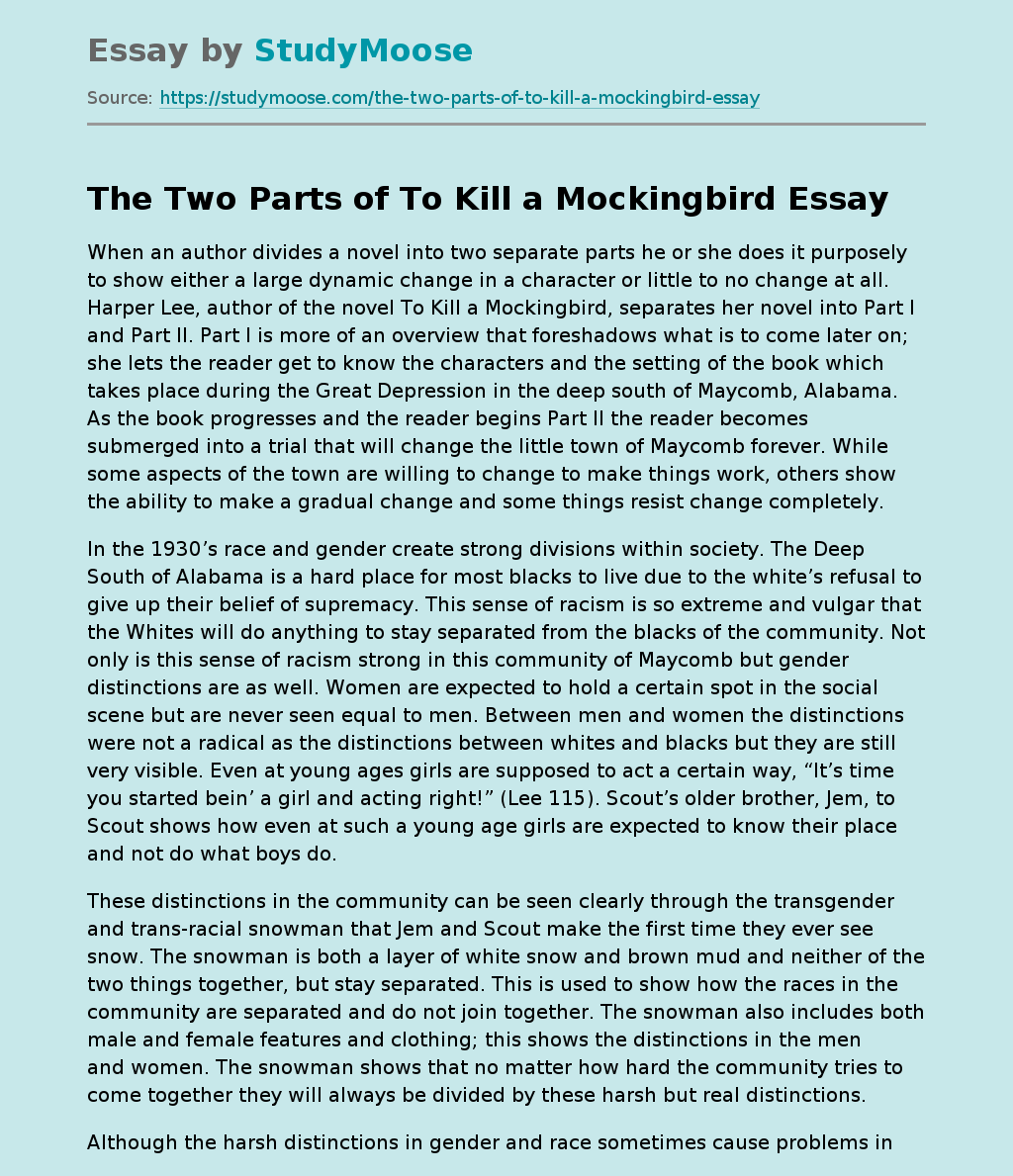