The Tortoise and the Hare

Everyone knows the story of the tortoise and the hare. For it has been told for many years. In “The Tortoise and the Hare”, the hare mocks the slow-moving tortoise or turtle for being a slow-moving turtle so to speak. The tortoise takes on the challenge of racing the hare and announces that he would win the race because of his determination, not his speed. The hare finds this quite humorous and accepts the challenge. After the race begins, the tortoise plods along determinedly and the hare runs off ahead.

Don't use plagiarized sources. Get your custom essay on
“ The Tortoise and the Hare ”
Get custom paper
NEW! smart matching with writer

He gets so far ahead of the tortoise; he decides to take a nap. The hare falls asleep too long and awakes to the tortoise crossing the finish line. As in several other fables by Aesop, there is a moral certainty about the lesson it is teaching.

In the fable “The Tortoise and the Hare”, the writers’ concentration isn’t on the Tortoise’s confident in taking on a bully such as the Hare, but emphasizes the foolishness of the Hare’s over-confidence.

Growing up hearing this story, I now realize that many people have good natural abilities in which they are ruined by self-destruction. We underestimate others abilities in regards to race, size, and status; not knowing what our opponent is capable of. Just as in “The Tortoise and the Hare”, the hare from the start is confident of his ability to defeat the tortoise because of his characteristics and abilities.

Thinking his hasting would cause him to get ahead, the hare finds himself behind.

A wise man once told me “haste makes waste” and in this case it is true. I believe this is a possible moral to the story along with others. As a kid, I was led to believe the moral to the story is “slowly and steady wins the race”. I think this moral is completely foolishness. Rarely does going slow win any races, but is a good way to be careful. However, that is not what races are about. This particular moral would not be effective in guiding an individual’s actions or beliefs. In regards to races, I don’t believe being slow and steady would lead to success.

As I mentioned, “The Tortoise and the Hare”: is not about the tortoise at all, but about the hare. As a child, all the focus was on the tortoise because of pity. Everyone felt sorry that he would take on such a challenge, knowing that the hare is faster. However, we were amazed about his determination, which put the main focus on the tortoise. Indeed in any race, the hare would definitely win. The hare makes a big mistake, by being over-confident in his ability. If the hare would have been smart about the situation and ran quickly to the end, the tortoise would have looked relatively foolish.

The hare would have then shown his advanced speed. I think the better moral to the narrative is “Success depends on using your talents, not just having them”. The reader or listener should capture that you should use your skills to actually win competitions or get ahead. Overconfidence only leads to carelessness which is often punished by failure. For example a person who is constantly told that they are smart or the smartest overall, may slack off due to everyone acknowledging their capabilities. In result to this, their grades or performance could lack from often being told of this. I think we could have all acquired better wisdom from this narrative if the proper moral was give or emphasized.

In conclusion, I believe the value of narratives grounds us in the reality of the present and vividly paints the reality of the past. Communicating through a lesson in story format, whether it’s in oral or written form is more beneficial to its readers and listeners. It allows us to get into character and apply it to our experiences rather than having a set of rules to follow. It also gives a better understanding of the moral within the narrative, which provides a vital lesson. Some narratives may have more than one moral, however through written or oral format this would allow readers to relate to the characters and find the moral more beneficial to their lives. If we learn anything from the tortoise in the narrative “The Hare and the Tortoise”, it should be that when you are faced with an opponent who may certainly defeat you, the only hope you have is that he defeats himself.

The Tortoise and the Hare. (2017, Jan 25). Retrieved from https://studymoose.com/the-tortoise-and-the-hare-essay 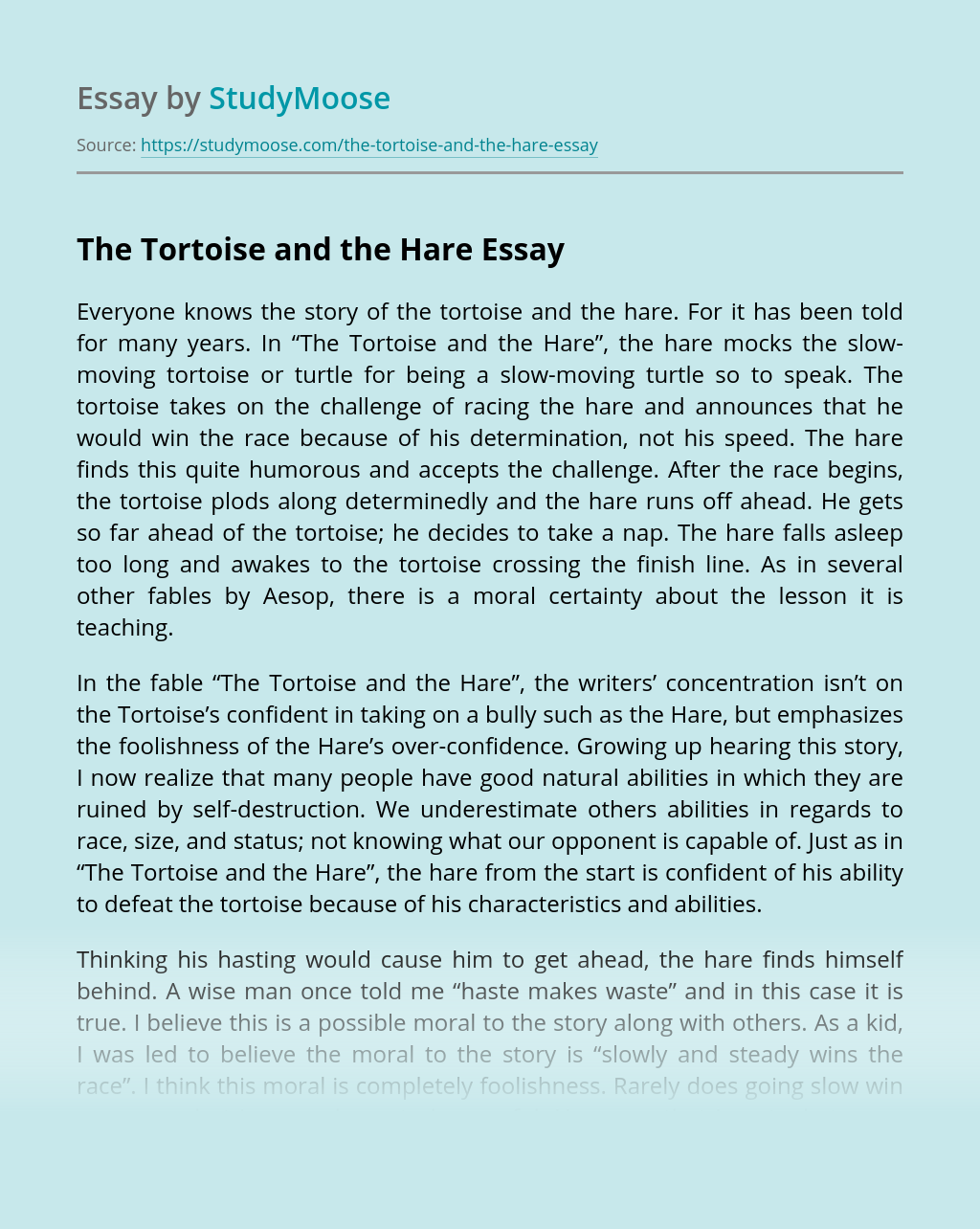