Throughout The Tipping Point, Malcolm Gladwell explains to his reader his ideas about drastic changes in society, and how they seem to occur so rapidly. In this particular selection, Gladwell emphasizes the purpose of “connectors”, saying that they have a “special gift for bringing the world together (page 38)”. Gladwell states that part of the reason information or trends spread like wildfire is the presence of a specific group of people. They are called “connecters”, and they are people who know, or are connected to, people of “different worlds (page 51)”, and bring them together.

Don't use plagiarized sources. Get your custom essay on
“ The Tipping Point: Rhetorical Analysis ”
Get custom paper
NEW! smart matching with writer

In his book, The Tipping Point, Gladwell uses different forms of persuasion, rhetorical questions, and organization to demonstrate to readers his theory on “epidemics” and how they spread. The purpose of The Tipping Point is to convince readers that, in the case of an “epidemic”, little things can make a big difference. One of the reasons Gladwell’s theory about tipping points is so impactful is because he uses persuasion techniques, such as ethos, to influence the reader’s opinions.

In this selection, Gladwell utilizes ethos to improve his credibility, and convince the reader that what he is saying is trustworthy. Gladwell uses a personal example to prove his point on the existence of a special group of people known as connectors. He writes, “There is an easy way to explore this idea (page 37)”, and goes on explaining how each friend of his is connected to the next. He adds credibility to his statements by making the connections specific, “whom I met when her friend Katie brought her to a restaurant where I was having dinner one night”.

In his example, he not only lists which friend is connected to whom, but he describes how he knows each one. Gladwell successfully utilizes methods of persuasion to convince the reader to believe what he has to say. Not only does the author persuade readers to agree with him, but he peaks their curiosity to actually make them interested in what he has to say. Gladwell adds rhetorical questions to this selection to introduce the information he will discuss by making the reader curious about it to begin with.

He asks, “How are human beings connected? Do we all belong to separate worlds, operating simultaneously but autonomously, so that the links between any two people, anywhere in the world are few and distant? Or are we all bound up together in a grand, interlocking web? (Page 34)” Gladwell doesn’t actually expect readers to come up with an answer, but he does realize that readers wouldn’t consider these questions had he not put the questions in their heads to start with. By doing this he allows his audience to form their own opinions on the questions asked before he reveals what answers the questions were originally designed to expose. Gladwell effectively uses rhetorical questions to get the audience interested early on, therefore making the information given in the selection more important. Finally, Malcolm Gladwell appropriately organizes this section to best get his message about connectors and their impact across to the reader. This selection is designated to an explanation on what makes someone a “connector”, and what it is they can do that is so important. He starts off with a few questions to introduce the information in the selection, and then moves on to give a factual example. He lists the name of the man who conducted the experiment, Stanley Milgram, the amount of people he used, 160 people, and explains what happened and its results. Milgram used a variety of different people to explain the “6 degrees of separation (page 36)”, and how any given person can link to another in just six small steps. This example’s purpose is to use facts to support Gladwell’s theory on the existence of connectors. Immediately following the experiment on the 6 degrees of separation, Gladwell gives a personal example, relating his idea to his own personal experiences. He explains how any one of his friends can connect to the same person in just 6 steps, which also supports Milgram’s experiment. Lastly, Gladwell concludes his idea by relating back to the questions, and stating one last definition of a connector, “people with a special gift for bringing the world together”. In his novel, The Tipping Point, Gladwell strives to convey to his audience that a small action can create an epidemic. A major supporting point to this idea is that there are certain types of people that can make this happen. One of those types is called a connector, or someone who is familiar with many different people in different areas, or “worlds (page 51)”. In this selection, Gladwell utilizes persuasion techniques, rhetorical questions, and proper organization to not only make his point clear, but to influence his audience to agree with him. 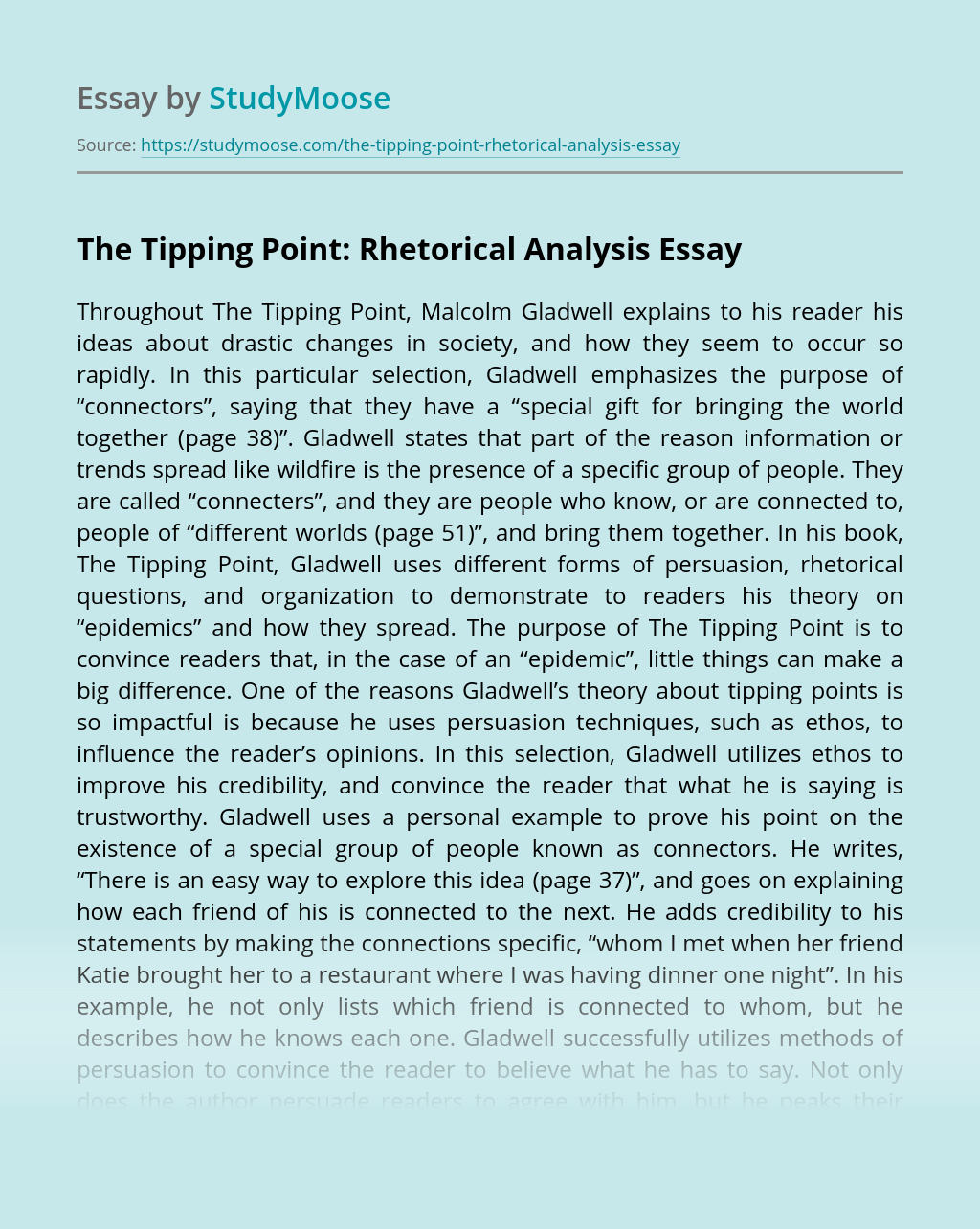