The Theme Of Shakespeare's Sonnet 30

In Shakespeare’s Sonnet 30, he uses a wide variety of poetic devices to help communicate the theme of the poem.

The major theme that I feel the author is trying to convey is one of remembrance, mourning for a lost loved one. One of the more obvious devices used is the Metrical Pattern of the Iambic Pentameter. This is a major staple of the Shakespeare Sonnet, and commonly found in nearly every sonnet that he has written. In this essay we will focus on only two major devices that were used, and how they tie into the overall theme of the poem. The first apparatus that will be discussed is the use of imagery to show the thoughts that are going through the mind of the subject.

The other major device that will be discussed is the use of alliteration at the start of the poem to set the mood of the character. The use of these devices leads this reader to believe that Shakespeare intended a theme of grief to be portrayed.

There are many references in the poem to happenings of the past, and the effect they had on the subject’s mental state. The tone of the poem is very soft, and illustrates feelings of remembrance and the regret caused by these memories. This is shown in many ways, but mainly through images pertaining to death. But the major theme of the poem is grief, and feelings of mourning shown by the subject toward the deceased.

The first major device used in the poem is imagery.

It comes up in many different forms YOST 2 throughout the poem, but it is perhaps the most pertinent in the form of a metaphor. The metaphor compares their memories together to the emptiness that the subject believes will be felt because of the passing of this person. It is a sustained metaphor that begins at the start of the poem, and carries all the way to the 12th line. There are many statements within the metaphor that express the grief that is being felt by the subject. The lines “I summon up remembrance of things past, I sigh the lack of many a thing sought.” (lines two, and three) tell us early in the poem what the subject is currently feeling. The subject is desperately trying to remember things that happened throughout their lives together, but to no avail. It seems that of all the memories that can be summoned, there is only a feeling of regret for things gone wrong.

This is the major set up line for the metaphor, and is a great example of how the tone of the poem is set. Since this quote takes place so early in the poem, it leads one to believe that the purpose of the line is to let the reader know the main focus of the poem. The theme of grief comes to attention several times during the use of the sustained metaphor. The second time it comes up, is in lines nine, ten, eleven, and twelve “The can I grieve at grievances forgone, And heavily from woe to woe tell o’er The sad account of fore-bemoaned moan, Which I knew pay as if not paid before.” These lines play a large role in portraying the theme of grief. It is showing how the subject is remembering all of the painful things that went on within the time that was spent together by these individuals. It also talks about memories of the things that went unevolved, and how hard it is to cope living with these things haunting the mind of the subject.

YOST 3 The next appliance that was a large piece of the sonnet was the use of alliteration early in the poem, and sets the mood. In the first four lines of the poem, the sound of the letter “s’ is very predominately used. “When to the sessions of sweet silence thought, I summon up remembrance of things past, I sigh the lack of many a thing sought, And with old woes new wail my dear time’s waste” There are many powerful words within those four lines that contain the “s’ sound. They all serve the purpose of helping describe the feelings, and thoughts racing through the head of the poem’s subject. Specifically, the words “summon, remembrance, and past” let on that the subject is thinking back to happenings that occurred prior to this event. This leads us to the theme of remembrance, and how the subject is currently dealing with it. The words ” sigh, sought, and time’s waste” show that the subject does not feel that the time spent was not put to the best possible use. This is a good example of the theme of regret by telling us outright that the subject is not happy with the way the past went.

During the coarse of the poem, Shakespeare used many different examples of poetic devices to communicate his intended themes upon the reader. I feel that these themes were very well represented in many different aspects, by a seasoned veteran of this profession. The uses of imagery and devices of sound seemed to be the choice apparatuses of the author, and were very successful in getting the intended point across. Also, the uses of devices of sound (specifically alliteration) were very effective at illustrating the tone of the poem to the reader.

YOST 4 The sustained metaphor was very effective because it was a solid constant from beginning to end, and emphasized the theme aspect of the poem very well. The metaphor carried from the second line to the twelfth line, and led into the final two lines which summed the poem up nicely. Shakespeare was delightful in capturing the feelings of remembrance and mourning, but did an even more brilliant job of showing one’s ability to move on. It’s strange how the memories of crying makes you laugh, and the memories of laughing cause you to cry.

The Theme Of Shakespeare's Sonnet 30. (2016, Jul 09). Retrieved from http://studymoose.com/the-theme-of-shakespeares-sonnet-30-essay 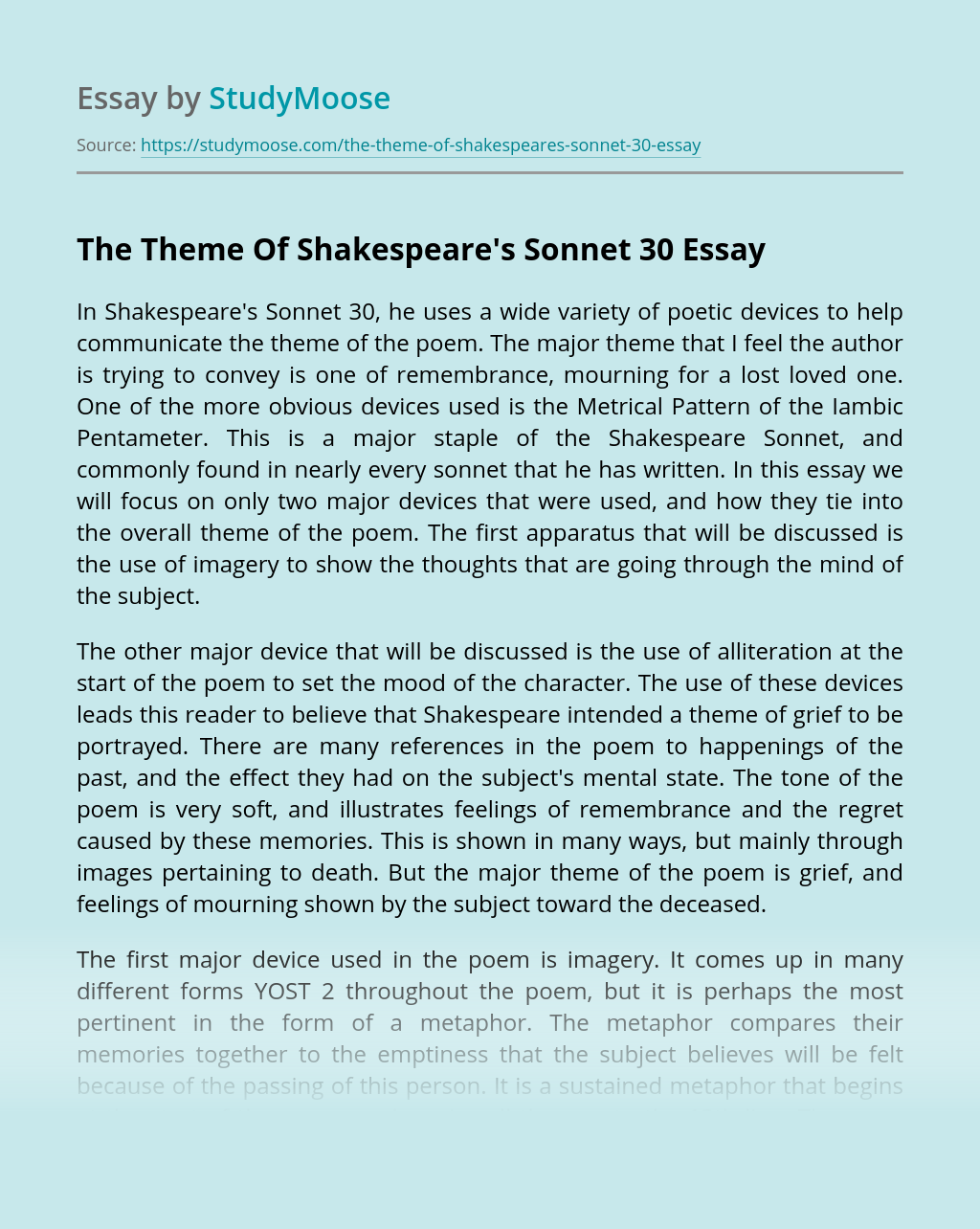 Don’t waste time
Get a verified writer to help you with The Theme Of Shakespeare’s Sonnet 30
Hire verified writer
$35.80 for a 2-page paper
Stay Safe, Stay Original