The text is talking about two friends called Joe Simpson and Simon Yates, 1985. Their goal was to reach the crest of Siula Grande, people have tried to but no one has ever achieved it. This true story has happened in the mid-80’s, 1985 to be exact. The text includes what happened, and the hard life changing choice that Simon took. This text is rich in many figurative language, vivid words, senses, and other devices that helped the reader interact and feel like being there with them on the top of the mountain.

Don't use plagiarized sources. Get your custom essay on
“ The text is talking about two friends called Joe Simpson and Simon ”
Get custom paper
NEW! smart matching with writer

I personally find the way the text has ended made it exciting- which was hyperbole in the last sentence and before the end with some sentences-and made the reader think about the situation even after reading. Most of the readers imagined themselves actually there and everyone had a thought what would I do if I was in Simon’s shoes?

The text included many figurative languages. One of them presented was personification.

‘Letting my mind run haphazardly.’ The personification here is for the mind giving the mind human traits. The trait is running haphazardly, which is unplanned, random, or aimlessly. So Simon means that his mind went crazy, or as with the personification, his mind ran randomly aimlessly. Alliteration too, was there in the text. ‘With water glistening’. Anyone who knows what alliteration is would definitely notice this sentence as presented here. Hyperbole is another figurative language which was presented more than once in the text. I will only refer to two only.

The first example is ‘I found that I had no strength’. He said that after saying ‘when loose rocks slipped suddenly under my feet, I found that I had no strength’. So what the reader should understand here is that he was so tired that when the rocks under him slipped, and he was too tired to do anything about it. He didn’t mean the literal meaning of having no strength. Another example of hyperbole and that was at the end of the text and that I really liked. ‘There seemed no end’. He meant that he drank a lot since he was so thirsty, he felt that he was drinking forever. I wrote a lot about figurative language but I wanted to talk about most of them. Connotative phrases, it was like most of the ones I talked about was presented twice or more. One example was ‘tantalizing slowness’, ‘I crouched at the rock drinking and waiting, and drinking again’.

The text is talking about two friends called Joe Simpson and Simon. (2019, Dec 01). Retrieved from https://studymoose.com/the-text-is-talking-about-two-friends-called-joe-simpson-and-simon-example-essay 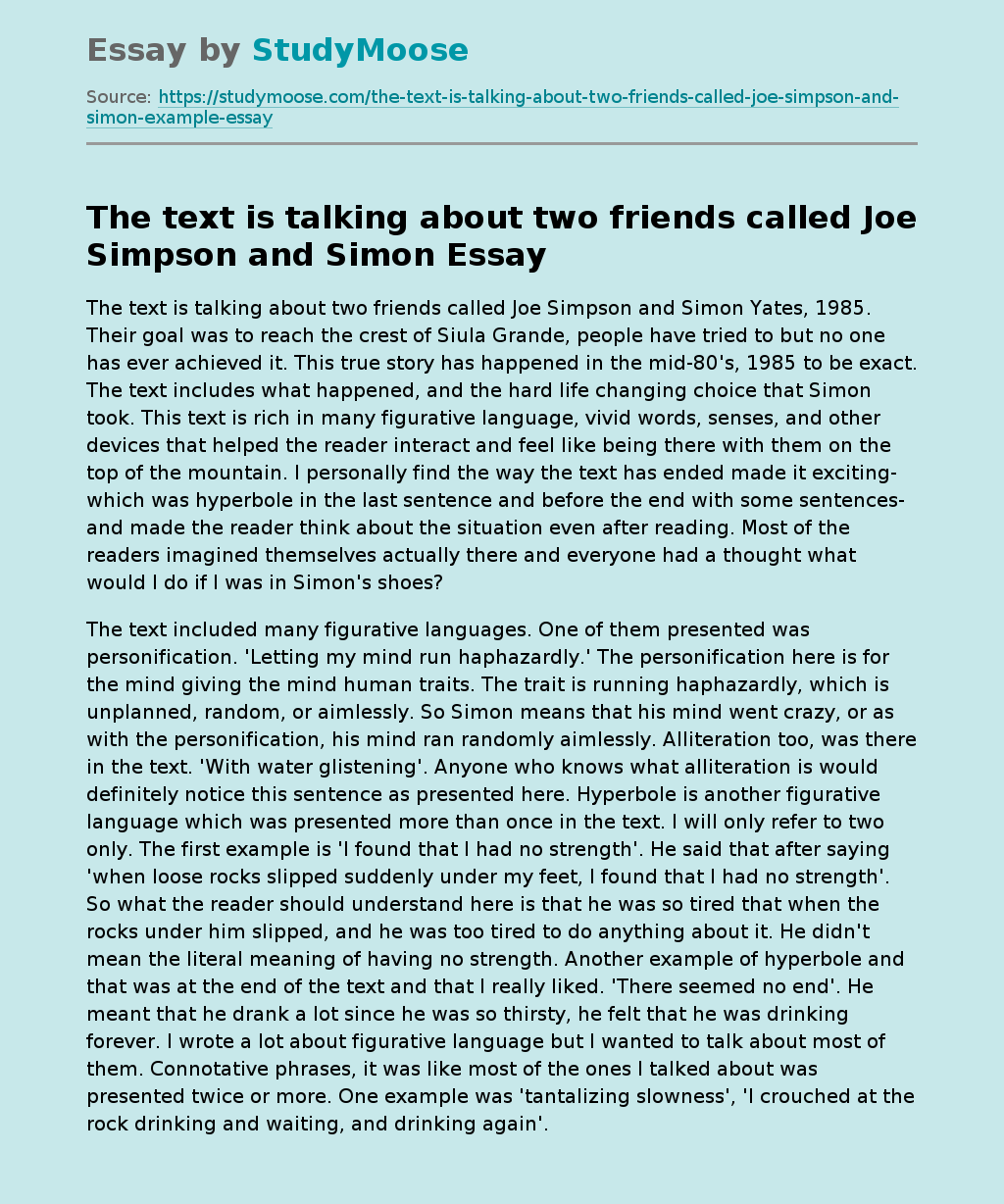