The System and Social Structure of Feudalism

What is civilization? Aristotle once said: “I know what it is but when I turn to write it down, it eludes me. ” Civilization (Lat. civis – a town dweller) – The term emerged during the Enlightenment (around the eighteenth century) when it referred to an achieved state which could be contrasted with barbarism. It refers to a society viewed in an advanced state of social development (e. g. , with complex legal and political and religious organizations); “the people slowly progressed from barbarism to civilization.

Don't use plagiarized sources. Get your custom essay on
“ The System and Social Structure of Feudalism ”
Get custom paper
NEW! smart matching with writer

Civilization describes a form of human organization (it covers a significant geographical area and lasts for a considerable period of time). Medieval and Renaissance Civilization (Western Europe – England; 5 – 17 centuries) Medieval Civilization; Periodization: Early (5 – 1000 AD), High (1000 – 1300 AD), Late Middle Ages (1300 – 1500 AD; 16th century – the beginning of the Early Modern Period, the Renaissance). The expression “Middle Ages” became common during the time of the Renaissance to refer to the period between the ancient world and the modern world.

This period was also called the Dark Ages but I don’t think that it is the best term for it. One reason is because, while there were times of comparative darkness, there were also great times of light, progress, and learning. It is not accurate or appropriate to label the whole period the Dark Ages, even though there were some dark times during that 1,000-year period. The Early Middle Ages is a period in the history of Europe following the fall of the Western Roman Empire which formally ceased to exist in 476.

However, that date is not important in itself, since the Western Roman Empire had been very weak for some time, while Roman culture was to survive at least in Italy for yet a few decades or more. The Early Middle Ages lasted for almost 5 centuries from about AD 500 to 1000. This was a period characterized by shifting polities (polity = a form of government of a state, society), a relatively low level of economic activity, and successful incursions by non-Christian peoples Huns, Germanic peoples, Arabs, Vikings and others : the Migration period, the Ostrogoths and Visigoths, the Merovingians.

It’s the period of the Anglo-Saxon England, the Frankish Empire and the Viking Age. There were then many competing tribes and feudal units. However, after the fall of Rome, there was one unifying factor. The only thing that held society together was Christianity. Christianity had spread beyond the cultural bounds of the Roman Empire into barbarian Europe just in time so that when Rome fell, Christianity did not fall with it. Christianity was already the religion of many of the barbarians who were invading the Roman Empire.

Kenneth Clark said in his book Civilization, “If you had asked the average man of the time to what country he belonged, he would not have understood you. But he would have known what bishopric (= the diocese of a bishop) he belonged to. ” The idea of belonging to England or France or Germany would not have been a thought of someone of that time. The unifying factor in all of the confusion of the Middle Ages was Christianity. While the Roman Empire no longer existed, modern Europe had not yet emerged either.

England, Italy, France, and Germany were not on the map yet. Europe was divided into barbarian kingdoms and since these barbarians were nomads, as they moved, they encroached on someone else’s territory (intruded on someone’s rights on a piece of land) and in turn forced those people to move. Within the larger areas controlled by various barbarian peoples, smaller units gradually developed.

This is described as the time of feudalism. Larger tribal areas were subdivided into small areas, and even smaller areas, with a lord and his vassals.  The feudal system was based on mutual obligations. In exchange for military protection and other services, a lord, or landowner, granted land called a fief. The person receiving a fief was called a vassal. To visualize the structure of feudal society, think of a pyramid. At the peak reigned the king. Next came the most powerful vassals—wealthy landowners such as nobles and bishops. Serving beneath these vassals were knights.

Knights were mounted warriors who pledged to defend their lords’ lands in exchange for fiefs (provide military service which amounted to forty days’ service each year in times of peace or indefinite service in times of war; in the late medieval period, this military service was often abandoned in preference for cash payment or an agreement to provide a certain number of men-at-arms or mounted knights for the lord’s use – mercenary knights. ). At the base of the pyramid were landless peasants who toiled in the fields. In practice, the feudal system did not work so simply.

Relationships between various lords and their vassals were never clear-cut. Sometimes feudal arrangements and agreements were quite complicated. It was not unusual for a person to be a vassal to two or more lords at the same time. Having received a fief from each, he was therefore obligated to serve both. This posed no problem unless his two overlords went to war against each other! Sometimes the vassal’s contract would say what he was to do. For example, he might have to fight for one lord but send a number of his knights to fight on the other side!

The feudal pyramid often became a complex tangle of conflicting loyalties. A vassal had responsibilities other than to serve his lord in battle. He also had to sit on the lord’s court, where he might judge the guilt or innocence of another vassal. If his lord stopped by for a visit, the vassal had to provide food and shelter for his superior and all of his party. Not the least of the vassal’s promises was to help pay the ransom demanded when his lord was unfortunate enough to get himself captured by an enemy.

Central to the feudal system was the ritual of homage which consisted of several formalized gestures that were performed in public by the aspiring vassal who kneeled in front of his future lord. The ritual included: the public declamatio of the vassal’s wilful subordination to his lord, the clasping of paired hands (immixtio manum), the kiss of friendship (osculum), the solemn oath sworn on relics or on the Bible, the investiture of the fief and handing of a symbolic object as a token of granting possession of land, all these ritualized gestures pointing to a personal, intimate bonding between lord and vassal.

So, as you can see the tie between lord and vassal was traditionally established on a deeply personal basis: man to man (the vassal was the “man” of his lord), hand to hand (the vassal placed his hands between those of his lord), and face to face (the ceremony of homage was sealed with a kiss of peace).

The System and Social Structure of Feudalism. (2016, Oct 05). Retrieved from https://studymoose.com/the-system-and-social-structure-of-feudalism-essay 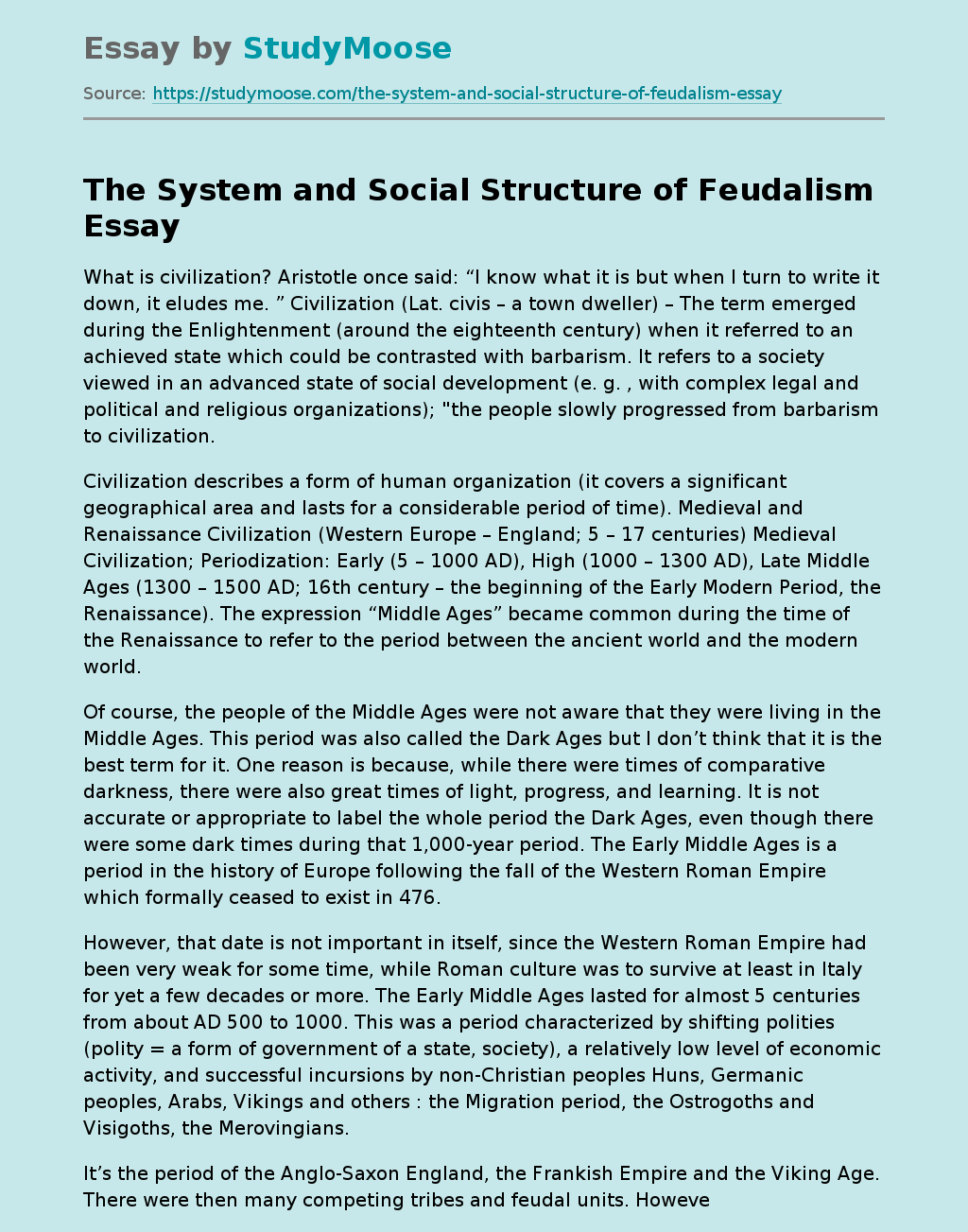