The Symposium By Plato

This started with the introduction of a character, a man namely, Apollodorus of Phalerum. While traveling in a city, Apollodorus encountered an unnamed acquaintance and asked him about the famous story of a drinking party called the “Symposium”. This party involves Socrates and his other followers. Although Apollodorus did not really attended the said event, he agrees on telling his companion the happenings and the interaction that happened in the event via the stories told to him by Aristodemus, one of Socrates friends and guests at the drinking party.

Don't use plagiarized sources. Get your custom essay on
“ The Symposium By Plato ”
Get custom paper
NEW! smart matching with writer

The narrator of the dialogue, although not really attended the party.

A wealthy businessman that came from Phalerum.

He’s only a child when the party happened and told the happenings in the party via the story of Aristodemus.

“Well, the tale of love was on this wise- But perhaps I had better begin at the beginning, and endeavor to give you the exact words of Aristodemus.

Guest at the drinking party or the Symposium.

He observed that Socrates is always lost in thought and is easily distracted.

“Let him alone, he has a way of stopping anywhere and losing himself without any reason. I believe that he will soon appear; do not therefore disturb him.”

Phaedrus takes part in several Platonic dialogues, that includes the ‘Phaedrus’ which is titled on his own name. “Lover of Literature.”

He is depicted in the dialogue as a young, intelligent and handsome man.

He is the one to propose in the party that the attendants should talk and make speeches about ‘love’.

“Eros is a mighty god, and wonderful among gods and men, but especially wonderful in his birth.”

He talked about on how love affects and motivates people that are under the influence of it.

“Eros will make men dare to die for their beloved love alone; and women as well as men.”

He made Achilles as an example of this statement as he killed Hector as a form of revenge for the death of Patroclus, his best friend on whom he loved so much.

Known as the “Lover of Agathon.”

“Phaedrus, the argument has not been set before us, I think, quite in the right form; we should not be called upon to praise Eros in such an indiscriminate manner. If there were only one Eros, then what you said would be well enough; but since there are more gods of Love than one, we should have begun by determining which of them was to be the theme of our praises.”

He argues that there are Two gods of love one being Eros (Desire) and one being Aphrodite (Heavenly or Maiden).

“Such is the entire liberty which gods and men have allowed the lover, according to the custom which prevails in our part of the world. From this point of view a man fairly argues that in Athens to love and to be loved is held to be a very honourable thing.”

A doctor/physician and a follower of Socrates.

“For harmony is symphony, and symphony is an agreement; but an agreement of disagreements while they disagree there cannot be; you cannot harmonize which disagrees.”

For him, great love advances balance and deliberateness. Love doesn’t limit itself to human connection and relationship, yet can be found in music, drug, and other things.

A poet, playwright and is considered as one of the best comedic poet of the ancient period. Despite having a issue with Socrates, he is portrayed as a friend and as a guest at the Symposium.

“The sexes were not two as they are now, but originally three in number; there was man, woman, and the union of the two, having a name corresponding to this double nature, which had once a real existence, but is now lost, and the word ‘Androgynous.'”

He referenced something that is towards a fantasy that recommends that we were previously different and twice as we are currently, yet that our danger to the divine beings provoked Zeus to slice us down the middle. From that point onward, we have meandered the earth searching for our other half so as to rejoin with it and become one once again.

An Athenian poet. He is known for his tragic poems and his first tragedy won a prize which eventually started the whole drinking party.

“I would rather praise the god first, and then speak of his gifts; this is always the right way of praising everything.”

He defined love as something that is pretty, beautiful, and youthful. He also said that love is the root of all virtues inside a human person.

The main protagonist of the dialogue. Known as the father of western Philosophy and one of the most prominent figures in history.

“And now, taking my leave of you, I would rehearse a tale of love which I heard from Diotima of Mantineia, a woman wise in this and in many other kinds of knowledge, who in the days of old, when the Athenians offered sacrifice before the coming of the plague, delayed the disease ten years.”

He relates love according to the words that was told to him by Diotima, that love is not absolute nor a god, but rather something or a spirit that connects people and things of their desire.

A statesman or a politician and also a friend of Socrates.

He was late in the party and was immediately entertained by Agathon.

He tries to seduce Socrates, but Socrates showed no interest at all.

The party ended up in a mess as everyone is drunk. They ended up talking about ‘love’ as the sun shows up.

SUMMARY OF THE SYMPOSIUM

Showed in the dialogue, the ‘Symposium’ is a party held in honor of Agathon accepting a prize towards his first tragedy. It started with Apollodorus agreeing to talk about the drinking party on which he never attended to a companion of his.

The guests at the symposium are Aristodemus, Phaedrus, Pausanias, Eryximachus, Agathon, Aristophanes and Alcibiades. This drinking party eventually lead to a series of speeches about love as suggested by Phaedrus.

Each guest gave their speeches and their own ideas on what and who love is. Phaedrus said that Eros is the most beautiful and heavenly god that exists. Pausanias said that love is divided into two Eros (Desire) and Aphrodite (Heavenly). Erixymachus told them that love is present not only through people but also through music, art and other things as it is omnipresent. He also added that the best ingredient of love is none other than harmony. Aristophanes expressed that humans were previously divided into three sexes: Man, Woman, and the Androgynous, and now that Zeus sliced down humans in half cutting the Androgynous, humans should begin looking for their other half (true love) and if they do, the gods will reward them handsomely.

Agathon started his speech by defining love as beautiful and the root of all virtues that inhibits a human person. Nevertheless, Socrates began his speech for love as a reference to a woman that he met before (Diotima), telling them that love is neither ugly or beautiful, good or bad, but rather something that we should reach not solely by finding your partner or the ‘other half’ but rather by following the ‘ladder of love’; something that is not expressed solely by sexual relation, and if by any chance a person followed this he/she will be seeing and witnessing its purest form.

Lastly, Alcibiades came in late to the banquet. While drunk, he constantly seduced Socrates as he expressed his love for him, but it did not end to a success.

The Symposium By Plato. (2019, Dec 01). Retrieved from https://studymoose.com/the-symposium-by-plato-essay 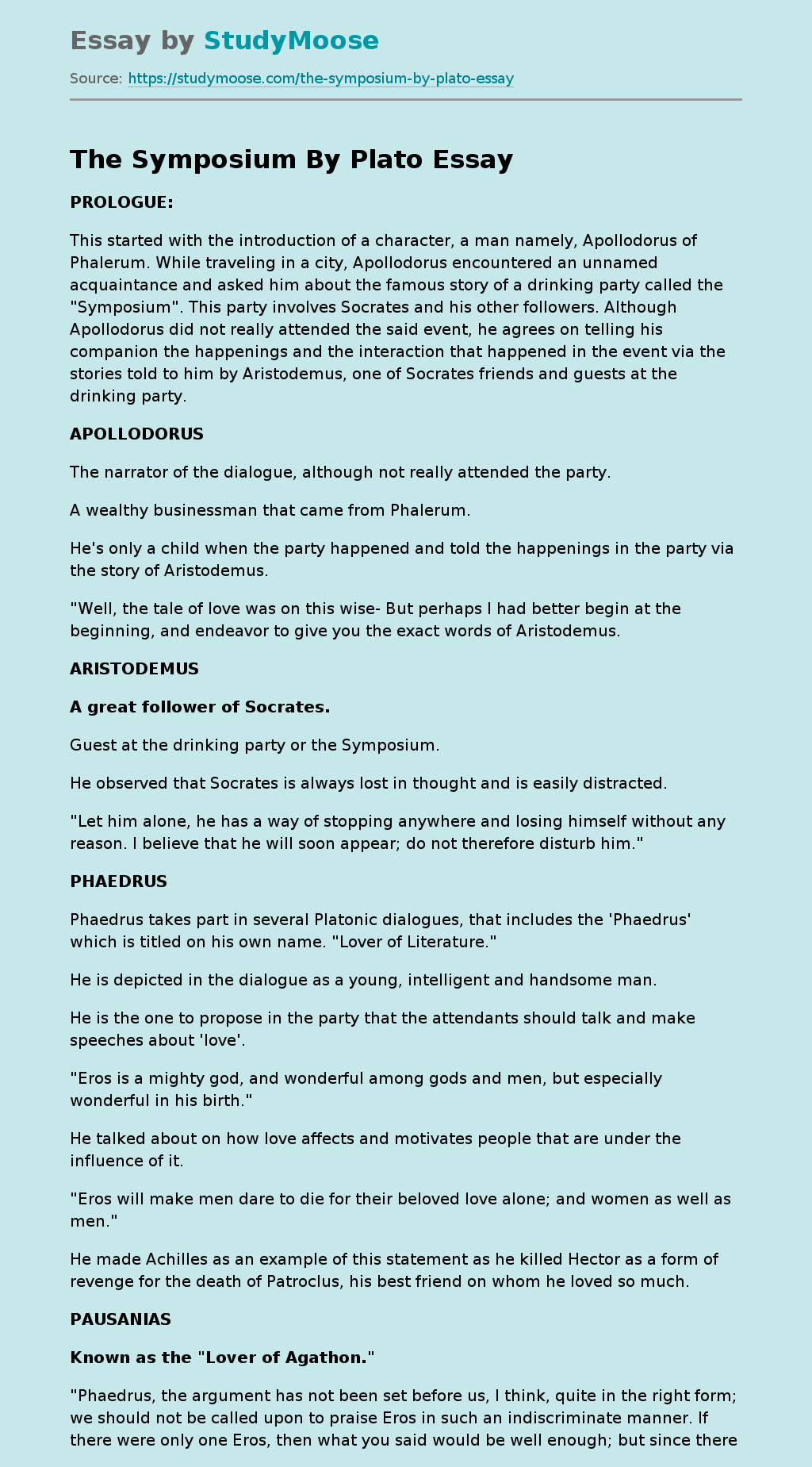