The Strengths and Weaknesses of Virtue Ethics

The virtue ethicist suggests that this theory avoids the complicated tasks of using a formula to figure out what we should do, by instead focusing on the kinds of persons we sould be. The problem lies in determining how we know what kinds of persons we should be. How are we to determine just what the virtues are? If we don’t know what the virtues are, then telling people to live virtuously would be ignorant. The virtues are whatever character traits enable us to live at the heights of excellence.

Don't use plagiarized sources.
Get Your Custom Essay on The Strengths and Weaknesses of Virtue Ethics Just from $13,9/Page

Aristotle suggests this theory too. However, identifying the “flourishing life” is itself a major task. Also, if we look very closely at the notion of a “flourishing life,” we will find that instead of helping us determine what the virtues are, it actually begs the question, since the flourishing life already contains value judgments.

By which should live our lives? What kind of person should we be? If we asked the virtue ethicist, he would say to live in accordance with the virtues.

If we then ask what the virtues are, we possible would be told that we can determine that by appealing to this notion of a flourishing life–only it turns out that the flourishing life assumes a set of values, a set of standards already.

In spite of all these criticisms and problems that can be found, there are also a good number of strengths. Virtue theorists have noticed a couple things about human experience that are well worth observing. In the first place, they have understood the need to distinguish good people from legalists. Just because someone follows rules does not mean he is a good person. Good people act from proper motives and they desire the good life. But theories like utilitarianism tell us next to nothing about how to form these motives and desires. The virtue theorists at least talk about this important subject. Virtue theorists noticed long ago that the world works in an amusing way. When we do good things, even when we don’t want to, the very act of doing the good thing often changes our desires so that by the end of the action, we begin to form an attraction to it.

Virtue theory offers a great deal to moral psychology. We can learn moral principles from it. Virtue ethics is less a normative theory of what we should to do than a descriptive account of the limits and capabilities of human beings. If humans are creatures that tend toward habituation, then moral educators would do well to heed this fact in developing a moral curriculum. Then it also raises questions about whether calling virtue theory “ethics” is even appropriate. Since virtue theories fail to offer defensible moral norms that are distinguishable from their normative rivals, virtue theories are not really ethical theories at all.

The Strengths and Weaknesses of Virtue Ethics. (2016, Jun 08). Retrieved from https://studymoose.com/the-strengths-and-weaknesses-of-virtue-ethics-essay 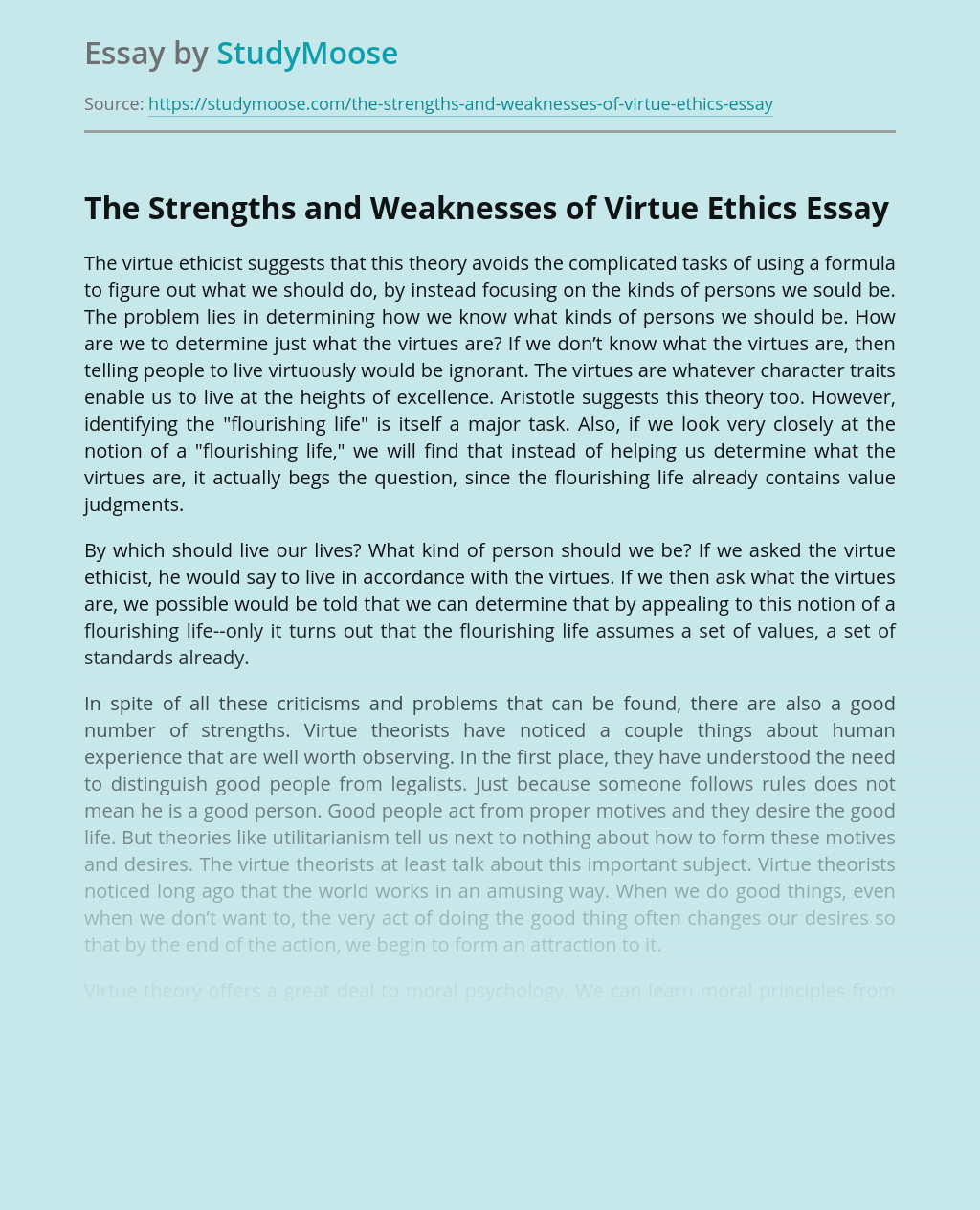 Regardless if anyone understands it or not, everybody actually lives in accordance with some sort of ethical standard. Some may describe it as a code, a creed, or perhaps a motto; however ethics itself is specified as a set of moral principles or worths (Meriam-Webster). Principles is a very crucial element of society in basic...

View sample
Beliefs in the sanctity of life

Explain how beliefs in sanctity of life may influence ethical approaches to abortion This issue involves the principles associated with abortion and involves the consideration of the act of killing and the ethical questions that this raises. The belief that life is in some way sacred or holy is widely supported throughout several different cultures...

View sample
Get Essay
Most Dangerous Game with the Lottery

The Most Dangerous Game, by Richard Connell and The Lottery, by Shirley Jackson portray the common theme that people remain indifferent to cruelty until they are the recipients of it. Both stories show that when the darker side of human nature centers on itself, evil prevails showing how man is innately evil and that convictions...

In the essay “The Lowest Animal” Mark Twain paints a picture sarcastically of humans being inferior to every animal except for Frenchmen. Twain exhibits his mastery of humoristic writing. There are three themes that are used throughout the essay: religion, differences between higher and lower animals, and the ability of humans to encompass morality. First,...