The Story of Keesh and the Life of Pi

In a short story named “The Story of Keesh” and a novel excerpt named “The Life of Pi” both authors, Jack London and Yann Martel, develop certain qualities in characters who find the strength in themselves to want to survive when in extreme situations. Both Keesh and Pi obtain three traits that help them survive in these extreme environments such as bravery, intelligence and strategic plans. First, an example in which Keesh uses bravery in “The Story of Keesh” shown when Keesh stated “Bok, my father, was a great hunter.

Turn in your highest-quality paper
Get a qualified writer to help you with
“ The Story of Keesh and the Life of Pi ”
Get high-quality paper
NEW! AI matching with writers

I, too, his son, shall go and hunt the meat that I eat.” This showed a sign of bravery because it was known that Bok died from hunting a polar bear knowing Bok was one of the strongest and most superior hunters. Therefore, although knowing that one of the greatest hunters died from hunting, Keesh was brave enough to hunt at only thirteen years of age. However, the character Pi in “The Life of Pi” was brave as explained through the quote “And so I pushed aside all thoughts of Richard Parker and fearlessly went exploring for fresh water.

” This explains how Pi no longer feared the tiger, Richard Parker.

At that moment he was only determined to find water even if he had to risk being seen or eaten by the tiger to move around the boat. This was important in order for Pi to survive because Pi needed water to live considering he was slowly reaching his death. Second, it was proven that the character Pi from “The Life of Pi” was very intelligent surviving on a boat with a tiger.

This was shown through the quote “the whole package disappeared in a few minutes, wrapping paper flying away in the wind. I considered opening another carton, but I thought better.” This quote explains how Pi finally found food on the boat but he was smart enough to save the rest of the food for later when he was further hungrier to receive more energy for survival. Instead, Pi could’ve devoured it all in one moment but he chose not to. “The Story of Keesh” is similar because the quote, “Bok, my father, was a great hunter. I too, his son shall go hunt the meat that I eat” also shows how Keesh was intelligent enough to realize that he wasn’t going to let his mother and him live off of the poor meat that to council gives them.

Therefore, he will go out and hunt his own. This was intelligent to his survival because Keesh and Ikeega wouldn’t be able to survive off of the small portions of meat they were receiving. The last comparison which Pi from “The Story of Keesh” shows is that they are both strategic. In “The Life of Pi’ is stated, “don’t I have here a perfect circus ring, inescapably round, without a single corner for him to hide in? I looked down at the sea. Wasn’t this an ideal source of threats with which I condition him to obey? I noticed a whistle hanging from one of the life jackets. Wouldn’t this make a good whip to keep him in line?” This explains how Pi has a strategy in which he will use several utilities to tame Richard Parker, the tiger, in order to survive with him on the boat. He would use the whistle to control his actions, the boat was round therefore the tiger couldn’t hide, and the sharks in the ocean would be a great threat enough to scare Richard Parker.

On the other hand, Keesh was strategic by using blubber balls to hunt. He explains what it does and how to make it by stating, “One takes a small chunk of blubber, thus, and thus makes it hollow. Then into the hollow goes the whalebone. After that it is put outside where it freezes into a little round ball. The bear swallows the round ball, the blubber melts, the whalebone with its sharp ends stands out straight, the bear gets sick, and when the bear is very sick, why, you kill him with a spear.” This shows how Keesh develops a strategy in which a whalebone is placed in blubber and frozen. Then the predator eats it, the blubber ball unfreezes, the predator gets sick, and you kill it. This blubber ball invention was crucial to the survival of Keesh because the blubber balls helped Keesh hunt therefore without this, Keesh might’ve been killed in the process of hunting.

In conclusion, Keesh in “The Story of Keesh” and Pi in “The Life of Pi” are brave, intelligent and strategic which helps them survive in extreme environments. Keesh is brave by going hunting despise the dangers while Pi risked his life with a tiger named, Richard Parker by trying to search for water. Keesh was intelligent because he decided to hunt his own meat rather than depending on others while Pi decided to save food for himself for when he was hungrier later on instead of eating it all at once. Last, Keesh was strategic by inventing blubber balls which killed predators while Pi developed ways to tame the tiger, Richard Parker, in order to survive.

The Story of Keesh and the Life of Pi. (2016, Sep 04). Retrieved from http://studymoose.com/the-story-of-keesh-and-the-life-of-pi-essay 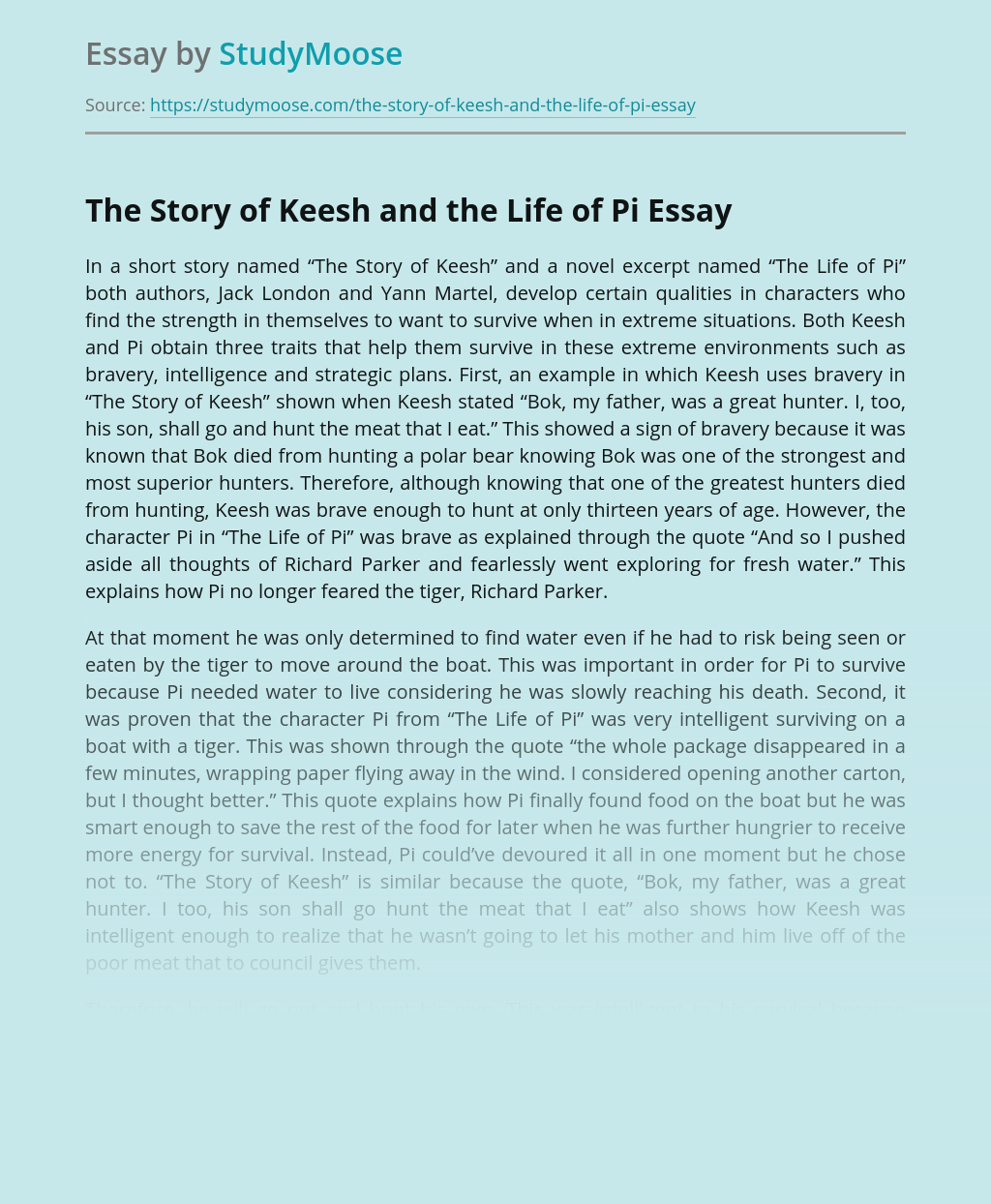 Turn in your highest-quality paper
Get a qualified writer to help you with
“ The Story of Keesh and the Life of Pi ”
Get high-quality paper
Helping students since 2015
Stay Safe, Stay Original