The Significance of Bauhaus in Architecture and Interior Design

Despite the many challenges that faced the Bauhaus, like changes in leadership, the impact of socio-political situations in the country to the school and the continued move towards change by architecture and interior design parallel to the forward movement of Bauhaus, the school managed to retain its status as being a significant and important entity in this particular field.

Don't use plagiarized sources. Get your custom essay on
“ The Significance of Bauhaus in Architecture and Interior Design ”
Get custom paper
NEW! smart matching with writer

The focus of this paper is the discussion focused on why was the Bauhaus so important to the development of modern architectural and interior design. Discussion

Bauhaus was important because it was an institution that symbolized something that it has helped lead and pioneer.

Underneath the edifice of the school is a more complex creature, especially since Bauhaus was more than just a school but a catalyst. “Bauhaus was not so much a movement as an idea. It became a gathering place, bringing together the accumulation of 20th century design concepts and disseminating these through a revolutionary educational system (Wertheimer, 2004, p. 103). ” Bauhaus is important to the development of modern architectural and interior design for many particular reasons.

The philosophies and ideas and teachings that stemmed from Bauhaus was considered by artists and designers all around the world as logical, practical, economical and ergonomic, sound, possesses sufficient aesthetic to balance with utilitarian considerations for design.

All in all, it re-shaped architectural and interior design because of the influence not just of the people that was moving under the Bauhaus banner, but also because of the impact of the ideas that originated from Bauhaus starting from the time the first Bauhaus was created (Wertheimer, 2004, p. 103). “In 1919, Walter Gropius was invited to establish the first Bauhaus in Weimar, and the result was one of the most significant movements of modern design (Wertheimer, 2004, p. 103). ” It was practical because of the result in architectural and interior design that the Bauhaus ideas espoused.

An excellent example of this is the popular Bauhaus ideal and philosophy of form following function when it comes to design in architecture and in interior design as well. For this particular philosophy/ideal, the Bauhaus puts it that architectural and interior design should consider first the functionality of the design; how the design should flow and be created in the process should not depend on artistic or aesthetic consideration but on utilitarian and functional considerations first.

Under this ideal, it is impractical to design something and create an output based on aesthetic and artistic consideration which turns out to be incapable of maximizing the object or the design’s potential for functionality and utilitarianism. Through this approach, Bauhaus accomplished the idea in architecture that is considered as catalyst for modern architecture, and that is “making art relevant to modern life (James, 2006, p. 63). ” This idea alone, which stemmed from Bauhaus, was considered by many designers as a sound approach to designing.

It was Bauhaus that influenced the designers significantly to embrace the new materials and not marginalize these new materials, allowing the growth in use of the new design materials which in turn is an important aspect in how architectural and interior design modernized to how it is today (Kleiner, 2008, p. 963). Another important reason as to why Bauhaus is important in the development of architectural and interior design is the fact that Bauhaus teaches its students and its followers on the consistent adherence to strong design principles, both old and new.

The discipline needed for the adherence is reinforced by the presence of an equally strong and rigorous curriculum that mold and shape the attitudes, tendencies, styles and approaches of designers influenced by Bauhaus. It was a curriculum that was also seriously followed, strengthening the importance of Bauhaus and its influencing the modernization of architectural and interior design (Kleiner, 2008, p. 963). “Art schools everywhere began to structure their curricula i line with the program the Bauhaus pioneered (Kleiner, 2008, p. 963).

The significance of Bauhaus’ influence on the development of architectural and interior design is reflected generally in the output – particularly on the works that reflect the Bauhaus style (Wertheimer, 2004, p. 103). One example is the Bauhaus building built in Dessau, described as “one of the most important structures of modern architecture (Wertheimer, 2004, p. 103). ” Another example is the Wassily Chair made by Marcel Breuer, described as a chair that has a “simplified geometric look, and the leather or cloth supports add to the furniture’s comfort and functionality (Kleiner, 2008, p. 963).

“These chairs could also easily be mass produced and thus epitomize the goals of the Bauhaus (Kleiner, 2008, p. 963)”, not to mention the fact that the design of the chair was already consistent to the idea of form following function by Bauhaus. Conclusion Bauhaus contributed to the growth and development of modern architectural and interior design through its ideas and philosophies that it has taught its students and followers. “Various ideological statements made at the Bauhaus about architecture continue to serve as guides to understanding modern architecture more generally (James, 2006, p. 3). “

These ideas and philosophies include the idea of less is more, the idea of form following function, the campaign for the acceptance of new materials among designers and integrating the new materials to the approach in designing as it changes over time and the strength of the school program in teaching sound and solid design foundations among its students and followers, influencing design approach. In general, influencing art per se, “Bauhaus greatly influenced art education (Gardner, Kleiner, Mamiya, 2005, p 785). These aspects were important considerations why the Bauhaus significantly influenced architectural and interior design and made its mark as this particular aspect of the society has modernized over time. Bauhaus was successful, not just because of its ideals, but more importantly, because of the people who are involved in Bauhaus and has campaigned for its ideals, particularly the leaders of Bauhaus and those who helped in teaching the ideals and philosophies of Bauhaus. Without them, Bauhaus wouldn’t have sent its ideas outward.

It wouldn’t have been able to influence architectural and interior design and not become significant in the formation of modern day architectural and interior design and what contributed in the path for this development. For example, former Bauhaus director Ludwig Mies Van Der Rohe and his works, which utilized, exemplified and contributed to the growth of the Bauhaus popularity and significance, were considered to have “had enormous influence on modern architecture (Gardner, Kleiner, Mamiya, 2005, p 785). “

The Significance of Bauhaus in Architecture and Interior Design. (2016, Sep 22). Retrieved from https://studymoose.com/the-significance-of-bauhaus-in-architecture-and-interior-design-essay 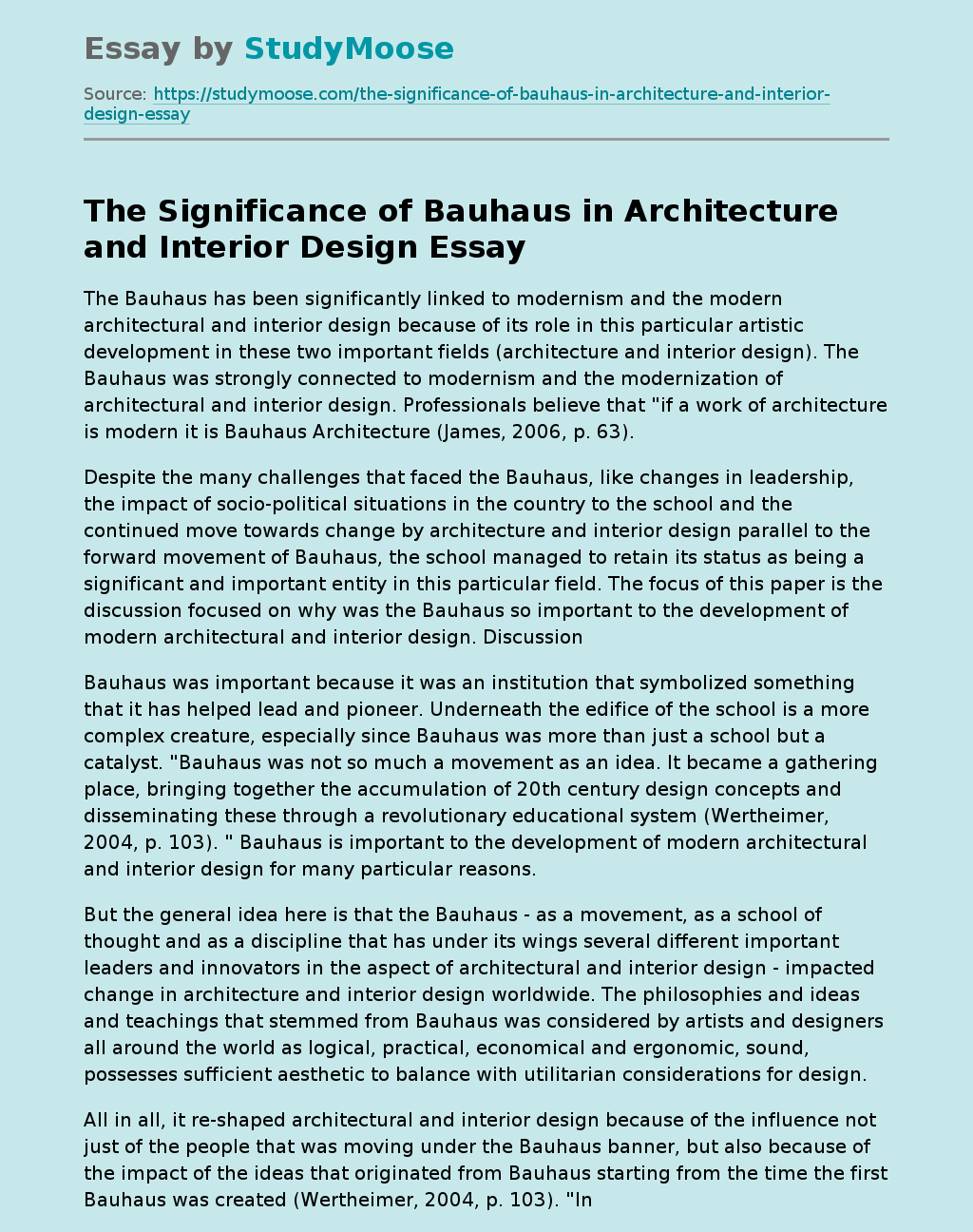