Oscar wilde ( 1854 – 1900) was born in Dublin, Ireland, the second of three childrend born to a well-known medical specialist and a prominent poetess, prose and nationalist under the pseudonym Speranza. In 1871 he enterrd Trinity College, then he went on to study the classics at Magdalen College, Oxford, England from 1874-1878. In 1881 he made a long tour of Americaa to deliver lectures on aesthetics. When thr Aesthetic Movement became popular, Oscar Wilde earned a reputation of being leader of the movement and as apostle of beauty.

In his life, there are many popular success such as: “the happy prince and other tales” (1888). “A house of pomegranates”. “Lord Arthur Savile’s crime” (1891). In all of his stories, the one gave me much more feeling is “the selfish giant”. 1. During the story the Giant and his garden changed. How and why? – At the beginning, all of us was fascinated with the perfect orchestra that exqusitely gathers sound, colors.

The giant’s garden is as a glamorous nature picture and it was such a beautiful garden that everyone wanted to live in.

As the giant came back, he set the board to prevent the child from playing there and built a high wall all around the garden, the garden after that became unrecognized. All creature simultaneously boycotted the giant. The were waving a silent revolt his selfishness. The garden was dominted by brutal and destructive forces with color of dead, gloominess, lonliness and the sound of fears “the birds didn’t care to sing…”. So it was always Winter there, and the North Wind, and the Hail, and the Frost, and the Snow danced throufh the trees because he was too selfish.

It seemed that the selfishness and unkindness of the Giant discouraged to open the gate way for evil. When the giante changed his attitude and behavior, the garden changed accordingly. The gaden became a heavenly place with color of vitality, happiness and enjoyment.

It was such a lovely scene. We can see that the giant’s heart melted and his kindess and generousness revised the dark garden. The selfish and unkind giant just received a dark garden, but the unselfish and kind giant received a garden which is paradise. It can be said that nature is a part of judge that considers who is good or who is bad in the world and anybody who is good will receive good things. – For the giant, he was a powerful and rich but he has a selfish-hearted. Ge didn’t care about the poor children, didn’t care about simple wish to play in garden, he possessed it. He built a very high wall and set up a board to keep away from children. He isolates the children and himself from the community. That’s why he has no friends to talk, no children to play with. His life was lonliness. He couldn’t blame for anyone else. We can see that withouth the children, the garden lost its beauty. In a short time, the garden turned into miserable place.

It lookes glooming, neglected. There was nothing good to the garden and the giant had to suffer all of these things. One day he realized a very big contrast in the garden as he realized his selfishness. He found that the garden needed the presentation of the children. Only with them, ther garden can be beautiful. Thes was the frist time that he had ever realized his mistakes so he determined to get his selfishness off by knocking down the wall, puttinf the notice board away, welcoming the children back to his garen. he felt that his heart melted and he was given a kiss from a boy. He completely changed himself into a kind-hearted person. The icy heart was melt. The rest of his life was full of joy and happiness. It was the children who brought the joyness and happiness ti the garden.

For example, very dear giant in his garden until he built a big wall so the kids do not play in the garden again. In addition, the giant also does not allow the children play in the garden as a giant jealous cannot play like the boys in the garden. Finally, the moral is value of friendship. Morals are shown by the little boy and The Selfish Giant. For example, the giant shared the garden with children and him very happy when he saw all flower and tree thrives . The birds came and sang on it. The little boy stretched out his to long around the giant snug and kissed him. The other for this sort of the giant was not with you there live on came running back. Conclusions, we are teaches the reader the importance of the kindness, , happiness, selfishness and friendship. When love is involved it is important to be careful in the way you treat your friends and the way your things are shared because what it is given it is going to be received. From the story, i can see that nature is a part of judge that considers who is good or who is bad in the world. Every creators have souls.

The can realize all things with their eyes and heart. Throughout the whole story, there are diffrenet judges which is indirectly and even directly determine who is bad or good guy. Jesus is one of the judges, nature is one of the judges and so the children are. Who is a good guy will be given good things. The story is also about love and selfishness. If a person have a dark soul, every thing around him will be miserable acordingly. So just open your heart. Once you have a kined-hearted, the beauty, the good things will come to you nad every things around you will be paradises. 3. Give your comment on Oscar Wilde’s style. Oscar Wilde had a phenomenal ability to incorporate aspects of both fantasy and realism into his works. Through thoughtful imagery and realistic dialect, he successfully merged two contradicting genres into a fascinatingly morbid tale. Wilde also exceled in his use of imagery. He vividly described people and situations with many types of literary devices though his favorite and therefore most frequented, is morbid imagery.

He commanded an astonishing mastery of the art of morbidity, describing in unusual detail images of corpses and blood and a murder that would rival anything in modern cinema. “He [Dorian] rushed at him [Basil], and dug the knife into the great vein that is behind the ear, crushing the man’s head down on the table, and stabbing again and again. There was a stifled groan, and the horrible sound on someone choking with blood. Three times the outstretched arms shot up convulsively, waving grotesque stiff-fingered hands in the air. He stabbed him twice more, but the man did not move. Something began to trickle on the floor. He waited for a moment, still pressing the head down. He could hear nothing, but the drip, drip on the threadbare carpet” (Wilde pg. 126). This passage describes in haunting detail a gruesome murder and paints a terrifying picture in even the most unimaginative mind.

Another style that is prevalent in Oscar Wilde’s novel, is the presence of dialogue rather than action. He prefers his characters to engage in casual conversation in a sitting room much more often than actual action. Through his writing, Wilde seems to be striving to stimulate the visual and musical arts through language primarily. Another style familiar to Oscar Wilde is his incredible talent for morbidity and evil. He had an astonishing grasp on the reality of human nature and the darkness that resides in everyone’s soul. Unlike most writers of his time, Wilde was particularly in tune with the darker side of things. He recognized the lust for immortality that is built into every human being and exemplified it in his novel. Dorian’s greed for eternal youth results in the deterioration of his soul as seen in his portrait. He had an insight into evil that few authors of his time period could claim and he mastered this insight and put it into writing with incredible ease.

The selfish giant. (2016, May 09). Retrieved from http://studymoose.com/the-selfish-giant-essay 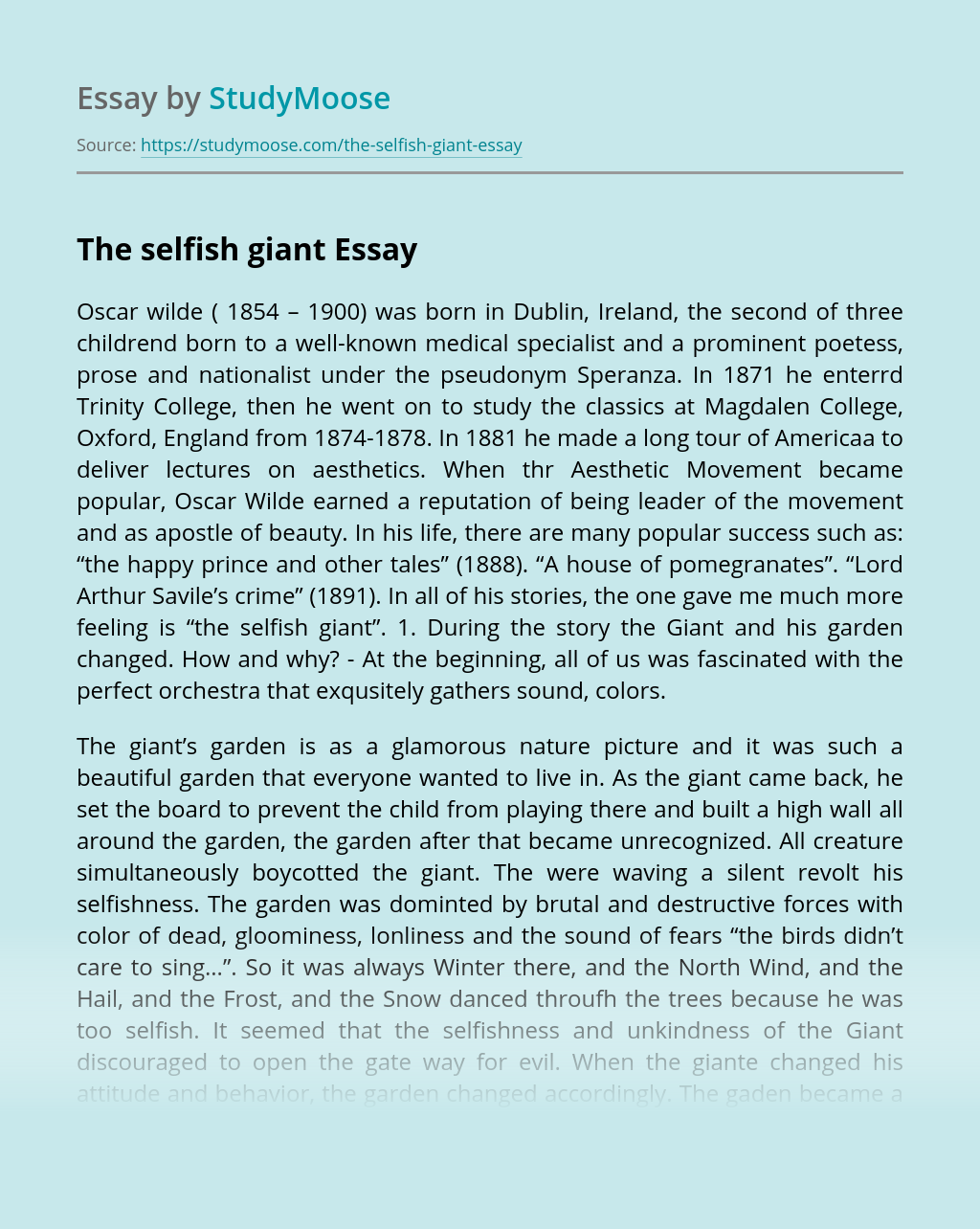