The Role of Judges in Israel

Judges during the settlement period in Israel had the role of military leader and also the role of tribal champion. The term judge in Hebrew, shaphat, encompasses a wide range of meanings. It does not only involve arbitration as would be understood by the English meaning of the word. The judge in the Israel tribes was responsible for the defense of what was right, removal of oppressors, punishment of offenders and restoring things to their right order as well as vindicating the victims of wrongdoing.

Don't use plagiarized sources.
Get Your Custom Essay on The Role of Judges in Israel Just from $13,9/Page

The authority of the judges was mostly found in the personality of the judges who were mainly directed by the Spirit. Heredity and election to office were not very significant in the position of judges (Matthews, 2002).

The period of the Settlement was a period of chaos for the people of Israel. There was no longer any unified leadership as it had ended with the death of Joshua. Decline in morality and political dissolution were the main challenges that faced the Israelites at the time (McKenzie, 1967).

The nation of Israel upon settling in Canaan was unable to completely conquer the Canaanites both religiously and militarily.  Initially under Joshua they were able to conquer most of the Canaan lands, however this did not last long as they departed from the ways that had been set for them to follow by Yahweh. Whenever the Israelites had some kind of prosperity, they would engage in self-willed acts and apostasy prevailed. Thus a vicious cycle of sin followed by oppression then repentance and delivery was maintained.

When the Israelites were punished for worship of other Gods, a Judge would arise and they would be delivered from oppression but they would go back to their ways and disregard Yahweh after they became prosperous. Judges had a role of ad hoc leadership whenever a crisis occurred.

The historical situation at the time of the Judges was such that the nation of Israel was fragmented and had a lot of enemies pressing on them from all the sides. During the reign of Joshua there was much confidence and togetherness and when the book of Joshua is coming to an end, the people renew a commitment to honor Yahweh. This is however absent in the account of the book of Judges and there seems to be more desperation with people asking, “who shall go up for us against the Canaanites?”

Judges addressed the problem of moral decline and apostasy by pointing out the wrongs of the Israelites from the Word of God. They would then encourage and/or compel the people to repent so that they could find favor with the Lord and therefore bring an end to their punishment. Yahweh, punished the Israelites by allowing them to be oppressed by the neighboring tribes. When a judge arose, the people would abandon their self-willed ways following the charismatic leader. They would be organized into an army that would fight off the oppressive enemy.

However the battles were fought in such a way that the Israelites would heavily depend on Yahweh to win. In this way their victory was always accredited to the Lord and as such for some time following the victory they would worship Yahweh and follow his statutes. For instance, Gideon was a charismatic leader who most people would have viewed as very unlikely. This is because he was from the smallest family of the smallest tribe of the nation of Israel (the Benjamites). Further he was a coward and to make his victory even more miraculous he fought with a small army of only 300 hundred against the Midianites. Israel after conquering her enemies was able to stay in peace for a period of forty years.

Deborah’s role in Barak becoming judge was unusual in the sense that women in the Israelite community did not have much role in religion and leadership. This creates an unusual situation and the victory of the Israelites under the leadership of Barak led to another period of peace and following of God’s statutes. Barak’s reluctance to heed Deborah’s summons to be a leader of Israel led to him being deprived of the honor of killing Sisera (Bratcher, 2008). Judges relayed messages from Yahweh to the people and often this were accompanied by a miracle or promise of an end to oppression.

This had the effect of getting the attention of the Israelite nation long enough to get them to change their ways. They also constructed altars for worship of Yahweh. Other problems of moral decline were addressed after victory had been attained against the enemy and the Israelites were most sensitive to Yahweh’s word. The judge would play the role of arbitrator and provide advice to the people whenever they needed it.

The judges seemed to be only partially effective in their role as rulers because they were able to maintain peace in the nation of Israel for a long period of years until the Israelites fell into sin again. Their effectiveness however was not complete and may have been compromised by the scattered tribes who were trying desperately to gain some stability in the land. Further, the death of Joshua left no successor and those who came to power were the local leaders but more for military reasons than anything else.

These leaders had serious flaws and thus peace and stability as well as the worship of Yahweh could not be sustained for long amongst the Israelites. For example, Gideon in spite of being used by God to win a victory against the Midianites in extraordinary conditions still  led his family into the worship of Baal (Bratcher, 2008). Samson also was inept and flawed; though he had taken Nazarite vows his preoccupation was not the welfare of Israel, rather, he was concerned with Philistine women and this eventually led to his demise.

Judges were more local leaders than leaders of the nation. This is because most of the Judges are seen to be leading one tribe against oppressors. Ehud led Benjamites against the people of Moab, Othniel was a leader for Judah against Arameans, Deborah led the people of Ephraim against Hazor and many others.

The fragmentation, both socially and religiously of the Israel nation may have affected the effectiveness of the judges in addressing the problems of the Israelite nation. As the book of Judges come to an end and in the beginning of the book of Samuel, the need for unity is emphasized as the people request for a king, who they felt would have been more effective in carrying out the responsibilities of a leader unlike the judges.

Bratcher D, 2008, Settlement or Conquest, History and Theology in the books Judges and Joshua, retrieved from

The Role of Judges in Israel. (2017, Mar 23). Retrieved from https://studymoose.com/the-role-of-judges-in-israel-essay 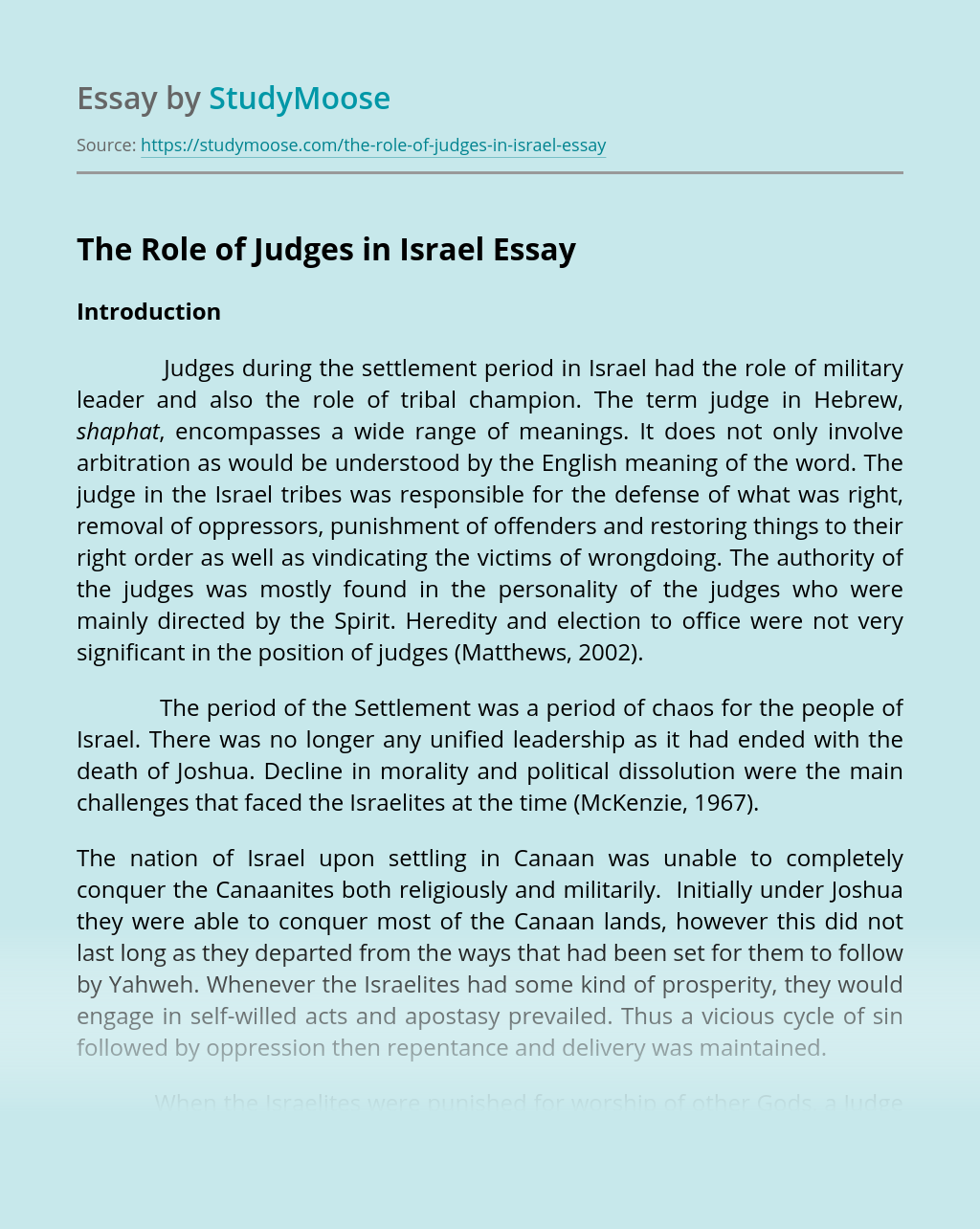 James Price is an Information Technology consultant with specific expertise in website design. His consultancy is doing well, but he would really like to gain another client to ensure that he has enough work for the foreseeable future. One Saturday, at his brother Anthony’s 40th birthday celebration, James is approached by Mark Jackson, a store...

Get Essay
The Old Man and the Sea

The idea of sin (and original sin) are important to the tension, suspense, and character development of The Old Man and the Sea. Santiago, the novel’s protagonist undergoes two seemingly separate battles during the course of the novel: first against a gigantic marlin he hopes to catch while fishing alone, far at sea; the second...

I picked to finish my service finding out hours at the Quantum Home. It is an organization situated on 45th street behind St. Mary’s Medical Center in West Palm Beach, FL. The Quantum House is an encouraging house where households can stay while a member of their household is being dealt with nearby. The Quantum...