The relationship between Curley and his wife

All the female characters used by Steinbeck are either, prostitutes, a carer or a victim. Their marriage is bizarre because they have only been married for 2 weeks and they don’t like each other. We can tell this because they are never together in the book also she flirts with other men because she is lonely all of the time and Curley goes to the cat house. Curley wears gloves full of Vaseline on his right hand because he is keeping his hand soft for his wife.

Don't use plagiarized sources. Get your custom essay on
“ The relationship between Curley and his wife ”
Get custom paper
NEW! smart matching with writer

He is also showing off because only he has a wife and the rest of the workers in the ranch don’t, he is trying to make them jealous. A character called Candy said ‘Seems like Curley is Cockier’n ever since he got married’ this tells us that just because he has a wife he is starting to show off for his wife and trying to act all big.

Curley’s wife represents such loneliness that she doesn’t get a name.

The possessive apostrophe in Curley’s wife’s name suggests that she is a property of Curley. She is very flirtatious and she has the eye for the men, she spends much of her time looking for Curley although she is really looking for other Companionship. Curley’s wife is working class I can tell this because she says ‘Where the hell is that god damn nigger?’ This is telling us that she is trying to fit in with the men & also because she is low status in the ranch.

When we first meet Curley’s wife she is wearing too much makeup and she looks like a “tart”. This tells us that she is trying to impress the men by getting over dressed. She put her hands behind her back and leaned forward so her body was thrown this tells us that she is sexually provocative. “Bye bye boys” she called out and hurried away this is telling us that she was apprehensive and intimidated that Curley would be indignant.

Steinbeck’s letter to and actress playing the part of Curley’s wife tells us that she grew up in an atmosphere of fighting and suspicion. She learned that she must never trust anyone and if she did she would just get hurt. Steinbeck says ‘She is a nice, kind girl and not a floozy’. Although she has never spoken to a man except in a sexual fencing conversation. Steinbeck also says if you know her properly and her background you would find her as a nice person and honest person and you would end up loving her, this is telling us that she is not one of them prostitutes. I can tell this because she has only had sex with Curley and she knows nothing about sex.

The men talk about Curley and his wife and say words like ‘the new kid’, a “looloo” and ‘Curley’s’ pants is just crawlin’ with ants’ this is telling us that the men have no respect for Curley and his wife and they don’t like them and they will get away with it because they can’t hear. Curley and his wife represent lost dreams because both of their dreams were crushed. Curley’s dreams were crushed when he was in the final tournament of the golden gloves when he was defeated. And Curley’s wifes dream was crushed because an actor was meant to send her a letter after he arrived in Hollywood to be an actress but she never received.

She always thought her old lady stole it because she never let her go to the shows because she was only fifteen. Curley’s wife talks to Lennie about her marriage. She says ‘I don’t like Curley. He aint a nice fella’, this tells us that she doesn’t like her marriage and she is intimidated by Curley. Steinbeck is making us feel pitful for her because she is lonely. When Lennie kills Curley’s wife Curley doesn’t seem to get angry he just wants to kill Lennie not because his wife is dead, because he doesn’t like Curley. In conclusion I think that their marriage was not right for each other because Curley’s wife hated him and they never got on together.

The relationship between Curley and his wife. (2016, Nov 17). Retrieved from http://studymoose.com/the-relationship-between-curley-and-his-wife-essay 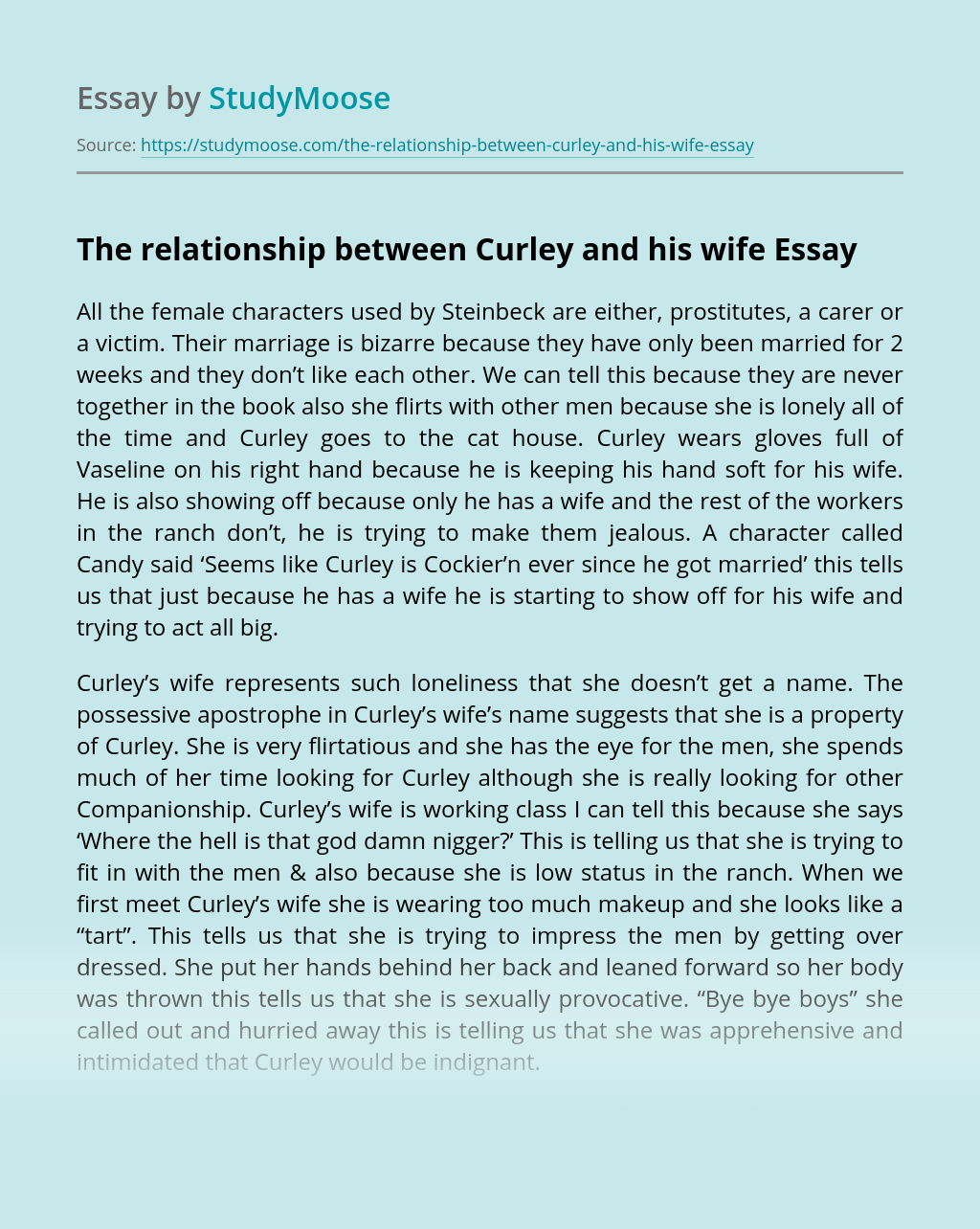