Although many realist films tend to realize that the viewer is an observer, there is a theme that is clearly established in the first few minutes of Rear Window (Alfred Hitchcock, 1954) with a variety of long shots that clearly show the setting; complimenting this Hitchcock also utilizes pan and dolly as well as transitioning angles so we can observe every apartment and tenant. Sound and different camera distance also contributes to the mise en scene that further presents the theme in conjunction with the cinematography.

Turn in your highest-quality paper
Get a qualified writer to help you with
“ The Rear Window – Sequence Analysis ”
Get high-quality paper
NEW! AI matching with writer

The mise en scene and cinematography in the beginning sequence of Rear Window clearly sets the stage for the viewer to take on a role of careful yet clear observation and watchfulness. This in turn sets the overall theme of rubbernecking or spying, not just observing. To start out, we are placed behind the confinement of an apartment looking at three open windows with the shades down. As they slowly open, we begin to observe the first cinematographic technique Hitchcock uses to introduce the theme of observing.

We dolly out of the window to see that we are on a top floor of an apartment in an apartment block. Because we are out of the window, we begin to crane. It reinforces the fact that we are actually looking out over the apartment block, observing everything we see. This is emphasized further as we immediately transition to a high angle shot. This places us in a position that implies we are high up, giving us a role of an eagle-eyed spectator.

We are reminded that we are looking out to observe carefully.

Hitchcock keeps dollying through and panning across the apartment block, while pausing the camera at every window as we watch everyone’s routine. This particular shot is mostly continuous as well, which again implies that we are still looking out the window, turning our heads to look through the window of every tenants’ personal lives, made clear with the pausing. We even pause slightly in the house of the main character, which is inferred by the cinematography: Hitchcock takes the camera and passes by his face twice.

The camera first captures what we see outside, then transitions inside the main character’s house and begins to do the same techniques inside with magazines, cameras, and photographs. Hitchcock successfully reinforces a strong theme of curiosity and prying, both inside and outside with cinematographic techniques. Our senses are heightened as out of the theme music we hear a meow, looking down at a cat that runs across the ground. This introduces the mise en scene that Hitchcock uses to subliminally convey to the viewer to use their senses, which contributes to his overall theme.

From the start, we begin to discern sound and vision because of the cat. As we dolly to the first sight of the main character, which is an extra close up shot, we can clearly see him sweating. The camera then pans to a close-up of a thermometer, to the point that we can read the temperature, revealing the main character’s reason for sweating. We are again reminded to keep our senses on the lookout for small details, as the camera moves on to the different tenants’ windows. The first tenant we observe is taken using a long shot, where he is seen shaving.

Our focus switches from our sense of sight to our sense of hearing when the music suddenly dims out into an advertisement, which catches our tenant’s attention who then goes to his radio to switch stations. The music changes to replace the original jazzy background music. Again, our perspective changes as we realize the music came from a tenant’s window. This further gives the role of an observer physically there to the viewer. The next few tenants are shown waking up and dressing up respectively. The camera seems to pause for a longer time at the window with the woman dressing up, suggesting a more voyeuristic aspect to the entire theme.

An alarm clock rings, which is another aural cue that give us more details to introduce us to our surroundings; the actions of the tenants and what we hear suggest that the opening scene is taking place in the morning. We then cycle back inside to the main character’s house. The mise en scene that is continuously changing to support the same theme is emphasized by the long take on the entire opening scene. Hitchcock takes it to another level by using aural cues that stimulate our senses to uphold the theme of observance.

Much of Hitchcock’s use of high angles and dolly are significant examples of cinematography that contribute to an apparent, repeating theme that will almost certainly set the baseline for the rest of the film. Hitchcock then uses mise en scene with supporting aural cues that further stimulate our senses to create a very authentic viewing experience to emphasize us looking out the window, spying on other peoples’ daily routines, which is made apparent by the camera dolly and crane that is continuously utilized in the scene. The theme of spying and observing is clearly emphasized by techniques used by Hitchcock. 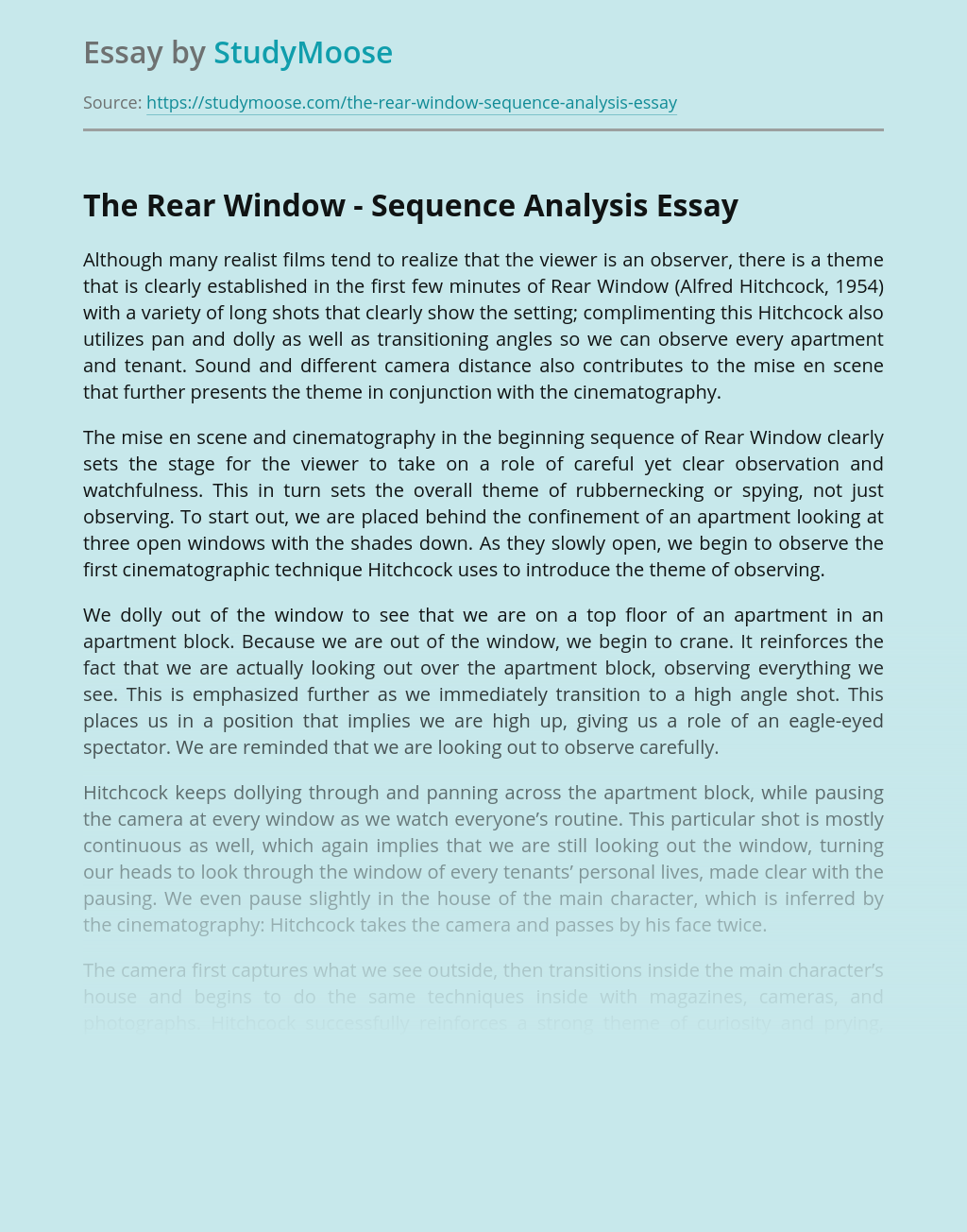 Turn in your highest-quality paper
Get a qualified writer to help you with
“ The Rear Window – Sequence Analysis ”
Get high-quality paper
Helping students since 2015
Stay Safe, Stay Original