The Real Protagonist in Arthur Miller’s Death of a Salesman

In Arthur Miller’s Death of a Salesman, contrary to what is commonly expected, many readers actually believe that Biff Loman is the main character or the protagonist. Given that Willy Loman, his father, appears in almost every scene and is also mentioned in the title, the expected trend is for Willy to be universally considered as the main character. Therefore, questions regarding the reasons behind the belief that Biff is the real protagonist arise. In order to establish a valid discussion, it is important to clarify the definition of protagonist in this case.

Don't use plagiarized sources. Get your custom essay on
“ The Real Protagonist in Arthur Miller’s Death of a Salesman ”
Get custom paper
NEW! smart matching with writer

The main character of the story is supposedly the one who serves as a center or focus of the conflicts and resolutions brought about in the development of the story. A possible problem with such a definition is that other characters may go through several processes of conflict and resolution as well. To prevent such confusion, one must consider the main problem addressed in the story. The main problem in the story is Willy’s deluded concept of success.

As the story unfolds, one will surely notice that he measured success through a materialistic point of view.

He placed importance in the acquisition of larger sums of cash in comparison to what he earned. In addition to this, he viewed the chances of success in terms of how well liked a person is. Also, he was portrayed to be quite an unfaithful husband. His negative characteristics were understandably passed on, although not entirely, to his sons. Given this point, the main conflict in the story that needs to be overcome is to be released from such ways of thinking.

Hence, the task for the main character is to become free from the influences of his father and finally be able to accept a better and more realistic point of view which would result in better outcomes, unlike the consistent proofs of the personal dissatisfaction exhibited by Willy. At the beginning of the story, chronologically, Biff was considerably proud of his father. He believed in everything that his father believed in. All of this was broken after he found out about the affair that his father had.

Since that point, he denounced all the common beliefs that he and his father shared. He no longer believed on the validity of his father’s views. That point was the catalyst for the possible reformation of character and production of solution to the main conflict. Due to the fact that he hated his father, he then acknowledged that the ways that he adopted from his father were wrong, as exhibited from the fact that he lied to people about the real nature of his job by claiming that he holds a higher position.

While Willy never had the chance to reform due to death, Biff had a real chance of solving the problem. This was observed when Biff finally talked to his employer, and as a result, he eventually cleared out his mind of the mistakes that he has made. Hence, in the end, he became considerably free of the negative impacts of his father and was able to view the world in his own sense. Also, another important factor in considering the main character of a story is the ability of the character to connect with the reader.

In other words, the main character is able to convey to the reader that there is a sense of possibility in solving the problem. In turn, the reader typically roots for the character. Willy was apparently nothing more than the embodiment and source of conflict. Biff, on the other hand, was the character affected by such problems, and yet, he eventually worked towards resolution. Hence, given these points, it is quite understandable why many consider Biff as the true main protagonist in the story.

The Real Protagonist in Arthur Miller’s Death of a Salesman. (2017, Jan 30). Retrieved from https://studymoose.com/the-real-protagonist-in-arthur-millers-death-of-a-salesman-essay 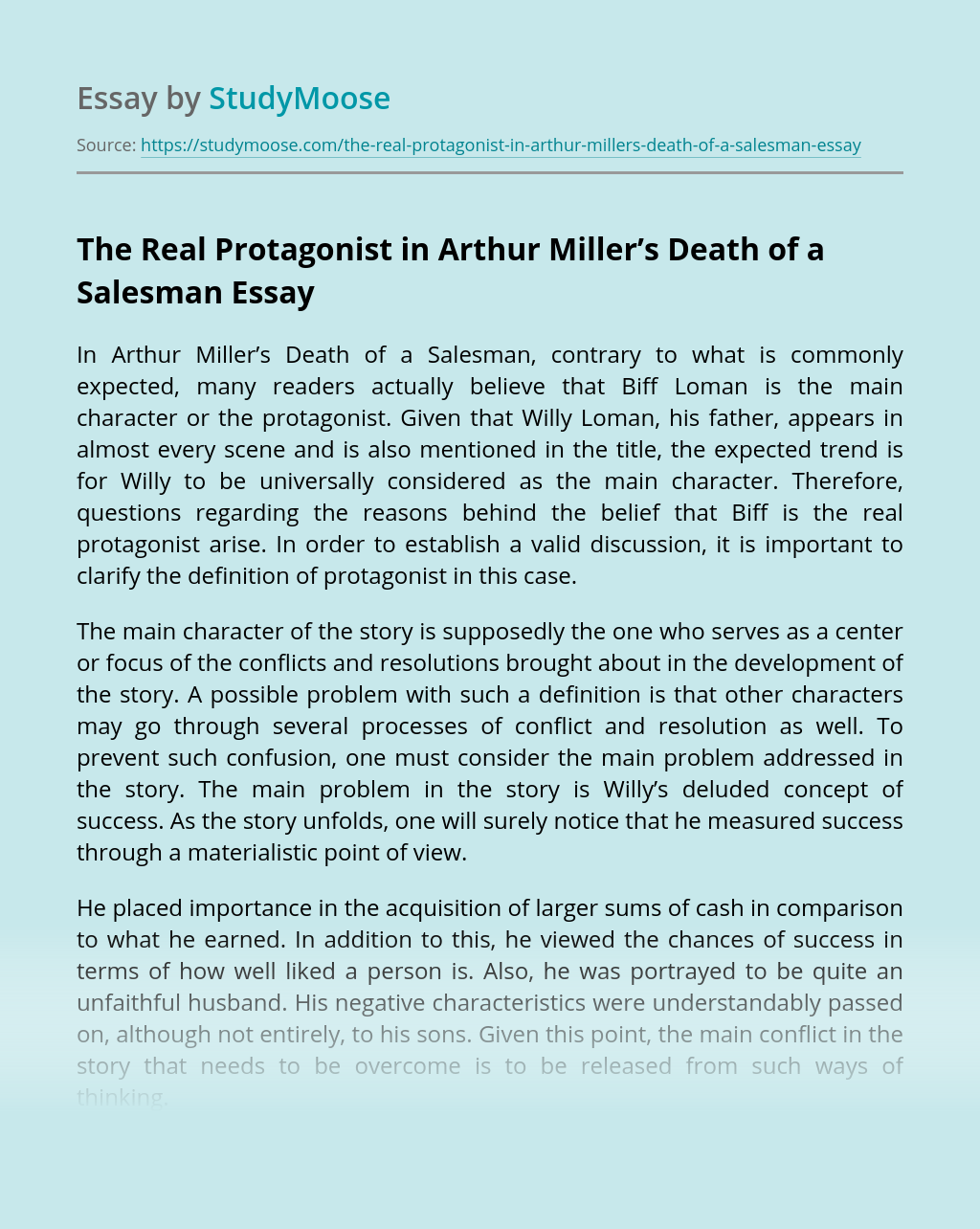