The Pros of Racial Profiling in Law Enforcement

The image of hundreds people jumping to their deaths out of windows 1,000 feet of the ground, to the masses of people chaotically running through the streets will never be forgotten to the people affected by terrorist attacks on September 11, 2001. Ever since that catastrophic day in history, the push for safer national security measures has been crucial in making sure an attack never occurs again; one of these measures being racial profiling. Racial profiling is the use of race or ethnicity as ground for suspecting someone of having committed an offense.

Don't use plagiarized sources. Get your custom essay on
“ The Pros of Racial Profiling in Law Enforcement ”
Get custom paper
NEW! smart matching with writer

Racial profiling in law enforcement is essential to safely secure the citizens of the United States.

Protecting national security and ensuring public safety are two of the benefits of racial profiling. The United States Department of Justice requires that “…federal law enforcement personnel must use every legitimate tool to prevent future attacks, protect our Nation’s borders, and deter those who would cause devastating harm to our nation and its people…” (“Should Racial”). One of these tools in police work includes racial profiling, which helps to protect and prevent crime in our nation.

It is logical to agree that “If an officer sees someone acting in a manner that suggests a crime is afoot; he or she has an obligation to stop and question that person” (Bloomberg). Preventing crime is a police officer’s job, which is why the nation uses this strategy. They are here to keep the nation’s citizens safe. “Without the use of profiling and FBI informants, they would have never succeeded” (“Should Racial”) in their attack on the United States. Racial profiling by law enforcement is strictly for the benefit of society so that they can effectively protect and provide security. The nation’s citizens need to understand that without measures like racial profiling, people are not going to be safe.

When law enforcement officers have to identify suspects, they are to use every tool possible, one of these tools being racial profiling. Often times “…police officers rely on information that may be coincidental to skin color, but not dependent on it” (“Should Racial”). It is these officers’ job to look for suspects who happen to have a certain characteristic to identify by. Therefore, using racial profiling in this aspect is helpful and most definitely constitutional. When an officer is looking for a suspect, “…adding his knowledge of the race of major trafficking groups to the mix is both legitimate and not overly burdensome on law-abiding minorities” (“Should Racial”).

By having an understanding of an ethnic group’s background, police officers can more effectively identify suspects, reducing the likelihood that suspects wouldn’t be charged with a crime. It is necessary that “If law enforcement officers are to identify and take action against violators, any information to assist them in being more effective is crucial” (“History and”). Racial profiling can be the key for officers to effectively identify violators. The use of racial profiling in law enforcement makes society safer because it makes it easier for officers to identify a suspect with their race as a characteristic.

Some people may argue that racial profiling goes against the Constitution and country’s morals. The American Civil Liberties Union argues that “…racial profiling is in every instance inconsistent with this country’s core constitutional principles of equality and fairness” (“Should Racial”). If the American Civil Liberties Union wants everyone to be equal and treated with fairness, then that means protecting everyone equally and fairly. While this may be true in some peoples opinion, “…the president has emphasized that…Federal law enforcement officers who are protecting national security or preventing catastrophic events…may consider race, ethnicity, and other relevant factors to the extent permitted by our laws and the Constitution” (“Should Racial”). Therefore, the use of racial profiling as a tool to protect and prevent in law enforcement is completely legal.

The Preamble of the Constitution states “We the people of the United States, in order to form a more perfect union, establish justice, insure domestic tranquility, provide for the common defense, promote the general welfare and secure the blessings of liberty to ourselves and our prosperity…” (“Preamble”). Those who oppose racial profiling are absolutely incorrect when they say that it is against constitutional beliefs. Right here, in the Preamble of the United States, it talks about forming a perfect union and ensuring and providing the safety of it.

The use of racial profiling in law enforcement is the key to safety within the United States. It proves to be incredibly helpful when having to identify a suspect and making society safe. If the safety of every citizen was not ensured and police did not use every tool they could to capture suspects, would you feel safe?

The Pros of Racial Profiling in Law Enforcement. (2016, Sep 16). Retrieved from https://studymoose.com/the-pros-of-racial-profiling-in-law-enforcement-essay 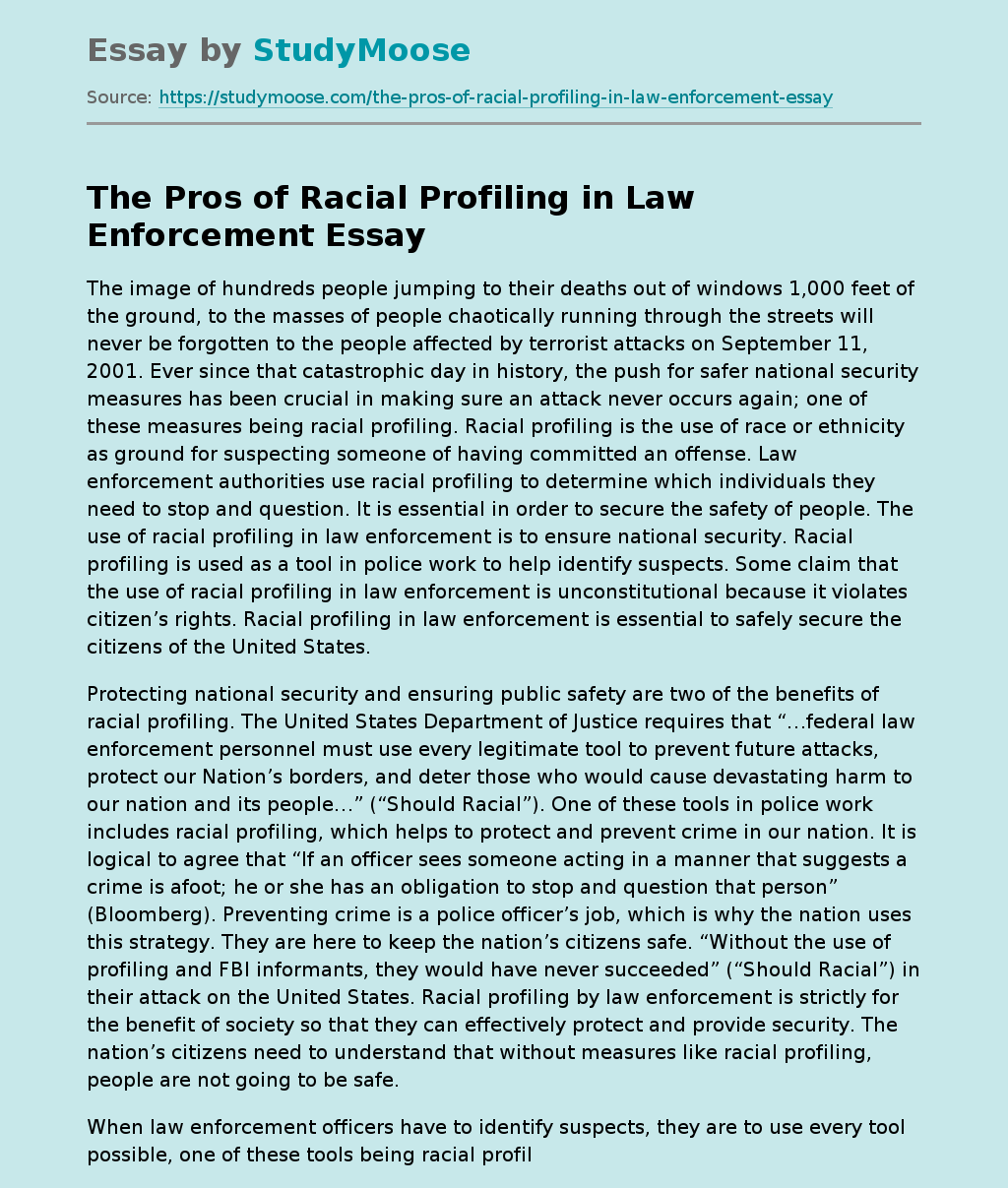