The Pros And Cons Of Fitting In

In the real world today, people from every background have faced the reality of social life and where they believe they would thrive the most. Although we think we are always right in any given situation, it never really turns out that way and encounters with fitting in and the decisions made to be included in a certain social group acknowledge the fact that sometimes we are wrong. A quote by Rick Warren states, “Those who follow the crowd usually get lost in it.

Don't use plagiarized sources. Get your custom essay on
“ The Pros And Cons Of Fitting In ”
Get custom paper
NEW! smart matching with writer

” This comment describes that once we become a follower, it is difficult to change, and may become trapped in the life of doing acts and deeds for the leader who takes all the credit while we starve just to keep in the category of a follower. In both short stories, “Greasy Lake” and “Initiation”, the main characters are confronted with decisions that makes it very hard for them to pull themselves out of. The two stories commonly share the same message that maturity, temptations, and peer-pressure arise all the time and how we deal with it determines our future.

Proficient in: Social Life Of Human Being

In “Greasy Lake”, the narrarator faces actions he does that questions if the description associated with him is the person he truly is or if he is just a regular teen who thinks he already grew up and matured. For example, the author in “Greasy Lake”, describes the main character as a tough teen who takes on the role of an adult even when he shows immaturity at moments.

“We were all dangerous characters then. We wore torn-up leather jackets, slouched around with toothpicks in our mouths, sniffed glue and ether and what somebody claimed was cocaine” (T. Coraghessan Boyle). The characters in this short story do acts that they will reflect later on in life and realize that they were just childish and extremely ignorant. Although most of them were 18 or above, and felt like nothing could stop them, one man stood up to the three boys and put them to the test. In addition, once the situation got out of hand, they fled the scene proving that even the toughest teens have character flaws.

The fact that they fled like cowards really questioned their integrity and maturity, but also made people think if they would do the same even if it made them look like a “pansy”. Even with their backs against the wall they could care less how they looked at the moment because like any other human being safety comes first. Furthermore, the narrator even sees himself as a child afraid of growing up, but takes on the role of a tough individual to fit in when he states, “Understood, and stumbled back in horror and revulsion, my mind yanked in six different directions (I was nineteen a mere child, an infant, and here in the space of five minutes I’d struck down one greasy character and blundered into an waterlogged carcas of a second.)” (T. Coraghessan Boyle). The narrator exploits the fact that he was still a child who never thought before he acted and in this instance could have cost him his life. He realizes that being a tough individual suits other people, but not himself. All in all, the boys came to the conclusion that being “bad” looks and feels cool but often can lead to tragic outcomes when they give in to peer-pressure.

In “Initiation” by Sylvia Plath, a question pops up: Are they doing these acts because they want to or because everyone else does it? For example, the main character in Initiation, Millicent, waited for a very long time to get a chance to be initiated in a secluded sorority, but realizes that the chores assigned to her makes her question if she really wants to go through with the whole initiation. “Millicent looked down the aisle of the crowded aisle and felt suddenly quite sick. She thought: How will I ever do it, going up to all those stony-faced people who are staring coldly out of the window…”(Sylvia Plath). Certain initiation dares like this one made Millicent regret wanting to be a part of the sorority, but she overcame her fears and did all of the assignments asked upon her and it really showed maturity.

Although Millicent did every chore her big-sister asked her to do, she disobeyed the orders occasionally, and therefore got punished for sometimes even smiling at a boy. There came a point in which Millicent became fearless of any act requested of her and the duties became a game for her. “And from that time on, initiations didn’t bother Millicent at all. She went gaily about Lewiston Square from store to store asking for broken crackers and mangoes, and she just laughed inside when people stared and then brightened, answering her crazy questions as if she were quite serious and really a person of consequence” (Sylvia Plath). Initially, Millicent was a typical subject of how every girl acts in the process of initiation, but Millicent came out of her shell, showed no weaknesses, rather maturity throughout the entire process.

“Greasy Lake” and “Initiation” are both stories that really emphasize the importance of maturity and in situations we need to keep that maturity and act like adults rather than children. In fact, in “Greasy Lake” the narrator attempts a god awful act with the help of his two buddies showing no care for others. In “Initiation”, Millicent completes her long set goal of becoming a member of the sorority, but instead displays maturity in setting away from the group and feeling that she does not need to be a follower to make friends or get noticed. “It was just that she had learned there were other ways of getting into the great hall, blazing with lights, of people and of life” (Sylvia Plath). This quote defines the exact message that separating from the flock works out the best because once that happens people will want to be around an independent person. Even when the safest role points to a follower, learning to step aside and experience the other life of a leader exploits maturity.

Also, in “Greasy Lake”, the narrator shows his manhood, but right when the characteristics of a “badass” fades, he commits the worst and feelings about him change, pointing out the bad characteristics. “I came at him and brought the tire iron down across his ear. The effect was instantaneous, astonishing. He was a stunt man and this was Hollywood, he was a big grimacing toothy balloon and I was a man with a straight pin. He collapsed. Wet his pants. Went loose in his boots” (T. Coraghessan Boyle). The narrator brought down what seemed to be a overly tough human who was larger than most and held his own against the three boys until he was knocked out by a tire iron. The narrator now felt unstoppable at this moment, and took it out on the man’s wife who was totally helpless. All together, the narrator and Millicent made choices that affected their future tremendously positively or negatively.

Peer-pressure often affiliates with bad vibes and elements, but how one deals with the situation determines what kind of person he/she reflects. Therefore, one frequently gets caught up in all the effects of peer-pressure and when that person goes forth with the act forced upon them, worse situations stand in their way. In addition, the world of peer-pressure preys on the weaknesses and vulnerability of people and attracts the wrong crowd. In order to stay out of peer-pressure, the word “no” stands the biggest chance against the temptations that arise all the time in people’s teenage years and sometimes later on in life. All in all, people do not realize how strong and affective peer-pressure becomes, and once entangled in the thick of it, the probability of avoiding it is extremely difficult.

The Pros And Cons Of Fitting In. (2016, Aug 19). Retrieved from https://studymoose.com/the-pros-and-cons-of-fitting-in-essay 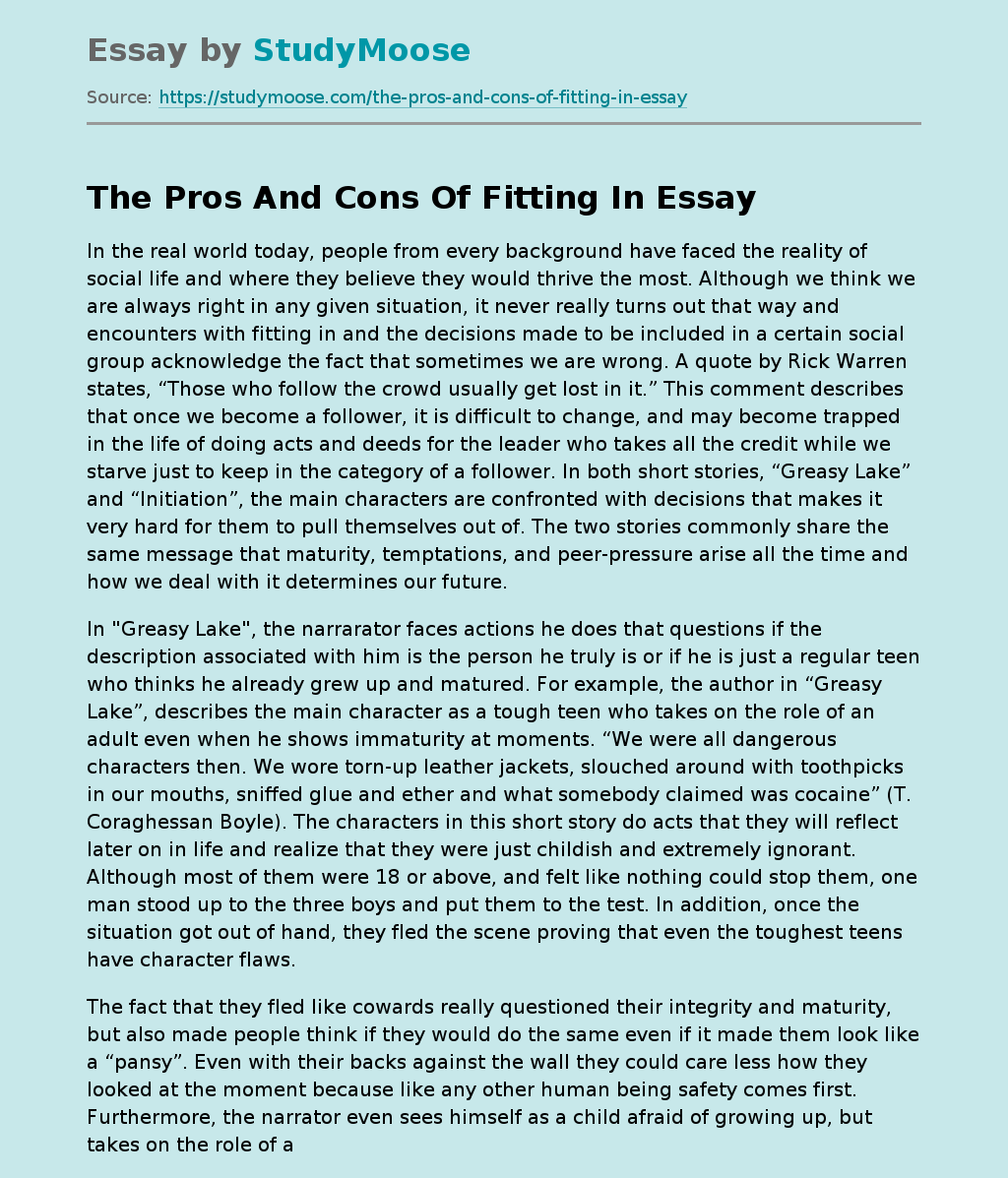