The Problem of Human Alienation

Alienation is a very important issue in 21st C society that has the potential to affect anybody. Alienation is present in school, work, and other settings in life, and it is experienced by many people around the world. Alienation also means choosing not to be with anyone because of the feeling that you do not fit in. It is defined as the state of being an outsider or the feeling of being isolated from society. This condition may be caused for various reasons such as hatred from society, and rejection from others because of one’s unique personality.

Don't use plagiarized sources. Get your custom essay on
“ The Problem of Human Alienation ”
Get custom paper
NEW! smart matching with writer

While alienating oneself may seem like a solution to the problems of dealing with people, it will prove harmful in the long run, leading to feelings of confusion, desolation and hopelessness. Characters in short essays illustrate different examples of alienation as well as the causes for the estrangement. Gloria Anzaldua in “How to Tame a Wild Tongue,” Judith Cofer in “The Myth of the Latin Woman: I just Met a Girl Named Maria”, Brent Staples in “ Just walk on By: Black Men and Public Space,” and Zora Hurston in “How it Feels to Be Colored Me,” illustrate with descriptive experiences how they were being alienated by society due to the demands of the language and self-estrangement, while others are alienated by the racial prejudice that dominates the community.

Immigrants who have migrated to a new location tend to feel alienated due to differences in languages and/or accents. Clearly, this was the case for Gloria Anzaldua.

Anzaldua considers her accent as an essential feature that identifies her. She explains that the Chicano Spanish that she speaks developed naturally as a border language. In her essay, for instance, she explains “I remember being caught speaking Spanish at recess–that was good for three licks on the knuckles with a sharp ruler. I remember being sent to the corner of the classroom for [‘talking back’] to the Anglo teacher when all I was trying to do was tell her how to pronounce my name” (Anzaldua 28). She explains the problems she feels because she is not accepted as a native speaker by both English speakers and Spanish speakers. Therefore, this causes a strong feeling of isolation because Gloria does not identify herself socially with either of these groups, so her language is not accepted by some of the very people who speak it. Anzaldua experiences negativity in school when she tries to use her first language in informal situations. The attitude from her teacher and classmate obviously affected her and made her feel alienated. Anzaldua talks about her childhood being difficult in America, how she was not accepted by her Spanish friends because she was Chicano Spanish. In both instances, the school did not encourage her to speak her language but rather discouraged her, and whenever she spoke her native tongue, she was reprimanded. Likewise, Judith Cofer had to learn to speak the language to avoid and deal with the alienation she faced. One instance was in a hotel when she was forced to listen to a white man clearly stereotyping Latin women through his offensive singing. In fact, the man must have assumed that she did not speak English. Cofer expressed, “because of my education and my proficiency with the English language, I have acquired many mechanisms for dealing with the anger I experience” (Ortiz 107). She uses her skills in English to not feel alienated. Both authors, Anzaldua and Cofer show how language influences the way you feel in society.

The second cause of alienation is due racial prejudice within society. In Hurston’s essay he explains the difficult experiences she faced. Raised in the all-black community of Eatonville, Florida, at age thirteen Hurston is sent to school in Jacksonville where she is no longer Zora, but a little “colored girl.” Hurston notices that for the first time, she is a “little colored girl” instead of simply being herself. She remembers: “Someone is always at my elbow reminding me that I am the granddaughter of slaves” (Hurston 190). Hurston experiences alienation because she was a different race from other people in Jacksonville. She felt rejected in her new home town. Another aspect of racism shown in Staples’ essay where he describes the stereotypes, and criticisms he faces as a black man living in white neighborhoods. For instance, Staples demonstrates an example of this when he writes “I often see women who fear the worst of me. They seem to have the faces on neutral, and with their purse straps strung across their chest bandolier-style, they forge ahead as though bracing themselves against being tackled. I understood, of course, that the danger they perceive is not hallucination” (Staples 340). Staples clearly explains one of his many experiences he had to face due to his color. He says that women automatically assume that the he is a criminal because of her experiences labeling innocent black men as criminals. The author skillfully highlights the subconscious racism by describing this experience. Staples recalls an incident where a young white woman runs away from him because of his appearance. The two authors explained how race plays a big role in making them feel excluded from society.

Sometimes alienation is self-imposed because there are circumstances where a person will feel like they do not fit in. The state of self-alienation— that of not being one’s real self — is so predominant that its symptoms are not conspicuous. You miss noticing them because they are so general that you assume them to be “normal.” For instance, Anzaldua feels this way when she says “I remember the singing-type “westerns” of Jorge Negrete and Miquel Aceves Mejia. When watching Mexican movies, I felt a sense of homecoming as well as alienation. People who were to amount to something didn’t go to Mexican movies or bailes, or tune their radios to bolero, rancherita, and corrido music” (Anzaldua 35). In other words, her feelings were ambivalent because she feels good, she feels like home but also at the same time she feels bad when watching Mexican movies. She feels this way because her new environment is different and lacks the aspects of her culture that she is used to. In addition, Cofer stated, “I often felt humiliated when I appeared at an American friend’s party wearing a dress more suitable to a semiformal than to a playroom birthday celebration” (Cofer 104). She feels angry at herself and self-estrangement when she should not feel this way because she is an outsider. Both authors show a different cause of alienation which is self-estrangement in relation to society.

Overall, the frequent use of alienation as a centering theme is due to the fact that it is common to all humans. Alienation is a feeling of not belonging. This feeling can be because of differences in language, color, and culture, and often it tends to be a combination of more than one of these types. Alienation is a driving force that pushes the human conscience to extremes. States of alienation come to exist as the result of many situations. Anzaldua, Cofer, Hurston, and Staples experience the damaging effects of alienation as a result of their differences in language and race. Alienation results in numerous negative effects such as loneliness and depression, leading to self-estrangement. It is said that happiness can only be real when shared; lives are not meant to be lived alone on an island, but shared with others.

The Problem of Human Alienation. (2020, Nov 29). Retrieved from https://studymoose.com/the-problem-of-human-alienation-essay 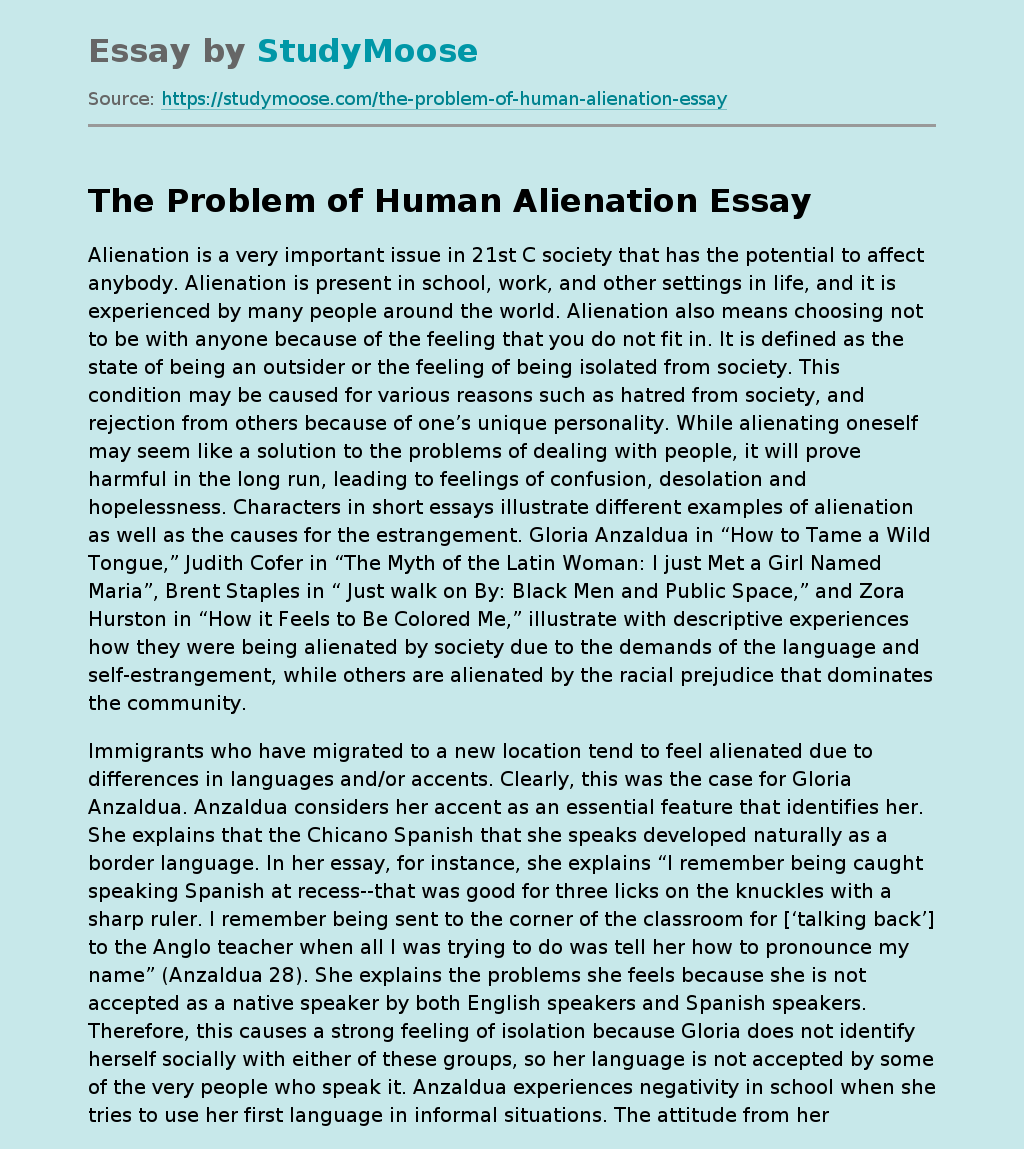