The Power of Tone in the Narration

“My Last Dutchess” is a stellar piece of poetry by one of the world’s best known poet and author, Robert Browning, in 1842. The poem is written as a confessional monologue which allows the audience to seep into the narrator’s, the Duke, mindset and character. Browning’s ability to fully flesh out the character of the Duke as well as revive his dead but not forgotten Last Duchess is a testament to his skillful writing. Through the use of dramatic tone Browning breathes life into the sinister character of the Duke who reveals his inner thoughts, malicious actions, and guilt, through a seemingly innocent and perhaps boring monologue.

Don't use plagiarized sources. Get your custom essay on
“ The Power of Tone in the Narration ”
Get custom paper
NEW! smart matching with writer

The character, the Duke, is loosely based on a real duke in the 1500s. The Duke’s name was Alfonso II and he was the Duke of Ferrara, Italy. He is speaking his mind out loud and his diatribe is quintessence of Shakespeare’s classic monologues in his famous plays. While the Duke is speaking he is over heard by the father of the woman who will become the Duke’s new wive, the next Dutchess.

The conversation begins as the father asks about a painting of the Last Dutchess, and the Duke begins to speak his mind.

He explains that the painting was created by the great artist Pandolf and the Duke comments that the picture looks as if the Last Dutchess is still living. It is because of the guilt that the Duke feels that he demands the painting be covered and forbids anyone from looking at it.

The narration by the Duke continues as he many a long list of things that he felt were wrong with the Last Dutchess. He claims that she smiled too much and gave her smile to everyone, she was far too nice and polite, and she was simple minded and eager to please.

He also claims that she was innocent and even naive. She often complimented people when they made or brought her things including paintings, flowers, and mules. The Duke continues that she finds pleasure in everything except himself. That she paid little to no attention to her husband. The Last Dutchess never offered him the respect, love, or submission that he expected, having been the Duke in a long family line of at least 900 years. He believed that her entire life should have been spent catering to his needs and wants. The question remains why is the Duke telling the father this.

Many people believe that the Duke is offering a list of wifely duties, that the father can pass along to his daughter before the marriage. The Duke explains why he did not tell his Last Dutchess these things, and comments that it “would be some stooping; and I choose/Never to stoop” (42-43). The Duke continues to speak stating he did not feel bad about his wife’s early death, and explains, ” I gave commands;/then all smiles stopped together” (45-46). After which the Duke hurries the father along to talk about the terms of the new marriage. The Duke makes it a point to speak first about money, and then about the “fair daughter’s self” (52-53).

“At this point the reader is unlikely to trust these declarations and is likely to fear for this young woman’s welfare” (Napierkowski 7). The narration of the Duke is accompanied by a unique speech pattern. In “My Last Duchess” the lines do not have end stops. Browning uses enjambment or sentences which do not conclude at the end of the line. For example in the first two lines of the poem, the sentence ends after “alive” but the line ends with “call” – rhyming the couplet but not finishing the thought. Instead of the rhyme creating a sense of closure and balance in the poem it does exactly the opposite.

The lines are not smooth and shadows the personality of the obsessive and rambling Duke. As he explains that his last duchess is no longer around and the reasons why, the poem becomes less like verse and more like a confessional monologue. This use of meter creates the sense of impending danger and supports the serious nature of the poem. The obstructive flow of the poem parallels the severe actions taken by the Duke. Browning’s most famous poem, “My Last Dutchess” is an intricately written piece of narration creates a tone which draws together the skill of voiced inner dialogue and meter.

The combination of creates a piece of writing which reveals the mind of a murderer, dominating man, and a society in which women are mere possessions. Browning’s manages to create and define characters in this these few lines which create a sense of time, emotion,and societal norms. As the poem closes, the Duke comments that he has the “desire to possess rare objects” and “the ability to do so” ( Napierkowski 7). Works Cited Napierkowski, Marie Rose, and Mary K. Ruby, eds. “My Last Dutchess. ” Poetry for Students. Vol. 1. Detroit: Gale, 1998. pages where poem appears.

The Power of Tone in the Narration. (2016, Aug 20). Retrieved from http://studymoose.com/the-power-of-tone-in-the-narration-essay 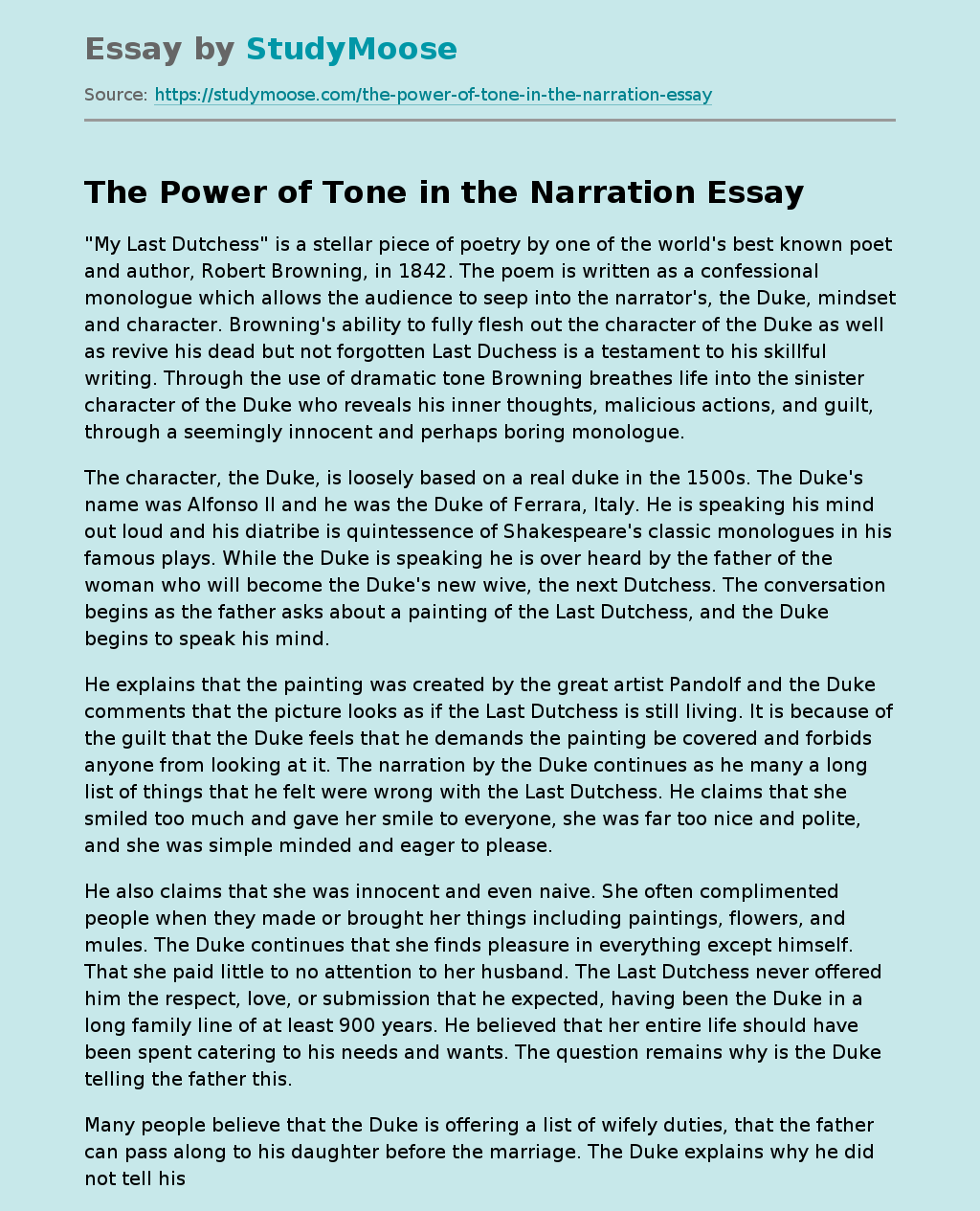