The play 'The Crucible'

The title of the play ‘The Crucible’ is significantly represented through key events that occur during the Salem Tragedy. Arthur Miller clearly uses both meanings of a crucible to great effect. A crucible is an earthenware pot that uses high temperature and pressure to heat metals. This process is used to remove impurities leaving only the pure matter. A crucible is also a severe trial or test. Throughout the play, it becomes quite apparent through Miller’s style of writing that he successfully characterises the 1692 society of Salem to the imagery of a crucible.

Don't use plagiarized sources. Get your custom essay on
“ The play ‘The Crucible’ ”
Get custom paper
NEW! smart matching with writer

The significance of the play’s title

The significance of the play’s title becomes first apparent at the beginning of Act 1. The kettle mentioned by Reverend Parris mirrors a crucible, and contains a brew made from a little frog and blood. This brew releases a dangerous and destructive force, which nearly brings down the whole community. This release of evil force is the impurities being released in a crucible.

The relationship between Abigail and Proctor is also shown through a link it shares with a crucible. It is based more on physical attraction than on love, and makes Proctor feel guilty every time Elizabeth brings it up.

The relationship is symbolised by the high temperatures and reactions that take place in a crucible. Heat and fire can be used to illustrate Abigail and Proctor’s hidden feelings. Here Abigail is reminding John of his hidden feelings, in an attempt to make him want her again ‘I have a sense for heat, John, and yours has drawn me to my window, and I have seen you looking up, burning in your loneliness.

‘ As rumours and lies spread through Salem, neighbours begin accusing one another in an attempt to hide their own flaws.

If members of the community seem to be keeping to themselves, people took that as a sign that a person has some terrible fault to hide. When the pressure mounted upon an individual becomes too great, the person either confesses or is left to hang; thereby leaving them free from the impurities of injustice. In the courtroom, the bewitched girls and powerful authorities put the innocent defendants and the community under extreme pressure. The defendants are pressured into confessing, while the community is pressured into condemning and outlawing the innocent.

In a crucible, metals are permanently changed from one thing to another. As characters in the play buckle under the pressure, they begin revealing some of their deeply hidden qualities. For some like John Proctor, they’re good qualities. But for the majority they bad, and come through in people like Parris, Putnam and Danforth. Fire and heat are symbols also used by Judge Danforth in Act Three. With a strong belief in authority, Danforth metaphorically warns Proctor,  ‘We burn a hot fire here; it melts down all concealment’.

Сonnections between Salem and Hell

Throughout the play, Miller unmistakeably makes connections between Salem and Hell. Through Proctor, Miller relates the intense heat and pressure of Hell to that in a crucible. ‘A fire, a fire is burning! I hear the boot of Lucifer, I see his filthy face! And we will burn, we will burn together! ‘  The more easily understood meaning of the word crucible is a severe test or trial. Miller concentrates the most on John Proctor’s test. After being falsely accused, Proctor is put through a huge test where he struggles with his soul on the morally right thing to do.

Eventually it comes down to one statement, ‘Give a lie or die’. After being faced with the statement, he searches and finds the good inside of him. He dies a martyr: thereby being cleansed of his mortal sins. Before Proctor is sentenced to hang, he gets a chance to talk to Elizabeth. While talking to her he says: ‘Would you give them such as lie? You would not; if tongs of fire were singeing you, you would not’  This quote clearly shows Proctor relating Elizabeth’s conscience to an image of fire. By using fire, Miller symbolises its association to a crucible.

A crucible is used to separate the impurities from the pure matter. So in essence the witch trials were an attempt to separate the ‘good’ from the ‘bad’. By connecting the Salem Witch Trials to a crucible, Arthur Miller makes us search deeper into the characteristics of human behaviour, when put in certain predicaments. When we are fully able to understand the imagery used by Miller, only then will we be able to understand what happened during the Salem Witch Trials and more importantly the occurrence of ‘McCarthyism’. 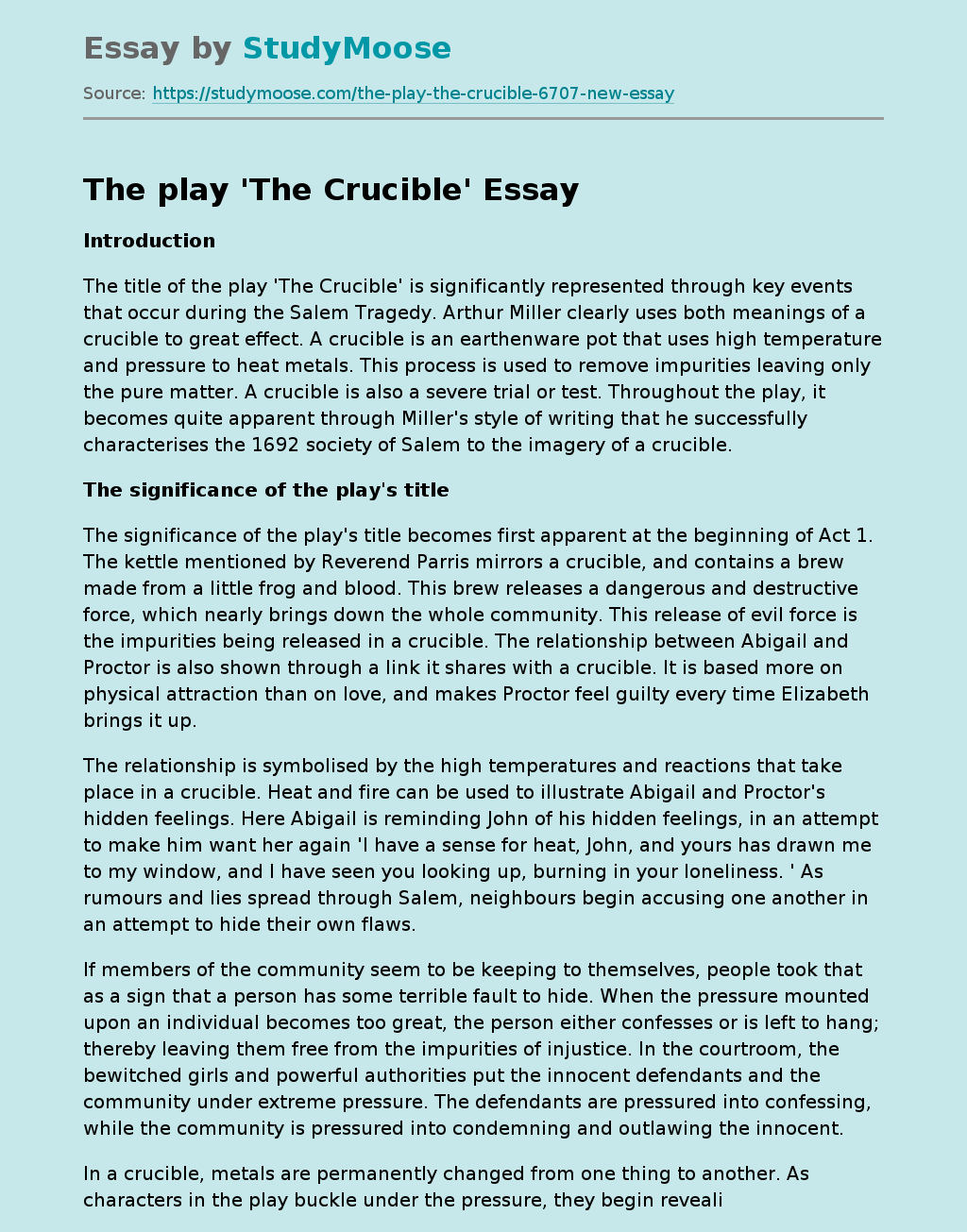