Don’t waste time
Get a verified writer to help you with The Pest Analysis of Uk Food Producing Industry
Hire verified writer
$35.80 for a 2-page paper

PEST is a model that being used to analyze the board macro-environmental of a company or an industry. The key factors of an external environment will possibly influence particular strategies successful or failure. These factors mainly divide into four aspects: political, economic, social, and technological(PEST Analysis, 2012). As a traditional industry, food producing is also influenced by these external factors. However, with the development of neoteric agriculture and the evolvement sense of food producing of modern people.

This industry faces more risks, and the PEST factors are becoming more important than before.

With more and more scandals about food safety arose, how to set customers’ minds at rest and to win their trust are becoming big troubles to food producers’ developments. Thus, controls of government are essential, and have a strong influence to food producers. During the summer of 2011, the E. coli cucumber scare had made lots of people lose their lives and had caused huge amount of loss(BBC, 2011).

Definitely, the food producing industry was the worst one, because most of European countries had banned their vegetables’ import and many companies had to stop their producing then bore millions of loss because of lack of raw materials.

On the other hand, controls of producing process also have great impacts on this industry. After the audit report of meat establishments reported on 1 November 2011, FSA(Food Standard Agency UK) had raised the meat establishments standard, which would no doubt increase the cost of processing(FSA, 2011). Food producers must think of the political risk deeply because the controls of government make food safe, but at the same time, they raised the doorsill of entering this industry.

Mislabeling has always made customers be confused, nevertheless, to make the labeling transparent means higher cost at the same time. The government always tried to do so to make foodstuff worth trusting, for instance, FSA made a guidance note on the composition and labeling of foodstuffs suitable for people intolerant to Gluten(FSA, 2011). Even the transparent labeling and processing may bring more profit to them, these regulations request food producers invest more capital on their food compositions. The scandal of Daybreak’s mislabeling children’s breakfast cereals, Ready-to-go, lost large number of consumers(Iwonna, D. & Margaret, O., 2011). The labeling transparency policy is a two-side blade: companies must invest more money on their products, otherwise, they will lose their profits.

During the year of economic depression 2011, almost every industry involved with the trouble of lack of investment capital, no except for food producing. Without enough capital, companies must give up expanding and lots of their businesses. Furthermore, the impact of financial crisis also made the market reduce fiercely. Less abilities of domestic purchasing, result in less profits to the companies. That endless circle might damage or break many companies’ cash-flow chain and might cause a range of troubles. Besides, less exports of products would also influence the international development of companies.

Cost of labour is directly related with cost of producing. Though the unemployment situation was becoming more gravely in Europe these years, still it will economize dramatic amount of capital to use labour in developing countries, such as China and India. It is really a dilemma to many companies, special for multinational companies.

Michael, H.M., Arthur, I, S., and David, K, E.(2011) have pointed out that Most world money centers have established foreign currency futures markets. A stabile currency rate is the guarantee of each transaction, however, after the financial crisis, most of the world’s currency showed their instabilities. The institution of exchange rate gave a broken line of British Pound to Euro exchange rate history in appendix, which showed great diversification of currency rate(ExchangeRates, 2012). Companies will take invisible loss due to each transaction of using foreign currency because of currency rate of instability. On the other aspect, depreciation of domestic currency will also bring lots of pressures to food producing industry, they must balance the currency rate risk and pay more attentions to foreign currency exchange.

It can be seen that guidance of public opinion might bring either huge profits or loss to an industry or a company easily. For instance, Fi Europe 2011 has attracted more people than before years and has brought plenty of customers to those companies on show(Ingredients Network, 2012). But on the other side, there will be dramatically capital loss if press reports some scandals of companies as it has already mentioned above. Some conclusions of biological researches will also influence some types of products either good or bad.

After some unpleasant events, for example, the E. coli cucumber scare, people pay more concentrate on food safety issue, which brings more challenges and opportunities to the food producing industry. The challenge is: they must avoid to be one of the role of these scandals, focus on investigating their producing process and make sure all their food is safe, and definitely, it need to invest more equity and human resources. The opportunity is that they can make more profits from producing or selling safe food, obtaining nice goodwill by showing their safe producing process.

Research and development is a core department of a food producing company. The scale of it is decided by external technology development and scale of company itself. Because most of its works are to make the product more competitive to other companies’ products, the change or evolvement of other companies’ products consist of its external technological environment. To the whole industry, the board macro-environmental factor of technological means the evolution of produce and technique of process. To make more nutritional and delicious food will increase the customers’ desire of purchasing and will make more profits.

With the development of biology and science, and the world’s increasing need of grains, more and more food producing companies are facing the same question: whether use new technique foods, such as GM foods(genetically modified foods), or not. By using these GM foods, food producers can easily reduce their costs of raw materials because they are easy to grow. However, the potential risk of this kind of food is unknown, they may do harmful to people, even the human beings. According to the research that WHO has done, these GM foods do have potential harmful, but they are improving them(WHO, 2012). In recent year, more and more Europeans start to boycott GM foods. This situation of dilemma influence this industry quite a lot. 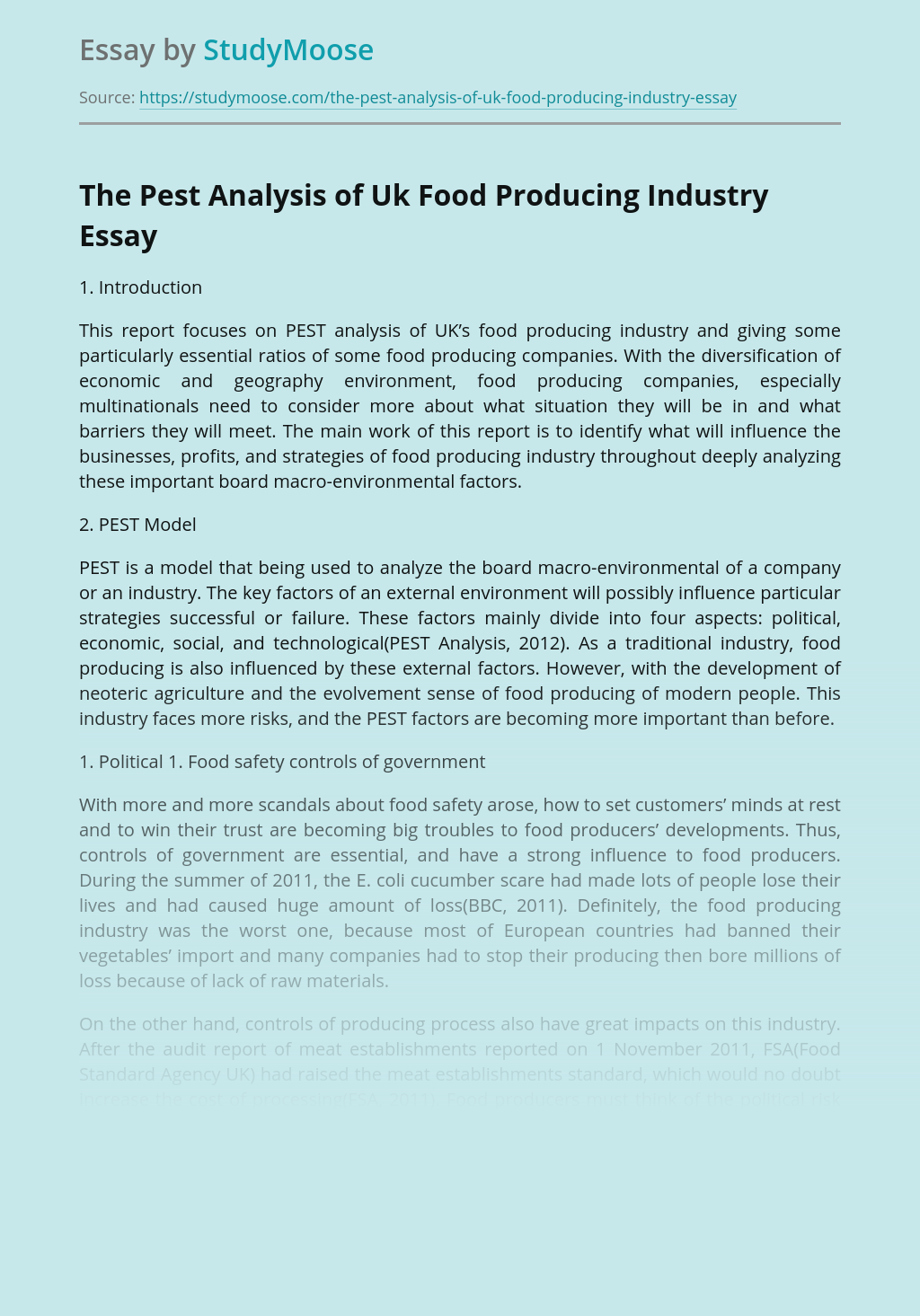 Don’t waste time
Get a verified writer to help you with The Pest Analysis of Uk Food Producing Industry
Hire verified writer
$35.80 for a 2-page paper
Stay Safe, Stay Original