In the perfect world, people would do common activities and share common interests. Everyone would hack, fly and ride. One common interest that people would share would be computers. Everyone would own a computer, a good computer (preferably not a Mac). Computers would be fast, faster than any computers in existence today. There would be a minimum on the amount of memory that a computer would be required to have.

Twenty Gigabytes of hard drive space and 100 Megabytes of Random Access Memory (RAM) ,would be considered a small family computer.

With the demand for technology, created by extensive use of computers, the world of computers would expand rapidly. The Internet would explode with popularity; everyone would write homepages and visiting other people’s pages would be a leisure activity. Personal mail would all be sent electronically. The need for a postal service for personal mail and quite possibly business mail as well, would be eliminated. Many interactive programs would be available; people’s interaction would be limited only by their imaginations.

The changes in technology, due to more interest in computers would make life easier for all. Life being easier, people would have more free time for leisure activities such as flying. A common interest in flying would be present in the perfect world. Most people would be pilots. There would be a lot of flying clubs and social flying would be enjoyed by all those who could. Those who could not fly and those who would not have their licenses would at least express interests in flying. There would be no need for commercial airlines to transport people over long distances, since most people would fly their own planes. Those people without pilot’s licenses would have to get rides with friends or neighbors or resort to driving. “Plane pooling” would be encouraged. In the perfect world, the increased use of airplanes would mold transportation and recreation into one. The shared interest of all people in flying would lead to advancement in that activity.

Planes would be developed that would fly faster and further and would use less fuel. New styles and models of planes would be developed. Envelopes (the structural limits of planes) would be enlarged and new planes would be capable of maintaining flight in abnormal attitudes. Planes would be capable of pulling more positive g’s and pushing more negative g’s. The cost of planes would come down with the higher demand for them. The advancement in aviation in the perfect world simply reflect the demand for the activity of flying. As pilots, people in the perfect world would have to ride motorcycles or at least drive fast cars. This would be necessary in order to maintain the “pilot jock” image that is present in the world today. Pilots would be required to own and maintain a sports car and/or motorcycle. The reason that a pilot would need a vehicle as a means of transportation would be for the little trips, the trips around the block or across the city, the kind of trips too short to fly.

An interest in flying would therefore create an interest in cars and motorcycles. Motorcycles would be the vehicles of choice. Cars would be used mainly during the winter on rainy days; or cold days, when riding a motorcycle would be uncomfortable. The motorcycles that people would ride wouldn’t be “Harley” type motorcycles, but rather the really fast racing type. The “need for speed”, would be felt by all and posted speed limits would be 150 km/h (a limit that would still be ignored). In the perfect world, transportation would always be fast. Common interests, shared in the perfect world, would be beneficial to all. New horizons would be reached in areas of interest.

Advanced technology in computers would make for a much more technological world. Without people disagreeing and arguing all the time, life would be much easier. With everyone participating in the same activities, a strong feeling of unity would be created. People would have common links joining them together and therefore a stronger society would be established. There would be no controversy or objection to progress. The aviation world would expand and with it the industry for sports cars and motorcycles. A world in which everyone agreed would be perfect and would allow for technological progress, societal stability and easy lifestyles. 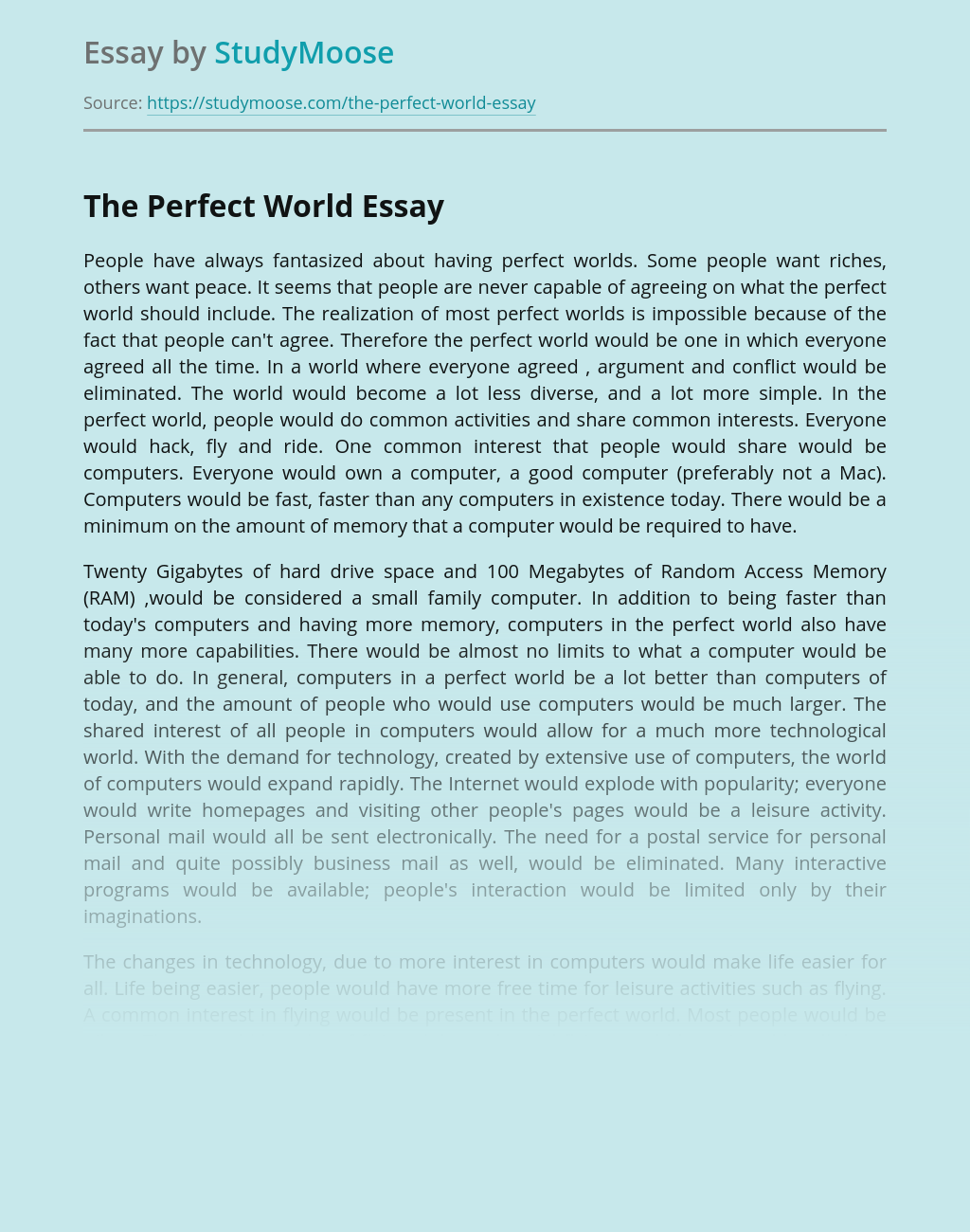